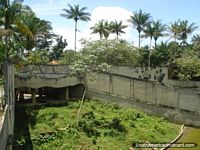 Walk the bridge over the tigers enclosure at CIGS Zoo in Manaus. 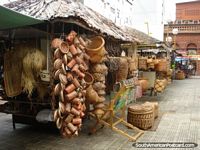 Cane baskets and bags for sale in Manaus. 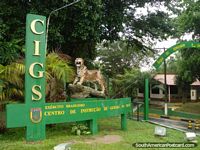 The entrance to CIGS Zoo in Manaus. 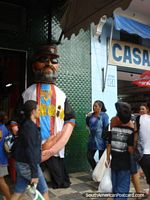 I came to Manaus on a 12hr bus journey from Boa Vista in the north. I planned to stay a few days, have a look around and decide whether to go east downstream on the Amazon River to Belem on the coast or west upstream back to Colombia. I stayed in a hostel in the center of town on a main street near many of the city's popular sights.

The first place I was interested in exploring was the waterfront area on the banks of the Amazon River. The area near the river is called Centro. The streets are bustling with people and activity and there are shops and food stalls by the dozen and interesting market areas. I started off at the big park where there is the white and mustard colored church Igreja Matriz de Nossa Senhora da Conceição originally constructed in 1695. It has great staircases leading up to it from both sides that have a succession of images of Jesus carrying his cross. In the area at the foot of the staircases there is a gold fountain feature that has many sculptures of children dancing around it and blowing trumpets at the top. Outside the park on the street there is an impressive clock tower with bells at the top.

The Riverfront is a Circus

Across the road is the busy river area with markets and much activity around the boats with people loading and unloading goods. It is actually like a circus down there. I gazed in wonder at all the boats from the street above, the people working were like little ants, a constant trail of men carrying boxes or pushing carts on and off boats to and from trucks. Some trucks full of stacked up fruit worked from the street, pineapples, bananas, watermelons and other produce were being offloaded and counted before being taken down the stairs onto the boats below.

The 3 deck passenger and transport boats were loading people ready to travel to all sorts of different places including Belem, Santarem, Monte Alegre, Tefe and Porto Velho and many others. Men sell tickets for these trips from up on the street.

Markets Near the River

The markets up on the road are a great place to explore, but a little grubby with rubbish and vultures hanging around on the rooftops and diving down to eat the scraps of meat and bones on the ground. Being sold on the street were shrimps, prawns, red and green chilly peppers, some interesting herbs, spices and remedies. One was called Unha de Gato which in English means cat's claw, the packet said it is good for helping arthritis and cancer amongst other things. Back from the markets are many souvenir shops in a little park area. Some nice things including colorful wooden faces of natives to hang on the wall, things for shelves like wooden animals and birds, jewelry and beads, cool keyrings, musical stuff like maracas, wooden flutes and pipes, also cane baskets, bags and bright colored feather earrings.

The Opera House and Justice Palace

I headed away from the river to the historical area and the opera house Teatro Amazonas, it was built in 1884 and took many years to complete before the first performance in 1897. It is quite a spectacular building with its huge green and yellow colored dome at the top. The theatre itself is a pink color with white trimmings, windows and portholes. From the road, stone stairways lead up to the theatre and gardens, the gardens have statues in all corners and nice pathways and fauna. Across the road is the Palace of Justice, a pale yellow and white colored building with pillars and balconies. From the theatre gardens you can also see the nearby church Igreja de Sao Sebastiao with clock and belltower. Beside the church and theatre the large plaza with a striped and curvy design on the ground made of little pieces of rock create a confusing feeling, kind of like being in a room full of mirrors. The impressive monument in the middle is dedicated to the great continents of the world, the Americas, Asia, Africa and Europe. It was now the end of the day and I went back to my hostel.

I continued looking around the center of Manaus the following day visiting Park Heliodoro Balbi Roosevelt Gonçalves Dias. It has nice gardens with bridges and walkways through trees and fauna, there is a bandstand and water feature. There are plenty of statues and monuments of interest also, to poet and folklorist Bruno de Menezes (1893-1963), to D. Pedro I (1798-1834) - founder of Brazil and to writer and journalist Jose Maria Ferreira de Castro (1898-1974). There are others including one of a wild dog attacking a wild bore.

Right beside the park is the Provincial Palace, a great orangey red and yellow building with arched doorways and balconies, at the entrance are 2 figures (monuments) holding long rifles dressed in traditional clothing. Inside there are museums, an art gallery, image and sound, archeology. There is a restoration studio for works of art and paper, they have exhibitions and shows and events in the hall.

I had read somewhere that the zoo in Manaus known as CIGS was quite good so I decided to have a look that afternoon. It takes only about 15mins to get there from the central city by bus. The zoo is run by the army so it is a zoo with a difference, it is more like an army base with a zoo as part of that. There are a small bunch of animals here, not that many really and they certainly are not running around free like I had read they are. Animals include Night Monkeys which I didn't see any of because it was daytime, Squirrel Monkeys, birds such as the Bare-faced Curassow, funny Spider Monkeys who loved to show off and dance around in their big area in the middle and Capuchins Monkeys. There is a Crested Eagle, Crocodiles, a Tiger, Amazon Parrots, Turtles, a Mantled Hawk, Boa and Anaconda Snakes, a Tucan, Red and Yellow-footed Tortoises, Blue and Yellow Macaw, Pigs and other animals in caged areas. It was a nice visit to the zoo however I wouldn't rate it as a super high thing on the list of things to do in Manaus. It's a little run down and shabby, maybe if they tidied it up a bit and had better viewing areas for the animals that would be good, maybe a few more animals perhaps also.

After 5 nights in Manaus I had decided that I would buy a ticket for a boat heading upriver to the border of Colombia for which I wanted to return. I spent the next 6 nights sleeping in a hammock on this amazing journey.


View all photos in the Manaus Photoset

Hostel Natureba, Manaus, Brazil (February 2011 5 nights) - In a good location in Manaus near many sights in the center of town. There are dorms with or without air-con, basically if someone pays for air-con the rest in the dorm get it free. There is a kitchen, restaurant, tv/living room, washing machine. Not the most fun place I have been in, but fine for a relaxing few days. Book your boats for the Amazon from the port, not from the tour desk here, it's much cheaper.
Brazil Travel Blog | Photos of Brazil | Festivals in Brazil | South America Videos 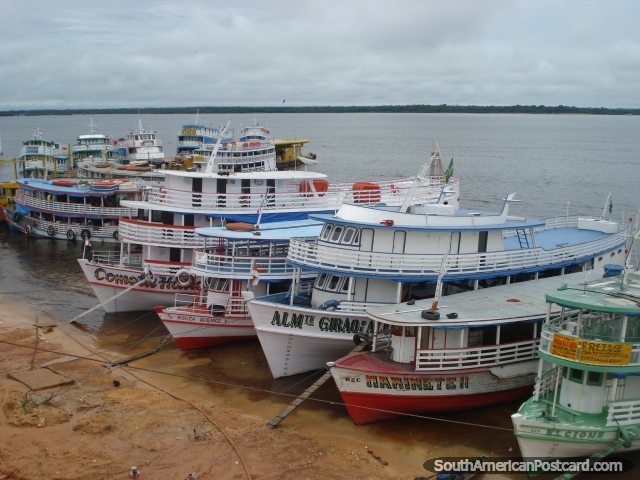