Sunset with large ships in the distance in Santarem.

Sacks of oranges upon a cart ready to be loaded aboard a ferry in Santarem.

City of Santarem with the blue cathedral down on the Amazon riverfront.
Map location: Santarem, Brazil

My 2nd time in the Amazon started in the city of Santarem, it took me 24hrs to get here from northern Colombia with 2 flights down to Leticia, a motorbike taxi across the border to Tabatinga - Brazil for a flight to Manaus, then a long wait at the airport until the flight to Santarem. Santarem is very much in the heart of the Amazon and sits about halfway between Manaus to the west and Belem near the east coast. My first time in the Amazon 4yrs earlier was spent in Manaus and on the river west of Manaus, this time after seeing around Santarem I planned to head east! From Santarem airport I got a ride into town with a father and son at a price cheaper than a taxi.

The River is Where the Action Is

All the action and activity in this town is based along the river, ferry after ferry after ferry with people everywhere on and around them. People loading and unloading carts of produce and products of all kinds. Across the road from the river are many warehouses with products stacked up to the roofs, Santarem is a very busy place! Along the footpath above the docked boats are various monuments including: outside the marina a gold bust of Francisco Manoel Barroso da Silva (1804-1882) who was commander of the Brazilian fleet in the Paraguayan War. The others are of animals, a dolphin, fish and turtle. The fish market is interesting, I was there before 9am and there was a ton of fish, some strange looking ones too.

Buy a Ferry Ticket to Belem at the Port

Next I wanted to find out about a ferry to Belem which leave from the main port (Porto do Santarem) which is about 1km walk from the fish market, it took me 20mins. You can take a ride on the back of a motorbike to get there which is what I did on the way back. I bought a ticket from one of the offices at the port for a ferry to Belem leaving a couple of days later. It cost 130 Reals (about $40USD) and the trip I was told would take about 48hrs (it actually took 43hrs).

From here on a motorbike taxi I headed to the center of Santarem's historic area - the blue church and spent the whole of the rest of the day exploring the city. The cathedral was built in 1761 and is probably the main sight to see. There is not that much to see in Santarem as far as historic buildings go, you have to walk a lot around the city to find them, they are not all together. Beside the church is a history and art museum (Museu de Historia e Arte Sacra). Very nearby is the Solar dos Brancos, an historical building with a tiled facade. At the eastern end of the footpath along the riverside are restaurants and a few other historical buildings that are currently being restored (near plaza Praca Barao) which includes the Centro Cultural Joao Fona building built between 1853 and 1867. Nearby is the fishermens plaza Praca do Pescador with its gold statue. A block from here is the theatre Teatro Municipal Victoria and from there I could see another church in the far distance which turned out to be Paroquia Sao Raimundo Nonato. In front of the church is a small plaza called Praca do Centenario which has a pond of small turtles, a cannon and a few monuments. This plaza is only one street up from the waterfront and very close to the Tapajos Ferry Terminal from where locals travel to the other communities near Santarem - Alenquer, Monte Alegre, Juruit etc. I walked to the end of the wharf to photograph a white stork and enjoyed the views from there for a while before I went hunting for more sights. Another church - Igreja Batista, the college - Colegio Santa Clara, old wooden houses, another plaza - Praca Tiradentes and the central shopping area - Belo Centro Tapajos (2006).

Down in the area in front of the cathedral are many stalls selling hammocks, this is where I bought mine for the ferry to Belem. It was quite cheap at around 40 Reals ($13USD), there is honestly about 1000 to choose from!

In the evening along the waterfront you can buy food like BBQ meat on a stick or visit a boat restaurant like I did called Restaurante da Dona Graca, she makes a great cheap meal!

How to Get to Alter do Chao

Next morning I took a local bus 1hr to Alter do Chao - a nice beach, island and small town, to spend a few hours. It is actually a destination, you could spend a few days enjoying the beautiful surroundings here and there are hostels and other accommodation available too. Being late March the Island of Love (Ilha do Amor) was somewhat submerged, the best months to come are between August and December. Lago Verde, the huge lagoon can be explored by canoe or with a tour to see various birds and animals. I walked along to the beach area where chairs and tables sit slightly in the water, you can have a cold drink and relax, swim, eat, it's really quite nice just to do that! The town is quite small and has many indigenous art stores, some restaurants, a church, plaza and bus terminal. Alter do Chao is definitely the place to visit if you are in Santarem for a few days!

East by Ferry on the Amazon

The next day I made my way to the ferry for the trip east along the river to Belem.


View all photos in the Santarem Photoset

Hotel Sao Luis, Santarem, Brazil (March 2015 - 3 nights) - My room was infested with cockroaches, I killed between 15 and 20 living in my room during the first 2 days I was there. That is the reason I never ate at the hotel's restaurant! Around $22USD per night for a room with a small bathroom in the corner. Best thing about this place was the good wifi connection and the location in the center of town. One evening the night-watchman knocked on my door and asked if he could borrow $5 Reals to give to another customer as change. He came into my room and was basically hanging over me watching me looking to see if I had the $5 Reals. He didn't return my money in good time and I had to go out to reception and make a scene to get my money back - totally unacceptable! In the morning before 7am the woman worker made so much noise in the hallway outside the rooms that it woke me up and I had to go out and ask her to keep the noise down, for which she gave me a very dirty look. I was glad to leave this place/dive and I cannot recommend it. There are other cheap hotels nearby, give-em a try!
Brazil Travel Blog | Photos of Brazil | Festivals in Brazil | South America Videos 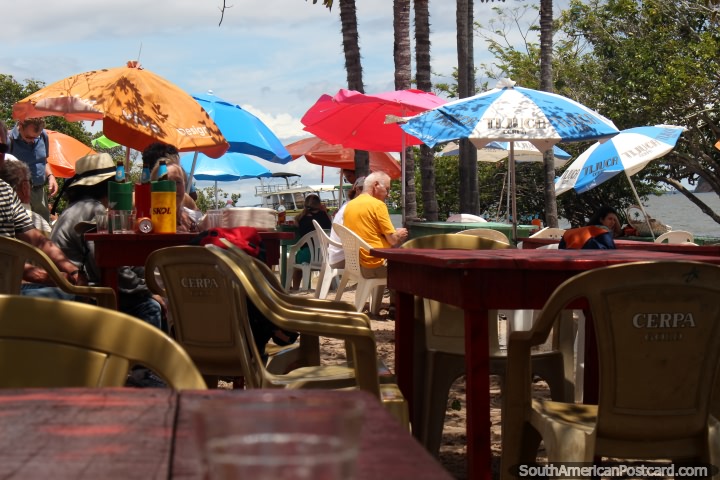