Pacaraima to Boa Vista, Brazil - Full Speed Ahead At 140kms Per Hour 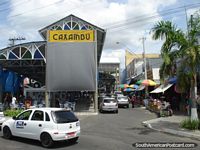 The markets of Caxambu, the central commercial area in Boa Vista. 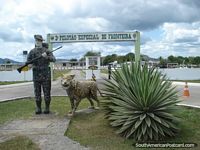 The base and monument of the Special Platoon on the border with Venezuela in Pacaraima. 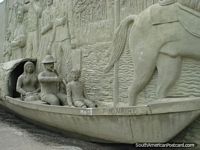 The pioneers in the boat, the sculpture in Boa Vista beside Orla Taumanan. 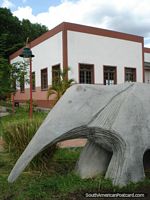 The anteater sculpture in the historical area beside Rio Branco in Boa Vista.
Map location: Pacaraima to Boa Vista, Brazil

After crossing the border from Santa Elena in Venezuela to Pacaraima in Brazil I took a co-op taxi south to Boa Vista. At times the speed was between 120kms and 140kms per hour. It cost $25 Reais ($15USD) and took over 2 and a half hours and included a coffee stop along the way. Pacaraima is a quiet place, not too much here, just a few shops, unpaved roads and the Special Platoon looking after the border. There is an interesting monument outside the platoon headquarters of an army man holding a rifle and a tiger on a leesh.

The Road to Boa Vista

The road to Boa Vista is straight and fast mostly but there are potholes and many rough patches at times, luckily the taxi driver slowed down at these parts. The journey passes through farmland, green hills and open space through a place called Boca Da Mata. On the hills beside the road sometimes you will see rock and boulder gardens amongst the trees. Before crossing the bridge over the Rio Jauari we made a brief stop for a bite to eat and coffee and exchange a couple of passengers. Coming close to Boa Vista where a road sign said that it was 756kms to Manaus and 511km to Divisa RR/AM. The bridge on the north side of town over the river has a sandy beach where people were swimming, this brought us into Boa Vista.

Hotel and ATM in Boa Vista

I asked the taxi to drop me off near the center at a cheaper hotel and near an ATM machine. I hadn't used my ATM card in over 7 weeks in Venezuela because of the bad exchange you get with them there and I was looking forward to getting money without hassle. Apart from the taxi ride the next signal that Brazil was going to be quite expensive was the $45 Reals ($28USD) I had to pay for a very basic room for the night.

The first thing I wanted to do in Boa Vista was go to the bus terminal and buy a ticket to Manaus for the next day. A good 30 minute walk later and drenched in sweat I found a ticket for the following evening. It's 12hrs from Boa Vista to Manaus and the price I couldn't believe, $100 Reals ($62USD : over $5USD per hour of traveling time). Now that is expensive, the most expensive bus I have ever taken in South America, period! Anyway, I bit the bullet and went to the supermarket to buy some very basic things to eat in my room, bread and cheese and an apple. The next day I had the whole day free to explore the city before the bus that night.

The first thing I found was the theatre Carlos Gomes (1836-1896), not such an attractive building from the outside. He was the 1st composer of new world music to be accepted in Europe. Nearby is a small old green and white church Iglesia Sao Sebastiao and the big park Parque Anaua. Beside is a nice monument to the miners with 3 small palm trees and gardens with orange and yellow flowers. Nearby is the palace Palacio Senador Helio Campos and the temple.

I decided now to walk towards the river Rio Branco in the south of the city passing through the central commercial area Caxambu with its markets, eating places and pool table bars. The local bus terminal is also here. The area alongside the river is the nicest part of town that I found. Its called Orla Taumanan and has plazas and parks, restaurants, beer gardens and great views of the river. It is a popular place on weekend nights. Tours on the river can be taken from boats that leave from here to waterfalls and to see the sunset.

Monument of the Pioneers

Near the entrance of Orla Taumanan across the road is the Monument of the Pioneers, it represents the union of the natives and the first people who populated and developed this part of Brazil. The display focuses on Macunaima, the first inhabitant of Rio Brancos fields. It was sculpted by Luiz Canara. It is an amazing piece of work with a real 3D effect.

Back to the waterfront and onto the platform Wiequepa for views up and down the river, of bridges, little beaches and shanty river houses. The 2 platforms are called Wiequepa which means sunrise and Mereme meaning rainbow, they have stages for outdoor concerts. The historical area around here is pleasant to walk around, gardens, old buildings, an anteater sculpture, parks and a mustard yellow colored church Paroquia Nossa Senhora Do Carmo.

I walked back through town to get my backpack and things from my room and kill some time for the rest of the afternoon in an air-conditioned internet cafe and with a beer or 2. Time to begin the walk to the bus terminal but this time with a small and large backpack plus my guitar. However, this didn't stop me taking some photos of some churches I found along the way, the blue and white Iglesia de Nazare and one other green one. Through the night for 12hrs and 645kms the bus winded its way through the jungle on a sometimes rough road. There were a couple of very short snack breaks and I arrived in Manaus early in the morning as the city woke up.


View all photos in the Pacaraima to Boa Vista Photoset


My Hostel & Hotel Reviews for Pacaraima to Boa Vista, Brazil:

Hotel Ideal, Boa Vista, Brazil (January 2011 - 1 night) - I was put in a room not actually in the hotel, it was next door and not very nice, they charged me around $27USD for this. The next day I asked if I could stay a few extra hours until late afternoon before catching a bus, they said this would cost $15USD, so I didn't do that. The staff were unflexible and not friendly and I cannot recommend this place at all, I found it in the Lonely Planet.
Brazil Travel Blog | Photos of Brazil | Festivals in Brazil | South America Videos 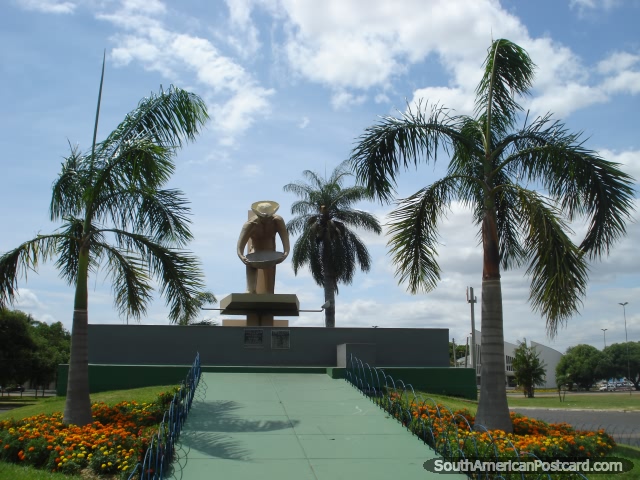