Baskets of green mangoes ready to be delivered from the Belem port area.

Baskets of mangoes by the wharf at the Belem port area.

At first glance Belem doesn't look so appealing but in reality it is a very interesting city with many sights and historical buildings to discover around the center. I arrived in Belem at the port after a 43hr Amazon River journey by ferry from Santarem towards the west. Belem was founded in 1616 and is the gateway to the Amazon Rainforest in the Bay of Guajara near the eastern Brazilian coast. I stayed in a hotel in the heart of the historic area near the river and markets.

The first place I visited was plaza Praca D. Pedro II which has many colonial buildings around it and views of others in streets nearby. This plaza is across the road from the river and is very much in the center of everything you want to see in Belem. The monument in the middle features lions and statues with the statue at the very top being of Hilario Maximiano Antunes Gurjao (1820-1869), a military man. The plaza has lots of trees and walkways. Better still are the interesting buildings all around the plaza. The palaces Palacio L. Sodre and Palacio A. Lemos, The Museum of Art and other smaller colonial buildings on another side. All facades are well-kept. Across the road is the iron-cast clock tower which came from England. From the clock tower you can see a street beside the river with a line of old colonial buildings along one side.

From around the iron clock tower you can see the fortress Forte do Presepio up a slight hill. I walked up a derelict cobblestone street with a train track down the middle to get there, 2 mins walk. The area around the fortress is very nice with green lawns, paths, artworks and views of the river. A stone archway, a cobblestone path, then a bridge across a lower path brings you to the fort entrance. The top part of the fortress is in a circle shape with cannon pointing out towards the sea in all directions. From this vantage point you can see tiled roofs and the cathedral with historic buildings all around. Also the view of the port and city is fantastic from up here! The fortress is in great condition and also has a museum and archaeological information to read.

The Most Beautiful Plaza

From the fort I headed towards the huge white cathedral which has a plaza across the road called Praca Frei Caetano Brandao, this is the oldest area of Belem. This is a beautiful plaza and the thousands of red flowers give the white cathedral a nice contrast. You can buy fresh cold coconut juice straight from the coconut and sit to enjoy the surroundings of this most beautiful part of the inner city. The plaza has a central monument of the man it is named after. The interior of the cathedral has beautiful facades and fittings. On the other side of the plaza is another church called Igreja da Se which is also a standout historic building.

From Plaza Frei Caetano Brandao I walked a few minutes back to the waterfront around the central market Mercado de Ferro do Ver-o-Peso which is marked by the huge blue building that has a tower on all 4 corners. It was built between 1899 and 1901. This is an area of the city you need to be careful in, there are people sleeping rough, drunks, drugs and thieves all about. But it is perfectly safe if you stay aware of what is around you. It is an interesting and lively place as you would expect from a large market area. There is also a huge food hall where you can sit and have a nice big meal for $10 Reals ($3-4USD). Beside the market is a derelict historic building called the Solar da Beira. I walked up the stairs and took a few photos out of the windows but I wouldn't recommend doing that particularly because there were dodgy out-of-it people laying around the place.

Across the road is the historic facade of the Municipal Market. From here I walked a few minutes and came to plaza Praca das Merces which has an historic church that goes by 2 names - Igreja de Nossa Senhora das Merces and Covento dos Mercedarios, last restored in 1753. The plaza has a statue of politician Jose da Gama Malcher (1814-1882) as well as historic buildings all around it. On the upper side of the plaza are streets with shops, food, hotels and more interesting colonial facades. Other buildings I saw while walking to plaza Praca da Republica in a nearby part of the city included Palacio Cabanagem (the Legislative Palace), Baroque church Capela de Sao Joao Batista, the pink facade of the O'Cosmorama building and statues opposite the yellow church Igreja de Sant' Ana (1782) at plaza Praca Maranhao and the colonial baroque church Igreja de Nossa Senhora do Rosario dos Homens Pretos. I arrived at Praca da Republica and saw a plaque that said that this is the site called Pioneer's Bench where 2 Swedish missionaries Daniel Berg and Gunnar Vingren prayed to God and ate mangoes in 1910 after landing ship Clement. In 1911 they founded the Apostolic Faith Mission (Assembly of God) in Belem.

Plaza Republica is a very large park and has some fantastic buildings to see including the pink theatre Teatro Waldemar Henrique and the prestigious theatre Teatro da Paz. Across the road from here is the antique fountain in plaza Praca da Sereia. I then walked past the red flowery plaza Praca Barao do Rio Branco which has a bust of Dr. Ruy Barbosa (1849-1923), a politician and diplomat. Across the road is church Igreja da Santissima Trindade, built in 1802, rebuilt in 1941 and a bust of Jose Maria da Silva Paranhos (1819-1880), a politician and journalist. I found quite a bit of street art around the city on my travels, much of it was on shabby side-streets.

Back down near the river and markets is a statue of Pedro Teixeira (died 1641), he was a Portuguese explorer and the first European to travel up the entire length of the Amazon River, he has a plaza named after him of course! Between this plaza and the Ver-o-Peso markets is a very flash section of the waterfront area in Belem. This area has a cobblestone pathway beside the water underneath an archway of yellow wharf cranes. Also there is an old train engine monument plus restaurants and bars. On another day I was in the area around plaza Praca da Bandeira where there are many flags flying, some cannon, a Simon Bolivar bust and a big red fire station. Also there is the green historic building of the military Quartel General.

Ferry Ticket at the Port

I walked to the port to get information about a ferry north to Macapa passing a few sights along the way - plaza Praca General Magalhaes Barata and some graffiti art and historic buildings. You are never far away from things historic in Belem it seems. I enjoyed this city a lot, it is actually one of the more dangerous cities in Brazil but as long as you stay inside at night and keep your wits about you, you should be fine. From Belem I took a ferry north 26hrs to Macapa.


View all photos in the Belem Photoset

V5 Hotel, Belem, Brazil (April 2015 - 1 night) - Before I left the other hotel I was staying at in Belem where the internet had been down for 2 days, I found the V5 Hotel nearby. My first question was if the internet was working and I was told yes! So I came here and payed good money for a nice room (around $30USD). The V5 Hotel is very nice indeed. It's located very close to the yellow cathedral in the old city. My room was very comfortable with air-con, fridge, tv, balcony and private bathroom with hot water and the staff were very helpful and friendly. This is the best hotel to stay at in the old city area for the price. I wish I had moved to the V5 earlier. Recommended. (www.v5hotel.com.br)

Hotel Vitoria Regia, Belem, Brazil (April 2015 - 3 nights) - Located in the center of the old city in Belem. Seemed like a nice place. The woman owner is very unfriendly, she didn't like me from the start and I felt the same about her. I had a room with air-con, bathroom, a fridge and a tv with nothing worth watching for just over $22USD per night. The wifi worked for the first 24hrs but never did again after that, even then I had to sit right beside my door to get a connection. Breakfast was included each morning which was good. At night I ordered food from delivery people who brought it to my room. But the most disgusting thing were the pillows on the bed, old pillows with the foam falling out wrapped in new pillow cases. In the middle of the night after waking up, I found myself laying in a pool of foam pieces, it was everywhere and it was absolutely disgusting. I scrapped it all up with my feet and kicked it out the door. The hotel is probably better than the other 2 places nearby in the same street but take it or leave it. It's a dive in disguise. I'm sure there are better places to stay than this and there is! I moved to a new hotel nearby the next day.
Brazil Travel Blog | Photos of Brazil | Festivals in Brazil | South America Videos 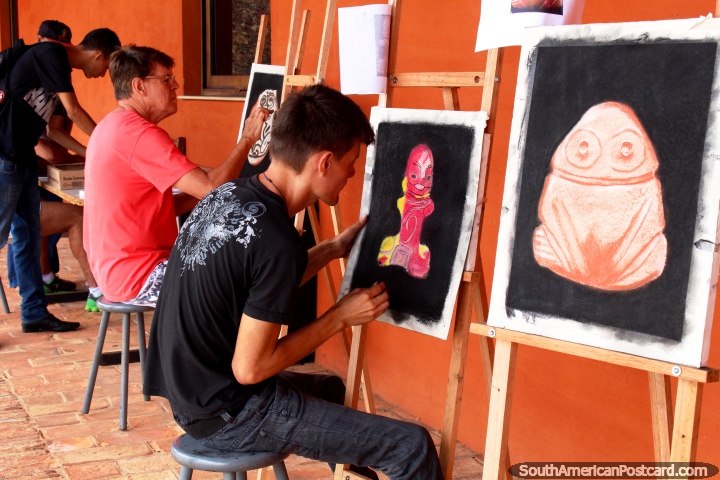