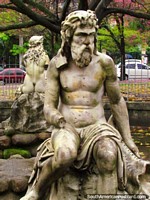 A bearded male artwork at Park Independencia in Porto Alegre. 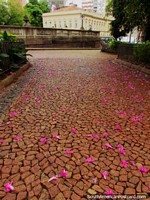 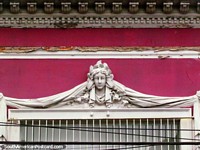 Face at the top of a window on a pink wall, facade in Porto Alegre. 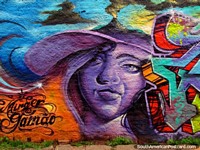 Porto Alegre is an interesting city to explore. I came here not knowing what to expect but I knew there were sights to be seen from photos I had viewed on the internet, it is also recommended in Lonely Planet. I arrived from the city of Rio Grande 4hrs 40mins south. A man at my hotel there told me I shouldn't go to Porto Alegre because there is nothing to see - he must be blind. Porto Alegre is a modern city and is full of amazing neoclassical architecture plus has awesome graffiti art to be discovered in the streets around and near the port. On my first day in town I spent 7hrs walking around having a ball taking photos and seeing lots of great stuff. My hotel which was not far from the bus terminal was also not far from the center of town and the main plaza Praca da Matriz which is where I made my way to first.

There are several important historical buildings around the plaza Praca da Matriz - the impressive Cathedral Metropolitana, the theatre Theatro Sao Pedro and the Justice Palace. The plazas central monument features various characters, mainly politician Julio de Castilhos (1860-1903), unfortunately it was covered in ugly graffiti. There's also a couple of busts of Professor Andre Leao Puente and lawyer Oswaldo Vergara (1883-1973) plus a sculpture of a dog. There is 2 other palaces nearby - Palacio Farroupilha and Palacio Piratini. There are many 'tourist' signs around this area showing the direction of places and things to see in the city. I came now to a spectacular white church called Igreja Nossa Senhora das Dores built in the early 1800's. There are quite a few military personal in this area because of the military school. Also there is the military museum called Museu do Comando Militar do Sul. Nearby, the military school were doing an exercise in the park, from here I could see some graffiti art on the walls across the road - I went there next. I spent the next hour and 20mins exploring some interesting 'out of the way' streets discovering and photographing some fantastic street art! After lunch and a morning of sun and clouds, the afternoon became a little dark and grey. I saw various things including plazas Praca Gen. Daltro Filho, Praca Conde and Praca Julio de Castilhos, churches Igreja San Francisco and Paroquia Nossa Senhora da Conceicao, Park Independencia with its water feature and bright pink trees. Lastly I walked around the gardens of the navy/port buildings (Prefeitura de Porto Alegre) which was a great way to finish off the day. I also saw many great building facades while walking between these places.

I left Porto Alegre that evening on a bus north to Florianopolis which took 6hrs 15mins including a 30min food stop. I however returned for 2 more nights in Porto Alegre a couple of days later.

I Had an Accident, I Need a Hospital

I had had a little accident with an electronic gate in Florianopolis. My arm and camera was through the gate taking a photo when suddenly the security guards opened it and my arm went with it. I didn't realise until I arrived in Porto Alegre how bad it was. The next morning I went to hospital after a very painful night. My arm was not broken but was swollen, they put it into a cast and I spent the rest of that day in my hotel. I have never had travel or medical insurance on my travels in South America. The hospital bill was around $150USD, not too bad.

Next morning I decided I would walk around the city again looking for things I hadn't seen previously. This presented quite a challenge being only able to take photos with my large camera with one hand. The other problem I had which I was not expecting was when a man started following me. I was walking along the footpath and stopped to change camera settings. 3 meters behind me a man stopped too, I walked, he walked, I stopped again, he stopped. I told him to go ahead but he didn't move, so I changed sides of the road but he came too. My left arm was in a cast, my right holding my camera tight to my chest. I don't usually bring a knife with me but did today because of my arm, a Swiss Army Knife. While I had crossed the road I had brought it out and held it in my left hand. I didn't wave it about or threaten him, just so he could see it. He walked away while I darted up a side street in a different direction while looking behind me making sure he was not behind. I lost him. I realised then that I had suddenly become a huge and easy target for thieves - I was to find this out again 2 days later in Buenos Aires Argentina. However this was not enough to put me off my morning walkabout in the city.

First sight of the day glistening in the brief morning sun was church Igreja Sao Jose built in the early 1920's and of German origin. Passing plaza Praca Dom Feliciano and church Santuario de Nossa Senhora do Rosario and finding the attractive historical orange theatre Theatro Carlos Gomes near what you would call the town hall - Azorean's Palace built between 1898 and 1901, a cultural heritage building. If you could describe a plaza as spectacular, then this one in Porto Alegre would be it - Praca da Alfandega! It is so much more attractive than Praca Matriz up on the hill. Praca Alfandega is large and full or art, statues and monuments and is surrounded by fantastic historic buildings. Statues/busts include General Artigas from Uruguay, Arnaldo Ballve (radio), musician Leonardo Truda (1886-1942), poet Carlos Drummond de Andrade (1902-1987), writer Mario Quintana (1906-1994) and journalist Caldas Junior (1868-1913).

Porto Alegre proved to be a place worth exploring and I'm glad I did. I know there is a lot more to see and I hope to visit again in the future. Unfortunately my arm caused me to change my plans a little, instead of travelling down to Buenos Aires overland through western Uruguay I flew there via Sao Paulo, 1st leg 1hr 40mins, 2nd leg 3hrs.


View all photos in the Porto Alegre Photoset

Hotel America, Porto Alegre, Brazil (September 2013 - 3 nights) - This hotel is not far from the bus terminal and center of town. I stayed here before and after I visited Florianopolis. Well-priced, single bed room, shared bathroom and wifi. Breakfast is included also. On the corner nearby are some cheap buffet restaurants. Helpful staff. Recommended.
Brazil Travel Blog | Photos of Brazil | Festivals in Brazil | South America Videos 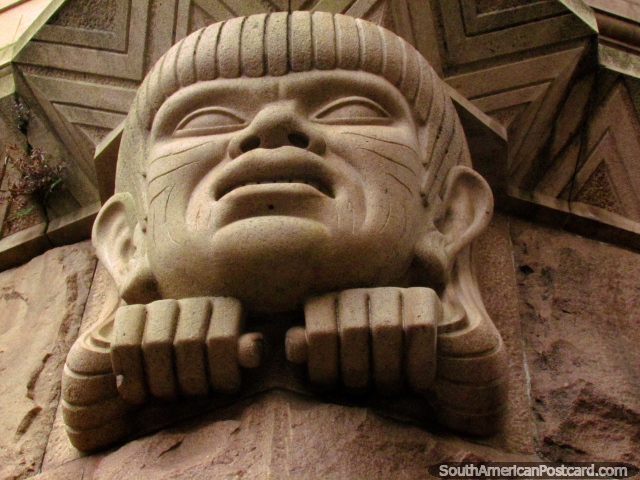