A man and his son outside their small wooden hut in the Amazon, south of Macapa.

A woman in a canoe on the river in front of her community in the Amazon, west of Belem.

A river junction and houses in Barcarena, west of Belem.

Cute little house with a tiled roof and lawns in the Amazon west of Belem, they are not all like this.
Map location: Belem to Macapa (Amazon River), Brazil

After enjoying several days in Belem, at the main port I bought a ferry ticket to Macapa in the north / west. Although there is an office at the port that sells tickets to Macapa, it was not open. Men sell the tickets from inside and outside the port terminal, but they do not wear any form of identification so I asked a woman at another ticket office if they were legitimate and she said yes they were. So I bought my ferry ticket for $130 Reals (about $40USD) and was told the journey would take around 23hrs. In the end it took 26hrs. We left at 11am and arrived at 1pm the following day. Meals cost $10 Reals (about $3USD) and there was a snack bar onboard as well.

On the day of departure I made my way to the main port at around 8am. After a few other people had arrived we were all taken in a free taxi to the old port where the ferry would be departing from. The name of the ferry was N/M Coronel Jose Julio with 2 hammock decks full of people.

The ferry headed west out of Belem with views of Amazon houses and huts along the river and the beauty of a million tall palm trees. Within an hour we passed by the town of Barcarena, the Bauxite (aluminium ore) capital of the world. Barcarena was once home of the Jesuits but was originally inhabited by the Arua Indians. The rest of the day I spent enjoying the view of, well you know, the Amazon! That is the best part about these ferry journeys from place to place in the Amazon - the free tour, but without the guide and souvenir shop.

Cute little churches, houses, huts and shacks, tugboats pushing barges, people traveling by motorized canoe and kids paddling small wooden canoes outside their houses are the most common sights on such a journey. Did I mention palm trees? That's right I did! It was great fun to watch a woman and her 2 daughters throwing plastic bags full of clothes to the locals in their canoes throughout the day as we passed by.

That night after a meal, people hung out in their hammocks or on the back part of the upper deck where the snack bar was. Sleeping in a hammock for me is never absolute bliss. I get a little here and there.

The morning started off a little cloudy. Breakfast was served - bread, butter, coffee and it was free. The woman and her daughters threw out more clothes and everybody started packing up their hammocks and bags. If you have never been to the Amazon you will love a ferry trip of this kind, just for the experience. This was my 3rd voyage of this kind on the Amazon River and I look forward to doing it again! EDIT: I did do it again in 2016 in Peru to Iquitos! We arrived in Macapa and I shared a taxi into the center of the city, a 30 minute drive.


View all photos in the Belem to Macapa (Amazon River) Photoset 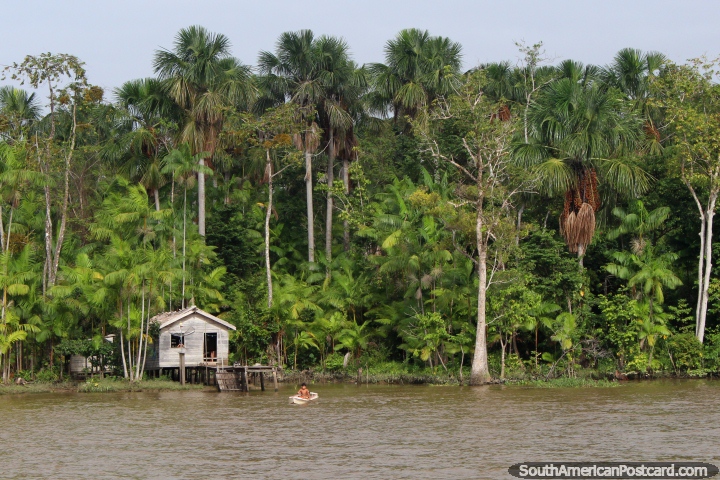