Traveling by small boat from Oiapoque to Saint Georges, The Brazil to French Guiana border cross.

A forest island on land outside of Cayenne in French Guiana.

The main square in Saint Georges in French Guiana.

I forgot to get my passport stamped in Oiapoque to exit Brazil before crossing the Oyapock River to Saint Georges in French Guiana. Luckily, there is an office a few streets back from the waterfront in Saint Georges where you can get exit and entry stamps for both Brazil and French Guiana! I thought I was going to have to go back across the river and come back over, but not. It's only a 10 minute boat ride between Brazil and French Guiana. The Oyapock River Bridge was still not open at this time, however as of March 2017 the bridge is now open!

Around the Main Square

Saint Georges is a small place with a few buildings surrounding the main square like the hotel / bar / restaurant where I sat down for a couple of cold ones. There is also a bank with an ATM machine. Saint Georges has a small but rundown (on the outside) church too.

Not Such a Great Welcome

I was enjoying walking around and taking a few photos until I started getting hassled by a group of around 6-8 youths. They were pointing their fingers up to their eyes to indicate that they were watching me and calling out to me and were being very intimidating. It was quite an uncomfortable situation and I went and had a talk to the police who were sitting at a restaurant just 20meters away. I told them about the group of youths hassling me and they asked if I had taken a photo of them, which I hadn't. I said that I had considered staying the night in Saint Georges but that I wouldn't be now because of this problem. The police suggested that I finish taking a few photos and then leave which is precisely what I did.

Along the waterfront is where the taxi-vans wait for passengers to go to the capital Cayenne. It takes 2hrs 45mins at a speed of around 110kmph and costs $30Euros. The Lonely Planet said this journey takes 2hrs but I can't see how that would be possible unless the driver drives like a lunatic (the road is winding in parts). From Saint Georges the distances are to Regina 80kms, Matoury 179kms and Cayenne 190kms.

Between Saint Georges and Cayenne the countryside is beautiful and green and also clean without the rubbish you usually see beside the roads in South America. We dropped off a passenger in Regina. From here it is 67kms to Cacao - an Hmong community from Laos. They have a Sunday market which sells crafts and Laotian food. We passed through a community called Commune de Montsinery Tonnegrande where there is a sign that points to a nearby waterfall called Cascadas Beausejour. During the journey we crossed on bridges over a couple of wide rivers and passed a car cemetery. The road is in good condition and the trees are tall. It's nice and green countryside, enjoy the ride! 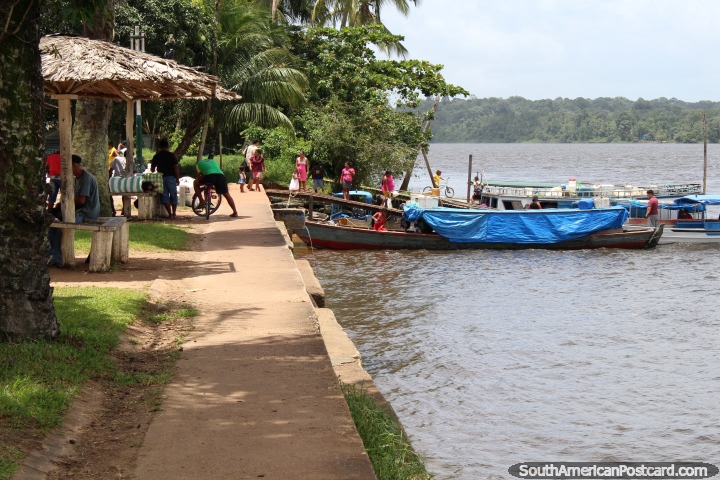