Palm trees above the beach, view out to the ocean at Ponta Negra, Natal.

So peaceful at the beach in Ponta Negra, a beautiful view through a tree to the sea, Natal.

Dominated by the powerfully spectacular sand dune known as Morro do Careca or in English 'Bald Hill'! Ponta Negra beach 14km south of central city Natal is the best and most popular location for a stay in Natal. Ponta Negra is the 4th beach I stayed at on my travels up the coast of Brazil between Salvador and Natal, they being Maceio, Maragogi and my favourite Pipa! I had just come from Pipa Beach which is less than 1 hour south.

Ponta Negra has many options for accommodation along the main road and also in the streets up the hill. The pousada I stayed at was $25USD and just one street back from the main road. Being up the hill it offered awesome views from the balcony where they serve a great breakfast. Pousadas in Brazil always include a full buffet style breakfast which I love!

Ponta Negra beach is long, wide and open! The bald patch of Morro do Careca dwarfs the buildings and people below it. It is however, forbidden for any kind of activities at this time, even walking up to the top and sliding down, no go! This is in the name of preservation and protection of this iconic local landmark. Brazil's beaches always have food and always have seats, tables and umbrellas. They are kept clean and free of litter too! Barracas are tents set up where they serve all kinds of food, it's big business! Other options include the carts with names like 'Hula Hula' that sell Milho Verde (green corn), meat on a skewer, salty crepes and sweet crepes. You can get a Pina Colada or coconut juice to go with that if you like! On the main street there is cuisine in fusion at Mestre dos Mares Restaurant - Japan, Mexican, Thai. The menu and photos are enticing!

80% of the 14kms between Ponta Negra and central Natal is Natal Dunes State Park. The park is about 1km wide and sits at the back of the coastal highway. The park has treks around the sand dunes with specialist guides, there are 3 treks available for beginners, intermediate and extreme. The park also has large areas of native vegetation with flora, fauna, animals, birds, walking trails and many species of trees. Some of the tour offices in Ponta Negra take people to the dunes for buggy rides. The park holds many more activities like workshops, exhibitions, concerts and entertainment for children! You can take a canopy ride across the artificial lake or slide down a plastic sheet into it if you prefer! Natal Dunes State Park is a place of great education, exploration and fun!

Before leaving Natal I had a look around the historic center after leaving Ponta Negra by taxi. As I left the taxi with my backpacks the rain came down in buckets! When I got the chance I walked around and saw some of the main historic buildings and churches. Firstly an old white church with delicate blue trimmings - Igreja do Galo (Santo Antonio). Nearby a memorial of Luis da Camara Cascudo (1898-1986) standing on a large hand - Memorial Camara Cascudo. He was born in Natal and was involved in culture and music among many other talents. Next, the yellow and white church with a small clock on the belltower - Igreja Nuestra Senora da Apresentacao (1862). The striking pink building with palm trees and silver gates, this is the Cultural Palace (Palacio da Cultura, 1868). It has a couple of worn stone sculptures in the gardens of an indigenous woman and a horses head. The palace is used for music, theatre, art and performances! The eye-catching city hall - Prefeitura Municipal do Natal. It's also a palace and is named after Antonio Filipe Camarao (1580-1648), an indigenous Brazilian born in Natal who fought against the Dutch. The green and white church with a red-tiled roof - Igreja do Rosario. All 3 of these aforementioned churches have a very similar design: 1 tower and the same crown shape at the front under the cross. Finally the yellow Solar Bela Vista building with a single palm tree on each side which is the center for culture and recreation. It looks like a church from the outside.

From Natal I flew to Sao Luis but not directly, in order to get a decent price I had to fly via Brasilia in the south. I'm sure on a different day a direct flight would be cheaper! I plan to visit this part of Brazil again in the future to see more along this stretch of coast around Natal!


View all photos in the Ponta Negra Beach / Natal Photoset

Pousada MaraVista, Ponta Negra - Natal, Brazil (March 2017 - 1 night) - Nice pousada with views of the coast and beach! $80 Reals, half the price of the place next door! Nice balcony to enjoy relaxing, eating and the rooms are very comfortable and have a fridge! Just a minutes walk to the beach, main strip and restaurants. Recommended.
Brazil Travel Blog | Photos of Brazil | Festivals in Brazil | South America Videos 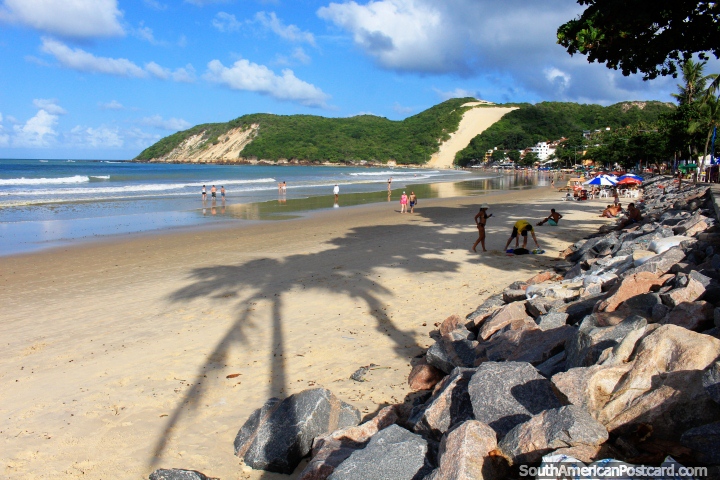