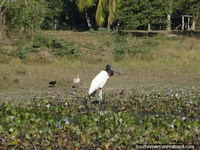 A large white Jabiru Stork and other birds in the Pantanal. 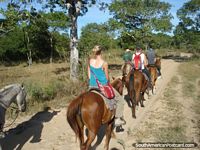 Group horse riding in the Pantanal. 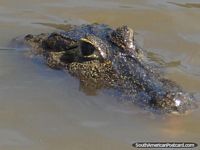 Caiman lurking in the river, Pantanal. 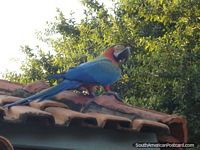 The 90 minute bus journey to the entance of the Pantanal park from Corumba saw us pass mountains, trees and a lot of greenery. I was getting a real sense of being in the jungle and started to see a few animals like a jabiru stork and its huge nest in a tree beside the road. 30 minutes after the bus passed on the bridge over the Rio Paraguai river and past a park monument, we arrived at the entrance Estrada Parque Pantanal Sul where we waited for the jeep to take us to the lodge that we would be staying at called Santa Clara Farm.

While I waited I took a few random photos of a sign, mangos, a crate and a flower. Soon we were on our way with a few other people who were going on a tour and making the journey over the river on a dirt road over many little wooden bridges for Santa Clara. It took nearly an hour but we did stop at another lodge on the way called Passo do Lontra. There is a little grocery store there to pick up any last minute supplies and a tall water tower. There was a few birds and animals to see along the way, a stork, some caiman, a Raptor eagle, a tucan, a monkey, cows, vultures, a pair of blue Hyacinth macaw and a pair of parakeets. There are water holes under many of the 20+ bridges along this journey with animals sitting around under them. Animals also cross the road too, so it's important for the driver and any keen photographers to keep their eyes open.

A nice blue dual wheel gate makes the entrance into Santa Clara with the outside hammock room in the distance. There was a colorful bird in a tree. I met the people at the lodge and was shown to my dorm which I would share with 2 others. Then I was given a tour of the lodge. It was the end of the day and time to settle in and wait for the evenings dinner to be served in the dining room in a buffet style. I had some friends here that I had met on the Death Train from Bolivia to Corumba. The food was pretty good and you could help yourself to a second serving. There was a great bunch of people staying here and it was a very social night enjoying the hot climate and nice setting. A fox came to visit the camp to find food and thousands of little bugs were attracted to the bright outside light and sometimes us.

Up early next morning and outside where it was amazing how many birds there were around the farm, hundreds of green and white parakeets and a few pet macaw and a whole bunch of wild Hyacinth macaw. There was a pair of jabiru storks in the pond as well as a spoonbill. There are 3 little pet pigs who love to visit the bedrooms and rummage around, keep your doors closed. One of the guests slept in a hammock outside to really experience that jungle feeling during the whole time that he stayed! The mornings activity would be piranha fishing, our group of 6 and guide Carlos went down to the river by truck to the boat. While we travelled downstream we saw a large alligator on the bank and many caiman. There were some birds and a jabiru stork in a tree (the worlds largest stork). At the fishing spot on the bank of the river that our guide had chosen, we baited our hooks and stood on the grass or in the water and cast out our fishing rods. We were told that unless your legs are bleeding it is ok to stand in the water, the piranha only go for blood. It was a lot of fun and everyone had a great time and most people caught a piranha or 2. Carlos our guide was a super pro at catching them. The mosquitos were a bit vicious on the river banks, so it's important to have some repellant. There was a caiman hanging around in the water where we were fishing and he got hooked a couple of times but he was freed without too much problem. For about an hour we fished and caught or nearly caught quite a few piranha. Carlos gutted them and threw it into the water. Within seconds the floating meat and remains were devoured by piranha, the rest of it and any left-over bait was thrown to the vultures. Later on for lunch we would get to eat our catch!

It was time to head back to the farm for some recreation, lunch and to get ready for the afternoon jungle walk and truck safari. On the way back in the boat along the river we saw a mother and baby capybara on the river bank, plus a heron, a Crested Caracara, macaws, a yellow Billed Cardinal and a Savannah Hawk. A little while later it was time for lunch. It was served as usual buffet style and we also had 7 piranha cooked and ready to be eaten. It tastes really good, a bit like trout. Until it was time for the afternoon jungle walk and truck safari, people swam in the pool, sunbathed, lay in hammocks or had a siesta. In the mid afternoon a group of about 9 plus 2 guides and our driver headed along the dirt road across many little wooden bridges for at least 30 minutes to an area to go walking. Along the way we stopped several times to view wildlife such as birds, storks, caiman, cows and capybara in waterholes, a big family of capybara eating grass, a stork that had caught a fish, horses and 100's of jabiru storks. We dismounted the jungle truck and began trekking through the landscapes of the Pantanal - across fields, through bush and jungle and around muddy swamps for about 2hrs. Mosquito repellant and a bottle of water are valuable items here. A white long sleeve shirt is recommended to repel mosquitos, black attracts them. We saw a monkey above us in a tree and an interesting type of tree that wraps itself around another tree and basically sucks the life out of it and ends up replacing it. The waterhole area and swamp had a mixture of birds, storks and perhaps a few hundred caiman soaking in the cool mud and lily leaves, there were caiman everywhere!

We headed from here across some fields, over some fences and into the soon to be sunset towards the truck which had moved to where we would exit. By now it was dark and we drove back towards Santa Clara stopping a few times to see any nocturnal animals along the way. There were groups of capybara crossing the dirt road, a caiman with a group of tiny babies also crossing that we had to stop for and a large spider on a fence post. Bring a scarfe or something to cover your face for the ride back because the flying bugs blow through the outside cab of the truck and get in your eyes and mouth. Wear sunglasses too. Once back, cold showers were in demand and dinner was served and the evening was spent chilling out with a drink.

Horse riding was to be the morning activity after breakfast. A group of about 5 of us plus 2 guides set off for a casual ride around and out of the farm area for about an hour and a half. The horse ride was not so much about wildlife viewing but more about just enjoying the area and atmosphere. We did however come across an armadillo in a bush but it disappeared very quickly. I also saw a blue macaw.

The rest of the day was spent walking around the farm, swimming, sunbathing and packing up. After lunch we would be leaving and heading down the dirt road to the entrance of the park and catching a 4hr bus bound for Campo Grande. On the way to Campo Grande a massive flock of White Eyed Parakeets flew overhead and the driver stopped the bus so that everyone could see them. My experience in the Pantanal and at Santa Clara farm was a good one. I would recommend a few days in this special wildlife reserve to anyone, there are various lodges and tour operators that offer a programme of activities and experiences, enjoy!


View all photos in the Pantanal (Wildlife & Wetlands) Photoset 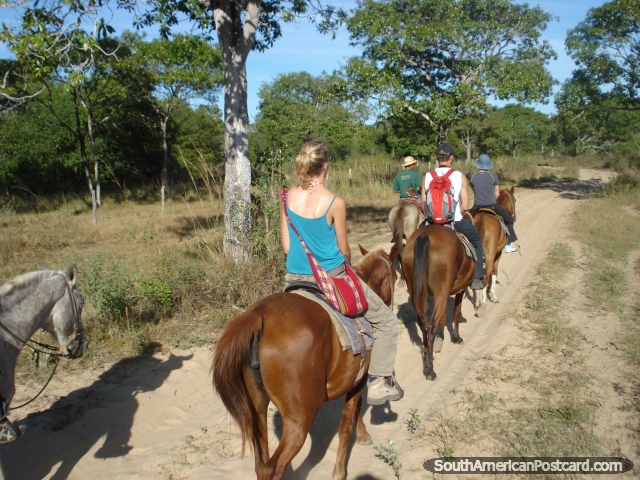