Blue, yellow and green houses side by side in the sun in Joao Pessoa.

Did you know that Joao Pessoa directly translates to English to be John Person? Interesting. It was renamed in 1930 after former governor Joao Pessoa Cavalcanti de Albuquerque, previously Joao Pessoa was called Parahyba. The city has well-maintained historical buildings and a large lagoon and park in the center. I made a stop in Joao Pessoa for the day and night to break up the journey from Recife and Olinda on my way north to Pipa Beach (Praia da Pipa). 2hrs 15mins by bus from Recife to Joao Pessoa. A convenient hotel outside the Rodoviaria bus terminal was a good place to stay so as to make an early getaway the next morning.

The historical center and lagoon are all within 1km from here. Up the hill a little towards the center, the first significant building I came to was the huge white postal building (Correios, Telegraphos) with its tall triplet palm trees outside. 80 meters away is the theatre called Theatro Santa Roza painted pink. The cathedral Basilica de Nossa Senhora das Neves (Basilica of Our Lady of the Snows) can be seen up the hill slightly as can the Sao Bento Monastery. This is the center of the historical area. The long pink building nearby with all the arched windows is the Faculty of Medical Sciences, all the buildings are in perfect condition. The Blue Tile Room called Casarao dos Azulejos I believe will be renovated soon, the blue tiles were brought from Portugal in the 19th century. Opposite the Blue Tile Room is Bispo Palace - a beautiful yellow building with blue window shutters and white columns. Beside the palace is the Church of Santa Teresa of Jesus and the Church Of Our Lady of Mount Carmel (Carmo). Nearby is the church Igreja Sao Francisco which is quite spectacular, it was built by Franciscan friars in 1589 and was used as a fort by Dutch invadors in 1634.

Walking to Lagoon Park (Lagoa Park) takes 10mins from the historical center. Lagoa Park is a beautiful public space with lots of grass and tall palm trees all around! There are eateries and activities for children, while at the same time being a very peaceful place for adults. There's an awesome ceramic work monument at the park called 'A Pedra do Reino' for which I have some detailed photos.

A Good Place for a Stopover

In Joao Pessoa the climate is tropical, the beaches are 7kms from the center and there's several museums and cultural centers too. It was a pretty good place for a stopover in retrospect, I'm sure I'll pass through again! From Joao Pessoa north to Praia da Pipa (Pipa Beach), firstly you need to go to Goianinha (90mins), then from there a bus to Pipa takes 30-40mins. Happy traveling!


View all photos in the Joao Pessoa Photoset

Hotel Ouro Preto, Joao Pessoa, Brazil (March 2017 - 1 night) - Located beside the bus terminal so it's handy to have a look around the center and make a fast getaway! $65 Reals for a simple room that was a little musty but adequate for a night. The owners were friendly and helpful and the morning breakfast was good. A place to break the journey between Olinda and Pipa.
Brazil Travel Blog | Photos of Brazil | Festivals in Brazil | South America Videos 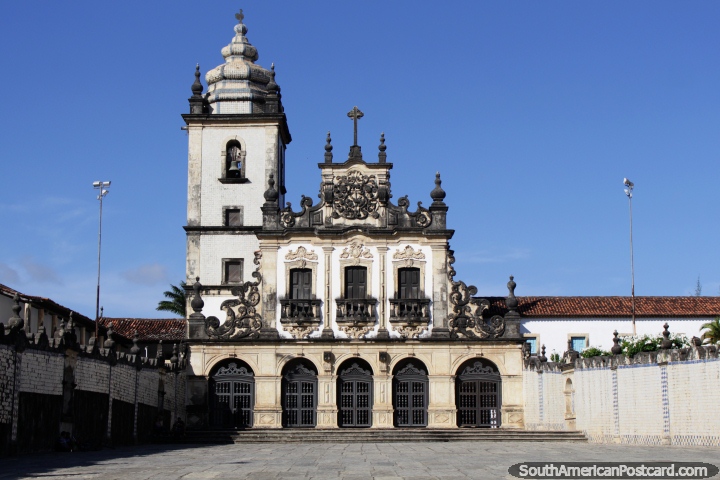