Rio Grande, Brazil - A Port Town With A Few Points Of Interest 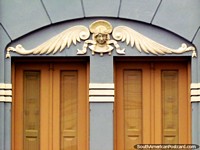 Peoples faces on building facades is a common site, city of Rio Grande. 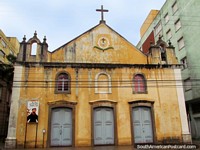 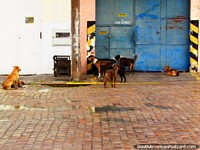 A group of dogs near the port in Rio Grande. 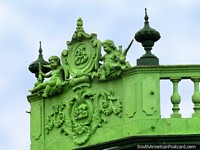 The reason I decided to visit Rio Grande for a night was because it is roughly halfway between Chuy on the Uruguayan border and Porto Alegre a few hours more north. Basically to get a nights sleep and while I was there - to have a look around. From Chuy across the border to La Victoria took 25mins and from there it took 4hrs 40mins by bus up to Rio Grande. I found a budget hotel across the road from the bus terminal, the only hotel I could see. Rio Grande is an old city and port founded in 1737. Before it was a city it was originally a fort built by the Portuguese to defend against the Spanish. I was unlucky with the weather but was determined to walk around between downpours and see what I could find worth photographing.

My idea was just to walk from my hotel towards the general center of town and see whatever I saw along the way. I actually had prepared a map from the internet before I arrived so I had an idea of the streets, parks and various other things. One of the main plazas in Rio Grande is Plaza Tamandare. While I walked there I passed Plaza Buenos Aires and a few buildings with interesting historical facades plus 2 or 3 churches, one called Igreja do Salvador. Plaza Tamandare is a large plaza, more a park really with a bridge over a pond, ducks, geese and various statues and monuments. The plaza is named after Almirante Marques de Tamandare (1807-1897), an admiral in the navy. In the middle of the pond stands a statue of Jesus and around the plaza you will find canon and other bits and pieces. I waited 40mins for a heavy downpour to stop before I made my way towards the other more prestigious main plaza called Plaza Xavier Ferreira. This plaza is named in honour of Francisco Xavier Ferreira (1771-1838), a journalist and politician who founded the cities first newspaper. The foundation monument has a statue of Brigadier Jose da Silver Paes (1679-1760), a soldier and engineer who founded the city and built the original fort - Jesus Maria e Jose. There is also a huge water feature in the shape of a large pool, it has a couple of figures in the middle - 2 boys, one in yellow and green clothes with a slingshot. There also is a statue of former president Getulio Vargas (1882-1954), a large fountain, the Fraternity monument, the Duque de Caxias monument and the Mae Tres Vezes Santa monument. Around Plaza Xavier Ferreira are a few historical buildings including Colegio Arte Sacra and the Ministry of Farming and Agriculture. This area is close to the port which is where I went next.

The streets and buildings around the port are a bit more derelict, not exactly a place for tourists. But since I don't consider myself a tourist that was fine with me - I like to see as much as possible. There are plenty of old buildings here (most not in great shape), interesting facades and architecture and cobblestone roads. One street back from the port I saw church La Nuestra Senora Monte Carmelo, the theatre and cinema Cine Theatro Carlos Gomes and church Loja Maconica Uniao Constante. The weather and light were starting to get very bad. I wandered around a few streets and found Plaza 7 de September with its statue of Dr. Carlos Santos and church Igreja Nossa Senhora da Conceicao on the roadside opposite. Finally before packing it in for the day I sheltered from the rain at Plaza de Bonfim.

Not a Tourist Center

I had reached the point of diminishing returns (walking around the streets, not knowing where I was, seeing very little). I had done what I came there to do and now tried to find my way back to my hotel. I didn't find the people in this city very friendly or helpful to be honest. I asked several people during the day for directions, most people were so paranoid about something that they didn't even speak to me. The woman in the pharmacy listened to my question, said nothing then continued her conversation with somebody else. The family I asked for directions just kept walking past. The woman I asked in the street, said nothing and kept walking. The line of 10 people in the shop stood there and stared at me like I was some kind of freak when I asked them where I could find an internet cafe. Obviously Rio Grande is not tourist central in Brazil, these people were probably wondering what the hell I was doing there, a couple of times I was wondering why I was there too. Anyway I was there, I saw what I saw, I don't ever need to return, I can't recommend it to anyone, it was just a place to sleep the night. From the bus terminal the bus north to Porto Alegre took 4hrs 40mins.


View all photos in the Rio Grande Photoset

Hospedaria Recanto, Rio Grande, Brazil (September 2013 - 1 night) - Well, you get what you pay for I guess. Fairly cheap by Brazilian standards. Across the road from the bus terminal. The room was tiny and had a horrible bed, one where you can feel the wooden slates pressing through the thin mattress. Surprising but I had a great nights sleep! Shared bathrooms. Take it leave it.
Brazil Travel Blog | Photos of Brazil | Festivals in Brazil | South America Videos 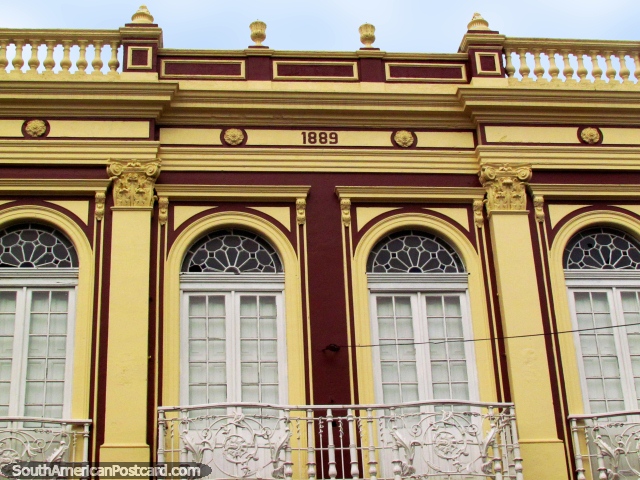