Santo Antonio de Cameta, a ferry on the Parauau River north of Breves.

House and jetty on the Parauau River, a river off of the Amazon River, north of Breves.

Taxi shelter at the end of a jetty and huts in the Amazon, north of Breves.

An old and weathered wooden hut in the Amazon beside the river, north of Breves.
Map location: Santarem to Belem (Amazon River), Brazil

My 2nd time in the Brazilian Amazon started in Santarem and after enjoying the city and surroundings I wanted to head east to Belem. At the Santarem Port I payed $130 Reals (about $40USD) for a ferry ticket. It was to be a 48hr journey with 2 nights sleeping on the crowded but fun hammock deck.

We left Santarem at 11.30am and in the end it only took 43hrs and we arrived at around 6am a couple of mornings later. We spent about 90mins in total stopped at ports dropping off goods and collecting more people. Meals onboard cost $10 Reals (about $3USD) per meal, the food was good and consisted of meat or chicken, rice, noodles and salad. Of course the best part about this trip is that you get a tour of the Amazon by default and for no extra cost, a tour that is just amazing! I had a good idea of what to expect after the 6 days / nights trip I did by river from Manaus to Tabatinga 4yrs earlier.

Half an hour after leaving Santarem we crossed from the black to the white waters. The black river is the Tapajos River and the white (actually brown) river is the Amazon River. By late afternoon we made a port stop at Monte Alegre, it's around 80kms north-east of Santarem and is quite a major town in the Amazon. Monte Alegre has a lot of beautiful and interesting scenery around it, look out for birdlife.

After the sunset, dinner and hanging out on the top deck and sleeping I woke up the next morning and saw that everything around us had changed. During the night we had turned off the Amazon River onto a southward river that was much narrower. Now you could see the communities, houses and people, they were right there! It was really interesting seeing Amazon schools and small Amazon churches with kids and families outside watching the ferry go by. Many Amazon folk canoe out to the ferry, some play games with the ferry. 2 boys deliberately crashed into us in order to capsize their canoe and get thrown into the water.

The communities have cute little churches and schools where the kids around the neighborhood arrive by boat or canoe. The houses tend to range from huts and shacks up to basic and simple. Many have satellite dishes and a jetty / walkway out to above the river with a ladder to get down to a canoe or boat. All the houses are dwarfed by the endless tall green palm trees and other huge trees. Other sights include boat-building yards, jungle soccer field clearings and timber felling.

By late morning the grey clouds had disappeared and the sun was out. We were on the Parauau River north of a town called Breves and were heading southward in the direction of the Furo Santa Maria, this is the large waterway west of Belem. By early afternoon a downpour began which was quite fun to watch from the sheltered ferry. By mid-afternoon we made a stop in Breves, a large Amazon town. There are a few historic buildings to see here which you can from the ferry. The big green building is the prefecture, there is the blue and white church and there's a big statue / monument in front of the plaza beside the water. By the time we continued after Breves the day was dark and night was looming. After the last night onboard we arrived in Belem first thing in the morning. I enjoyed the trip a lot. 2 nights was perfect, the 6 nights 4yrs earlier was quite long.


View all photos in the Santarem to Belem (Amazon River) Photoset 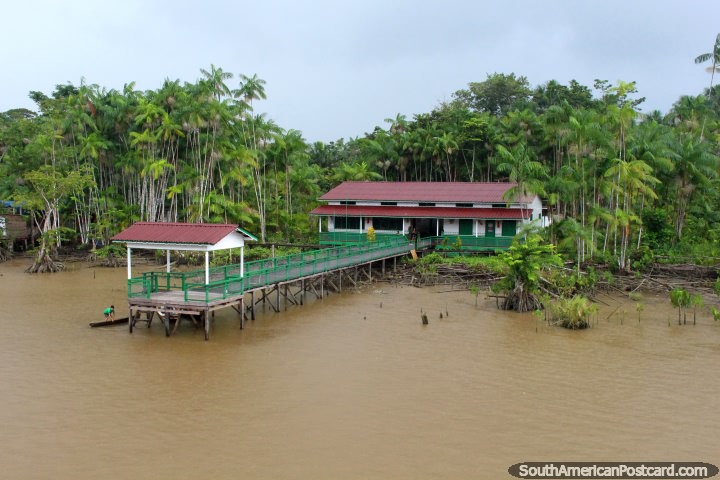