I entered Brazil from Uruguay in the very south into the dual border city of Santana do Livramento and Rivera but there was no border control and I didn't know I was supposed to find them myself, so I didn't get a stamp in my passport. I spent the night in Livramento in a cheap hotel.

The next day I travelled by bus through the southern plains, past ranches, cattle, waterholes and wide open spaces to the small city of Uriguiana where I stayed for 1 night. I wandered around the streets here for a while, the people were asking me if I was American, about 6 times in 2hrs. I'm not so I replied 'no Americano'. I asked a taxi where I could find a restaurant to get something to eat and drink. He drove me to a place out in nowhereland that didn't really have any food to eat because it was just closing. So I asked him to take me back into town and told him to drop me off at a fast food stand and then he charged me $10USD for the taxi fare. I walked back to my hotel at about midnight, a policeman rode beside me on his bicycle the whole way. There must have been some danger I was unaware of I guess.

After staying up most of the night reading and planning for my travels in my hotel room suddenly at 5am I decided that I had to get over the border to Paso de los Libres in Argentina. So I called a taxi, paid the hotel bill and asked the taxi to find me a money machine for my Visa card. We tried at least 3 ATM's but none would give me cash. Apparently only HSBC banks will work here. So I told the taxi to just take me to the border which was about 10 minutes away. Unfortunately I couldn't pay the taxi much because I had no cash except for a bit of change in Brazilian and other currencies, so I gave him that.

That was not the last of my problems on this morning. Next, because I had walked into Brazil without getting a passport stamp, I had hassles leaving the country. The customs wanted to know how I got into Brazil. I couldn't speak Spanish, so I brought out my map and showed them where I crossed the border and told them there were no border police. They were not that impressed, but stamped my passport and waved me through. But then the Argentinian border control wanted to know how I got into Brazil also, so I had to bring out my map again and show them. I don't think they were terribly impressed either, but let me through. I was back in Argentina, in Paso de los Libres on my way to Posadas to get to Iguazu Falls. 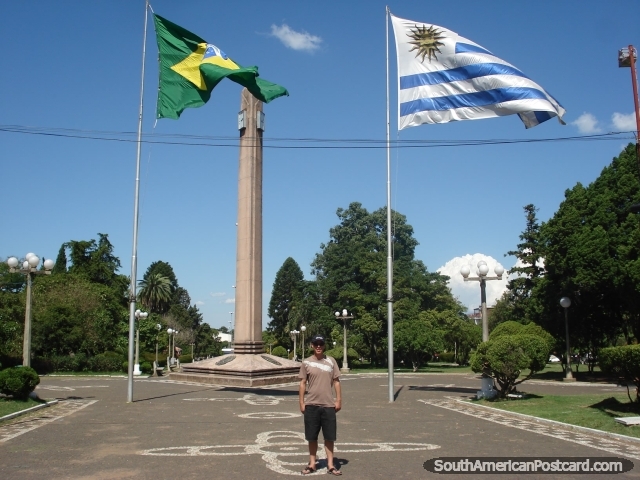