Lunch stop at Hotel Fazenda in Tartarugalzinho, between Macapa and Oiapoque.

Palm trees and grasslands in the north between Tartarugalzinho and Oiapoque.

Family on the porch of their house in the far north/east, south of Oiapoque.

The road from Macapa to Oiapoque is about as remote as it gets! It is the most northern road on the east coast of Brazil and it's good for one thing only - getting to and from French Guiana. There used to be flights between these 2 places but no more.

There are 2 options for this trip, 8-9hrs in a car or around 12hrs in a bus. It's not particularly scenic or beautiful countryside either, it's nowhere land, 590kms worth.

How to Take a Car

In Macapa a taxi took me to the Rodoviario Terminal where the cars leave from. I payed the gringo rate of $150 Reals ($47USD) for this trip. I know this because I saw the other 3 people pay only $130 Reals each. I was the first person in my car and therefore had to endure the boredom of being drivin around unattractive Macapa picking up the other people. This still didn't guarantee me the front seat of course. Magically one of the other people (a mate of the driver) had already secured that. OK, so I was in the back with the other 2 people, not so bad, at least I wasn't in the back with 3 or 4 other people, that's something!

Finally we left Macapa, the first sign I saw said Porto Grande 82kms, Ferreira Gomes 113kms, Tartarugalzinho 224kms and Oiapoque 600kms. After 90mins we crossed over the river Rio Araguari around Ferreira Gomes. There is a blue and white statue of the Nossa Senhora Imaculada Conceicao and a dam around here. Another 90mins later we made a stop in Tartarugalzinho at a lunch house called Hotel Fazenda. The food was good but within a couple of hours the road had become unsealed and it was now a slow and rough ride and I was not feeling very well. The road had been great up until this point.

Let Me Out, I Feel Sick

5hrs into the trip I asked the driver to let me out at the next eatery and continue on without me. I needed to lay down for a while and have some more food and water. The restaurant was called Cassipore. I estimate that it is about halfway between Tartarugalzinho and Oiapoque. This stop was a good idea in terms of having a break from the rough road but was not so much of a good idea as far as continuing my trip to Oiapoque. In fact after about 2hrs I was feeling better and was ready to leave. The problem was that the occasional cars and vehicles that did come past were not stopping to pick me up when I waved them down from the roadside.

I Hitched a Ride

In the end, after 5hrs stopped at this restaurant in the middle of nowhere I managed to get a ride with a nice family after waving them down and offering them some $USD for their trust and helpfulness. They didn't like the look of the other stranded man who was also trying to get a lift, so he didn't get one. I was very lucky and even voluntarily showed them my passport so that they would feel better about trusting me. It was now night and the rest of the journey took 3hrs with only the last 30mins being on a sealed road.

I Arrived in Oiapoque!

I arrived in Oiapoque in the middle of the night, found a cheap but good bed for the night and crashed. I was glad to be there and not still back where I was, you know? If I hadn't got a lift I believe a bus would have eventually come through maybe around 11-12pm. I think the buses leave Macapa around 5-6pm. I would recommend to do this journey on a full stomach and to not get out of the vehicle for a break! In the end it was 5hrs + another 3hrs = 8hrs to travel 590kms by car from Macapa to Oiapoque.


View all photos in the Macapa to Oiapoque Photoset 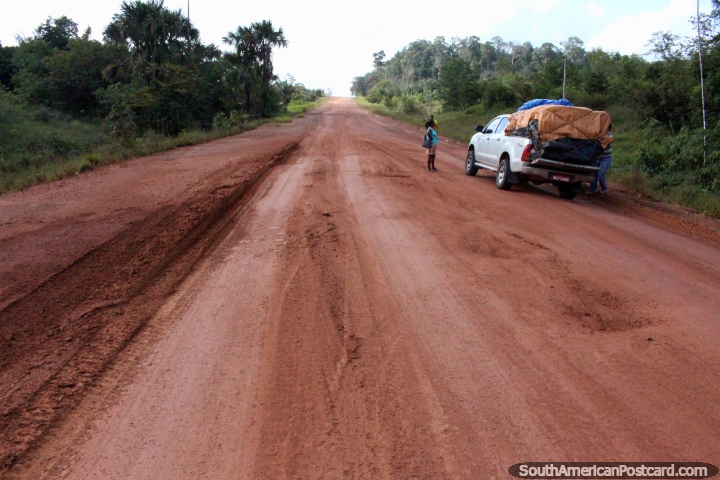