Evangelico Temple (1947) in Recife, with a Gothic steeple.

Stacked drums, a monument at Zero Mark in Recife.

An historical center surrounded by water with old stone churches popping out by the dozen and bridges with picturesque views of the city all around! Recife reminds me of some of the Dutch colonies I have been to in the way the buildings all stand side-by-side in front of the water. The Dutch in fact were the original colonizers of Recife back in the 1600's. I arrived in Recife from Maragogi Beach, 3hrs 30mins south and I was keen to get out into the streets and do some exploring.

One of the first things I stumbled upon was a sculpture from the Poets Circuit (Circuito da Poesia) which consists of 17 bronze sculptures of famous and beloved Brazilian poets. These sculptures are scattered around the city and each location is marked on a map. 2 men selling fruit and veg on the street were both keen for photos while I was around Maciel Pinheiro Square opposite Igreja Santissimo Sacramento church - pineapples, mangos, apples, kumara and yuca. These streets around the center have a certain grittiness and a well-worn feel.

I headed to 6th of March Bridge (Ponte 6 de Marco) also known as Old Bridge. The bridges across the waterways are what makes Recife come alive, suddenly the city streets and buildings are no-more and there's open space and wide views! On the other side I came to what used to be the House of Detention (1850) which held 200 prisoners, in 1973 it was remodeled and turned into a craftwork shopping and cultural center - Casa da Cultura. Around this area are more grand churches and some monuments.

To the next bridge - Mauricio de Nassau Bridge! This bridge is located where the very first bridge in Latin America was built by the Dutch in 1643, it was reconstructed in 1917. Carnival decorations still stood along the bridge. It's quite picturesque around here with views of palm trees along the waterway banks with old buildings blending in like a jungle scene. From these angles Recife actually looks like it's growing out of the jungle! There are some spectacular historic buildings around Plaza Republica (Praca da Republica). You will see the government palace (Palacio do Campo das Princesas), the Santa Isabel Theater (Teatro de Santa Isabel) and the Justice Palace (Palacio da Justica). This is a heavily green area with lots and lots of trees, nice!

Crossing the Santa Isabel Bridge I suddenly thought I was in Jerusalem when I saw the big gold dome on the other side, it's actually the Pernambuco Legislative Palace! Directly to the right of this is a handsome red building housing the Natural History Museum Louis Jacques Brunet, a little further on is the huge and impressive Reitor Joaquim Amazonas University.

Heading now to quite a prestigious part of the city, Marco Zero / Praca Barao do Rio Branco - a public space for events. There's 3 tall skinny buildings with domes around the plaza, one is a cultural center. Nice views of the water and the Francisco Brennand Sculpture Park.

Around Rua Bom Jesus (street) are attractive cobblestone streets to wander around with colorful houses, shops and interesting things. It is here I found the Museum of Gigantic Bonecos of Olinda! Bonecos are the huge puppet characters they have at the Brazilian carnivals! Inside you will see many famous Brazilian's including soccer stars, but also we have The Beatles, Mick 'n' Keef, Jimi Hendrix, Gene Simmons, James Brown, Ziggy Stardust and even Batman! A fantastic place for some fun photos!

Nearby is the historical Kahal Zur Israel Synagogue and 2 theaters - Teatro Apolo and Teatro Hermilo Borba Filho. An interesting bar / cafe called Teatro Mamulengo was a surprise, it has interesting dolls, masks and other little characters on display, it's quite a show!

I enjoyed Recife, the city has plenty to see, great history and is known to have a spirited culture of music and entertainment! Some restoration of the many church facades would shake-off some of the grit, the waterways and bridges are really beautiful! Of course if the city ain't for you, there's always the beach, but watch out for sharks! By taxi to Olinda is where I went next, 20mins.


View all photos in the Recife Photoset

Hotel Central, Recife, Brazil (March 2017 - 1 night) - Kind of old and in need of some sprucing up but has character! $84 Reals for a single bed room without bathroom, itchy bed, room had a basin though, came in handy in the middle of the night... In the center of course and near the large mall where you can get a lot of food to eat and use the ATM machines too. The buffet breakfast included in the morning was pretty good. Not great but not bad for a backpacker!
Brazil Travel Blog | Photos of Brazil | Festivals in Brazil | South America Videos 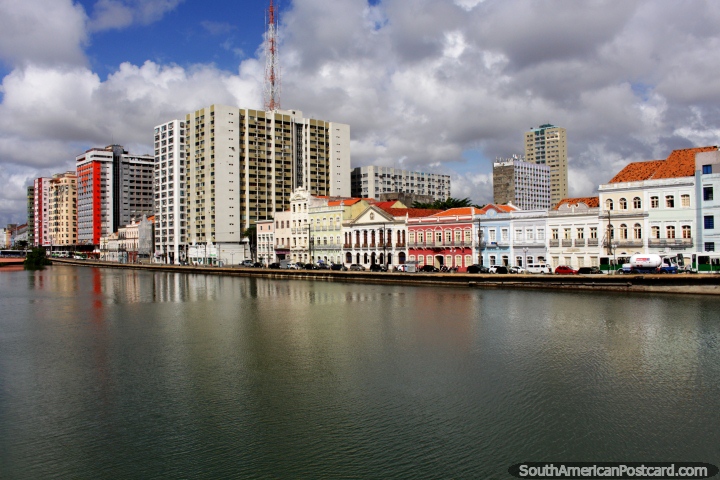