The Acre River in Rio Branco runs through the city, come down and enjoy the view.

Image of a woman, street art painted inside a car park in Rio Branco.

Rio Branco in Brazil is located 3hrs by car north-east from Cobija / Brasileia on the northern border of Bolivia. Rio Branco is not exactly tourist central but there are a few things to see and do here if you so happen to be passing through this part of the Amazon Basin. Although I spent 5 nights in Rio Branco, you can see everything worth seeing in the city in a day or 2. I had spent the previous days before arriving in Rio Branco in nearby Puerto Maldonado in Peru. With the Acre River flowing through the city, the most central area in Rio Branco is beside the water and around.

Beside the Acre River around Bandeira Plaza are some important sights in Rio Branco. The Mercado Velho (Old Market), the yellow building built in 1929. Outside the front of the building are 3 bronze figures. Inside Mercado Velho are restaurants with nice buffet food to enjoy, you pay by weight. Beside the Old Market is a row of small colorful buildings being shops and bars. In the evening tables are set out in front with views of the river where you can enjoy a cold beer to cool yourself down from the Amazon heat. The pedestrian bridge across the Acre River (Passarela Joaquim Macedo) is in front of the Old Market and will take you across to the other side where there are some very fine commissioned wall murals. 2 blocks up the hill from Bandeira Plaza is the UNESCO listed Government Palace (1549) with red stairs leading up to the front. At the back of Rio Branco Palace is a large pond with nice trees around. Up from the palace is the Memorial Dos Autonomistas where during my visit was an exhibition of various works of art. The cathedral with red roof and tall tower can be seen from several points around the city. 2 blocks from the main square (Praca Placido de Castro) is the Rubber Museum (Museu da Borracha) which shows the process of rubber production and its history in the region, entrance is free. The Chico Mendes Ambient Park (1996) is named after assassinated Brazilian rubber tapper and environmentalist Chico Mendes (1944-1988). The park has a few animals to see including turtles, snakes, birds such as the tucan and owl and bigger creatures like felines.

Joined to Praca Placido de Castro is Praca Rodrigues Alves (2 plazas) in the center of the city. At night you will find fastfood here with some very large and yummy burgers. The Central Market area near the river in front of the bus terminal a few blocks from the Old Market also has a lot of food including buffets and street kitchens. Don't forget the buffets of delicious hot foods and salads at the Old Market (more expensive than the Central Market).


View all photos in the Rio Branco Photoset

Hotel do Papai, Rio Branco, Brazil (April 2019 - 5 nights) - Room 26 on the first floor offered a fantastic view for people watching on the side street off the main road. I am talking about watching street people, hobos, drug addicts and prostitutes. It is utterly fascinating! $90 Reals ($23USD) for a nice room with private bathroom, wifi, fridge, aircon and tv (never switched it on, the show was the view from my window). I spent 5 nights at Hotel do Papai which is located in the center just along from the more expensive hotels near the main plaza. The hotel is secure and is run by a Lebanese man. Recommended for folk who enjoy people watching!
Brazil Travel Blog | Photos of Brazil | Festivals in Brazil | South America Videos 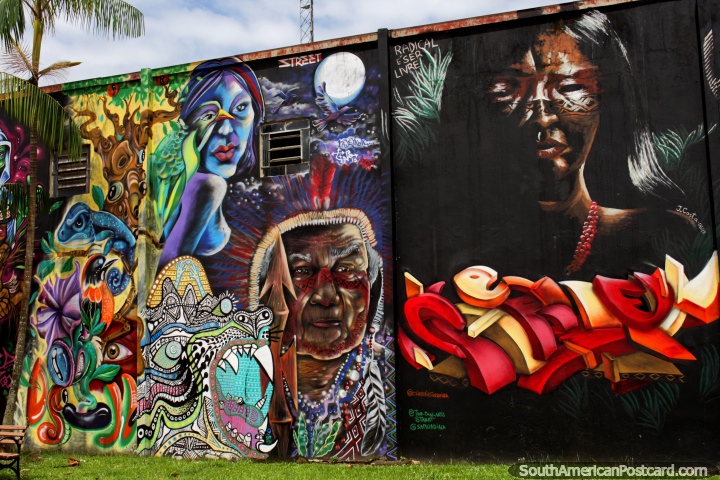