It is nice around the central historic and business areas in Rio de Janeiro.

Ipanema Beach, one of the great beaches to enjoy in Rio de Janeiro.

Lapa neighborhood with the church on the hill, Rio de Janeiro.

The most striking feature about Rio de Janeiro is its setting in a harbor of compact mountains and beautiful beaches. Add to that several spectacular landmarks, a diverse culture, economical buffet lunches and as I discovered, some phenomenal architecture! I arrived in Rio by plane from Foz do Iguaçu (1hr 50mins) and took a taxi from the airport to a hostel.

I decided that the best place to be based while in the city would be in Santa Teresa, on the hill, this is central and there are many hostels around this area. It's about a 10min walk to the nearest underground train station - Carioca. I didn't want to go straight to the main attractions like the Jesus statue and beaches. I wanted firstly to discover the inner city, the architecture, just see what I could find on foot.

The streets around Centro, Lapa and Gloria have many historic buildings, this is the best place to explore the architecture of Rio de Janeiro. The cathedral looks like a beehive and is almost identical to New Zealand's parliament building, known as the Beehive! There is the huge pink palace - Palacio Maconico do Lavradio and other old buildings nearby that look fantastic reflected in the mirrored windows of the tall modern buildings. The theatre is fit for a king with its gold and domed facade and stone columns - Theatro Municipal. See the spectacular buildings around plaza Praca Floriano (Cinelandia) like the town hall - Camara Municipal. Convento de Santo Antonio church over 400yrs old, church Igreja Sao Jose (1842) - old churches like these have magnificent interiors! There's many palaces it seems - Imperial Palace (Paco Imperial) and Tiradentes Palace (Palacio Tiradentes). The huge and long white arches known as the Arcos da Lapa is an interesting and edgy part of this area, there are a few street murals and off the beaten track side streets around here so be careful. Also be aware there are quite a few street people and cokeheads living rough around the arches. Some of the street artists who have murals in Lapa include Alex Andrepuga, Cris Rodrigues and Jerry Batista. Plazas are plenty in Rio de Janeiro, Praca Mahatma Gandhi has a fountain and is a relaxing place to be.

Mid to late afternoon is a good time to head to the top of Santa Teresa hill for awesome views of the city and mountains. Santa Teresa hill has stairs going straight up but it's extremely steep, best take a taxi up to the Park of Ruins (Parque das Ruinas), this is where you go for the views which are fantastic. It's not nearly as high as the Jesus statue, but the view is closer and clearer. Sugarloaf Mountain is a breathtaking sight indeed, it stands 396 meters and you can take a cable car to the top. You also get a pretty good view of a favela (shanty town) surrounded by city buildings between the Parque das Ruinas and Sugarloaf.

A Magnificent Harbor and Many Sugarloafs

The harbor is magnificent with lots of tiny islands with green peaks dotted around it and nice blue ocean. Many small versions of Sugarloaf Mountain are scattered around the harbor, they stick out of the terrain like separate entities. Beside the harbor is the city airport with planes coming and going quite regularly. In the far distance you can see the Jesus statue (Christ the Redeemer) perched on top of a hill. The views are a lot to take in, there is much for the eye and brain to process! You get a pretty good idea of Rio's layout from the top of Santa Teresa hill. Awesome!

Next day I decided to visit Rio de Janeiro's 2 most famous beaches - Copacabana and Ipanema. Copacabana is most beautiful with pure white sands, crashing waves, greasy baking bodies in bikinis, massage tents, cafes, restaurants 'n' bars, sandcastle professionals, palm trees and coconuts, beach soccer and volleyball, colorful umbrellas and it's very clean. It sits in front of a long boulevard lined with apartments and hotels. Ipanema was much more crowded but has some Sugarloaf type mountains at one end and has many tents on the beach called 'barracas'. A barraca is a beach tent that sells good food and colorful fruity drinks. One such barraca at Ipanema I noticed in my photo has a website - Barraca da Miriam.

The Jesus Statue of Course!

After a rest day I thought it about time to visit Rio de Janeiro's tourist attraction Number 1! Of course it's none other than Christ the Redeemer, the huge Jesus statue! I must inform you that this is not the tallest Jesus statue in South America. The tallest Jesus statue is Cristo de la Concordia in Cochabamba, Bolivia! It's just 4 or 5 stops on the underground train from Santa Teresa to the station closest to Christ the Redeemer but then you need a taxi unless you want to walk for 20mins to the entrance, maybe better to just get a taxi or a bus there. From the entrance I took the train up the steep Corcovado Mountain (710 meters) to the peak where the place is an absolute circus of activity encompassing this huge statue and the otherworldly panoramic views. I felt like singing that song 'I'm on the top of the world looking down on creation etc etc'. It was built (finished) in 1931. I visited late afternoon for the sunset, it's a good time to go, it's extremely hot in Rio in the daytime. Not much more to say about Jesus apart from that you gotta go! You can't not! Here's the official site of Cristo and you can buy tickets.

Be careful in Rio for pickpockets (one tried and failed) and dodgy shoeshine men who put a thick yellow liquid on your shoe as you walk, then tell you a bird did it. Happened to me on the street around Copacabana beach. I told him I knew that game and kept walking. Water from a puddle cleaned my shoe.


View all photos in the Rio de Janeiro Photoset

Rio Hostel and Suites, Rio de Janeiro, Brazil (April 2016 - 6 nights) - I spent 6 nights here and stayed in a couple of rooms, the cheaper $17USD budget room and the better $28USD room (3 nights in each room). It's a good hostel with kitchen, included breakfast, a pool to cool down in and a good wifi signal. Located a little way up Santa Teresa hill in the central city. The walk uphill from the city center to the hostel is quite testing indeed. You do however get some great views of Rio from this hostel. Recommended.
Brazil Travel Blog | Photos of Brazil | Festivals in Brazil | South America Videos 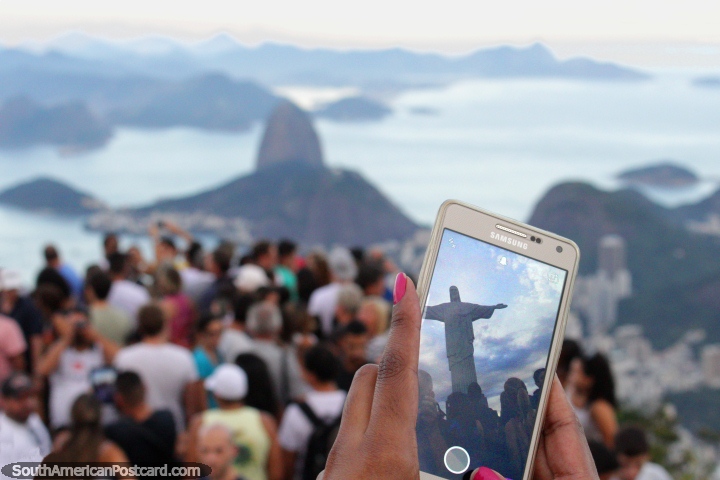