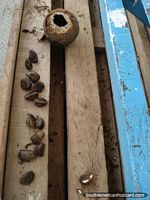 Small town on the Amazon river.

Huge catfish in a local mans canoe on the Amazon river. 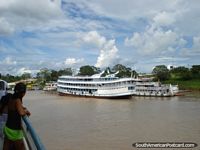 Arriving in Tabatinga port on the borders of Brazil, Peru and Colombia after 6 days/nights from Manaus on Amazon river.
Map location: Manaus to Tabatinga (Amazon River), Brazil

I wanted to get back to Colombia from Manaus on the Amazon River, it is a long 6 night journey upriver but I was looking forward to having an experience that I think many people wonder what it would be like to do. I bought a ticket from down at the port, the cost was $340 Reais which is just over $200USD. This included everything, 3 meals per day and a place on the crowded hammock deck. I had to buy my own hammock of course.

The boat is usually docked in the port the day before the journey begins loading up and I was told that if I wanted to I could set up my hammock in a good place the day before and stay the night, but I chose to stay just one last night in a comfortable bed in my hostel. The boat was due to leave at 1pm. I made my way there at around 11am. By this time the 2nd deck which is where all the hammocks are looked like a hammock city or hammock hell but I wasn't sure which. Anyway, I made my way into the middle somewhere and strung my hammock up amongst a friendly looking bunch of folks. There were only 2 or 3 other backpackers like me aboard, it was mostly people from Brazil and some from Peru and Ecuador.

At first I couldn't see how spending the next 6 days and 6 nights in this crowded jungle of hammocks would be fun, people on both sides of me, above and below and all around. After my initial shock and after resigning to the fact that this would be the way it would be - I started to see the funny side, more or less, a little bit. There are private cabins available that have a couple of bunks and a small bathroom in them, the price is probably up there I'm sure.

The boat, the Voyager IV left Manaus on time. Very soon we would see the 'Black and White Waters', also known as the 'Meeting of the Waters' or 'Aquas Negras y Blancas'. There are tours from Manaus to see it but you don't need to do a tour if you are leaving Manaus on the river, you see it for free. This is where the Solimoes River (white) converges with the Rio Negro (black), they have different densities and don't mix together for several kms. Around 45 minutes into the trip was where the clear line in the river between the black and white parts could be seen as we cruised steadily on the black water towards the white water that was fast approaching. And then the moment came when we crossed from the black to the white waters! A real wow experience, like standing on the equator or something, and then it was over.

So it began, life onboard the Voyager IV, nothing too much to do but enjoy the scenery, take photos and talk with the other people on the boat. Traveling on the Amazon River is an experience that unfolds very gradually, each bend, corner and curve offers a glimpse into how the local people go about there daily lives far away from civilization and how the river itself is affected by the constant flow of boats up and downstream. One thing that surprised me, although it is a natural occurence, was the amount of erosion on the banks of the river, like the forest is slowly being eaten by the rivers waters. Often big chunks of earth along with the trees standing on it get taken hostage by the river.

What was the food like onboard? The food was actually very good. Catering for up to 283 passengers each day. Breakfast was between 6am and 7am and was very basic - coffee and bread with butter. Lunch between 11am and 12pm was a big hot meal, meat or chicken, rice or pasta, beans, potatoes or potato salad. Dinner served between 5pm and 6pm was similar to the food served at lunchtime. The dining room can only seat around 25 people at a time so people ate in shifts during the hour. Basically there was a queue outside the dining room. When people finished, others were let in. It worked well and you could fill your plate up reasonably nicely without getting too many dirty looks from others.

Life on the boat was pretty relaxed. People sat around and talked, chilled out in their hammocks, hung out on the top deck, played dominoes or watched tv. Children had the most fun running around playing games. There was a shop on the top deck where you could buy ice cream, chocolate, candy, drinks and hot sandwiches. The few powerpoints around the boat were in high demand. The best way to ensure you can charge your phone, camera battery or computer is to buy a double plug before the journey, then you will always be able to charge up.

While the boat is moving there is a good breeze blowing through the deck downstairs. But when the boat stopped which during the 2nd half of the journey it did a lot, it got very hot. The boat stopped at many ports along the way, for hours at a time. 6hrs at one place, 12hrs at another, in total around 30hrs was spent docked at one remote port or another delivering goods and products to the small communities along the river. The stocktaking and counting as the goods left the ship was tedious and not great for the passengers, but it was part of the journey, however frustrating.

We passed many little communities on the banks of the river, several houses grouped together or sometimes just one or two. The larger ones would have a classroom and church too. The locals boats would be sitting in the water ready for fishing. The kids would often wave to the boats passing by and shout out. Each evening the forest around us became a silhouette and the sunset magical. Sometimes locals would come out to the boat in their small fishing boats and get a few goods or to bring a new passenger out. They often had some interesting looking fish in their boats, mudfish or in one case huge catfish. Some of the places we stopped at to deliver goods were Fonte Boa, Tonantins, Sao Jose, Santo Antonio, Amatura and Sao Paulo de Olivenca. Like I said earlier around 30hrs in total sitting at one of these ports.

After a few days the people onboard kind of become a big family, thinking and feeling the same things. As we came closer to our destination, the river branches out and continues to Ecuador, there were boats docked that will take you there. By around day 4 I was starting to get cabin fever especially with all the stops we had, however I survived 2 more nights before the Voyager IV arrived in Tabatinga. I was looking forward to being able to go for a walk and sleep in a bed. The Amazon River experience for me was an amazing one and I cannot describe it exactly, it is another world. All I can say is that it is big, long and the rainforest is very green and there are a lot of trees. I didn't see any lions, tigers or elephants standing at the waters edge, just some birdlife really. My photos will help give you a picture. I have also done 3 other shorter Amazon River journeys - Santarem to Belem (43hrs) and Belem to Macapa (26hrs) in Brazil. And in the Peruvian Amazon - Yurimaguas to Iquitos, 3 days 2 nights.


View all photos in the Manaus to Tabatinga (Amazon River) Photoset 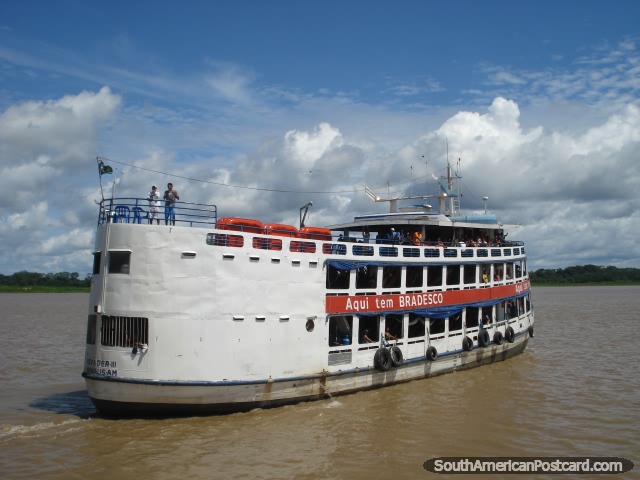