Quito, Ecuador - How Many Historical Churches Can You Count? 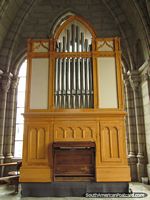 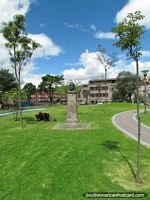 Relax on the green lawns of park La Alameda in Quito. 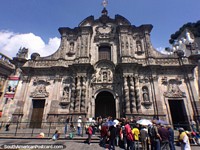 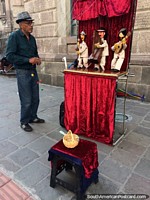 Quito, especially the Old City is a treasure trove of historical sites, colonial buildings and vibrant streets. I have never seen so many churches in one place. The city has some lovely parks and fun recreational activities. If you are a keen photographer you will have an absolute ball capturing the city of Quitos many delights. I had passed through Quito a few times before but had never stayed here to check the place out, this time I did and I am amazed at how much I saw in the 3 days I spent here this time. I stayed in a hostel near the Old City which had a balcony with good views at night.

It was a beautiful sunny day the morning I arrived. I headed out by foot towards the historical center of Ecuador's capital Quito, straight to Plaza de la Independencia. I always start exploring new places from the central plaza. On my way here I passed the theatre, The Teatro Nacional Sucre, its a big white building with columns and archways and gold designs at the top. Here is the theatres website. The church of San Agustin was also nearby which was built in the late 1500's by Spanish architect Francisco Becerra (1545-1605). I now came to the plaza, an attractive area and bustling with activity. On one side of the plaza is the Cathedral with its green domes, on another is the Presidential Palace and there is a palace on one other side also. Nearby is El Sagrario church, an amazing building made from volcanic gray stone, it took 160yrs to construct and was completed in 1765.

I walked in the direction south of the historical center towards El Panecillo hill, but I stopped at the big yellow archway that leads up the stairs to the top. Absolutely do not continue through this archway up the hill by foot, it is very dangerous. Go by taxi to see La Virgen de Quito monument.

Churches Around the Streets

I stopped at a shop that was cooking and selling all kinds of sugary peanuts. I got some chocolate covered ones, yum! By now I was just wandering the streets and going in any direction that looked interesting. Next I came to another church, a monastery, Monasterio de el Carmen Alto. All the churches have a plaque with its name on it which is good, it is hard not to come across a church every block or 2. Church Carmen Alto has 2 bell-towers and 4 stone columns surrounding a big wooden door. A little while later I found a plaza and a church called Iglesia del Monasterio Santa Clara, a huge line of people stood outside waiting to get in. Ice-cream is popular on the Quito streets, ladies carry around tubs with cones sitting on top, it is hard not to buy one at some stage during the day. The cobblestoned Plaza de San Francisco was where I found myself next and yes a church on one side, Capilla de Cantuna, it was a good place to sit down for a rest and watch the locals hanging out and kids playing and feeding pigeons. Soon after I found more churches, Iglesia Alianza 'El Tejar' and La Merced and a statue of Spanish conquistador Sebastian de Belalcazar. Street after street of colonial houses and buildings in pastel colors with balconies, lamps and flower pots on all sides.

I was now walking up a road in the north / east away from Panecillo Hill towards the great Basilica del Voto Nacional church which can be seen from different parts of the Old City. I took a few photos from outside, the building is huge and very spectacular. Being the end of the afternoon I decided I would come back in the morning and buy a ticket to have a look through. The ticket cost $2, the Basilica is 150m long, 35m wide, 35m high in the central ship and 15m in the votive chapels. The towers are 78m high, 73m in the dome and 16m by 45m on the base of the towers. Outside is a statue of Dr. Gabriel Garcia Moreno (1821-1875), twice President of Ecuador. Inside I went! It's basically a huge playground where you can climb up ladders into the towers and into the clock room to see the mechanics that turn the hands. There are many bright colorful stained glass windows and a wooden pipe organ but the best thing are the views of Quito once you climb to the top of the tower.

It was time now to visit some of the parks in the city. Firstly across the road from where I was staying was Parque La Alameda with its grand monument to Simon Bolivar called Carta A Simon Bolivar (Letter to Simon Bolivar). The park has nice grass areas and trees for shade, great place to sit down and enjoy a sandwich. Parque La Alameda has monuments to Carlos Maria de la Condamine, Antonio de Ulloa, Pedro V Maldonado, Luis Godin, Pedro Bouguer and Jorge Juan. Most people in the park hang out by the little man-made lake where you can hire a little pedal powered boat or a dinghy with oars and cruise around on the water. Food stalls cooking up hot bbq food were busy taking orders - kebabs of meat or chicken with potatoes. In the middle of the park is an observatory open on clear nights for star and planet gazing. Near the lake on the parks northern side is a big stone spiral that you can walk up for views. Across the road is church, Capilla de El Belen. I continued heading north past a big stone college Colegio 24 de Mayo to Plaza Republica de la India where there is a monument to Mahatma Gandhi (1869-1948).

Now I went to Parque El Ejido, Quitos biggest park. The park was full of people enjoying the day playing soccer, having lunch and being entertained by street entertainers. A monument to Jose Maria Velasco Ibarra (1893-1979) President of Ecuador 5 times, greeted me. There is a monument also to German explorer and writer Alexander von Humboldt (1769-1859). This really is a beautiful park, so many trees, big tubs of mango, papaya and banana fruit salads, kebabs on a stick, a few fairground type games and everybody having a wonderful time. There is a big kids playground and bikes and buggys for them to ride around on at the northern end. Along the street at the stone archway are many art and painting stands and a whole bunch of monuments to famous men, Dr. Aurelio Villagomez, Dr. Angel Polibio Chavez, Dr. Luis Felipe Borja, Juan Isaac Lovato Vargas, General Julio Andrade, Don Ricardo Jaramillo, Sandor Petofi, Fedor Mijailovich Dostoievsky, Juan Montalvo, Benjamin Carrion, Oscar Vargas Romero, Cesar Vallejo, Jorge Carrera Andrade and Jose Enrique Rodo, they are everywhere. This brought me to the end of my 2nd day in Quito and I headed back to base for the night.

I set my last day in Quito to have a look around the New City. I took a walk down the main street Mariscal Amazonas, also known as Av. Rio Amazonas. It's modern. I visited Plaza Borja Yerovi, church Parroquia de Santa Teresita and Parque Nautico 'La Carolina' where I took another ride on a pedal powered boat around the man-made waterways. Quitos botanical gardens are also located in the park, Jardin Botanico de Quito, $3.50 adults, $1.75 kids. I walked past the military college Colegio Militar Eloy Alfaro, you can't go in but you can see some things from the footpath - several cannons, statues and monuments. Quitos new city has many airline and tour companies selling Galapagos tours and flights to all over the world. I saw along the way statues of lawyer Jaime Hurtado Gonzalez, President Eloy Alfaro, politician Vicente Rocafuerte, President Gabriel Garcia Moreno and political figure Jose Maria Velasco Ibarra.

I have to say that at some point as I walked between Parque La Carolina and the Military College I nearly got robbed of my camera. 2 young men approached, one from behind and one in front, they asked me for $1 for which I replyed I didn't have any money (I had spent it all). I think if had put my hand in my pocket to get money out they would then have gone for my camera that was around my neck while my hands were not free. I kept my arms ready for any problems and looked them in the eye and stood strong until they finally went away. To me the New City felt less safe than the Old City which had a good police presence. Be aware of your surroundings at all times and keep your eyes open.

Overall I had a great experience and saw a lot in Quito, next time I pass through I will see more. That night I made my way to Terminal Urbano Quitumbe for a 5hr 30mins bus ride south / east to Tena, Ecuadors jungle region.


View all photos in the Quito Photoset

Hostal Primavera, Quito, Ecuador (October 2018 - 2 nights) - Located at Bicentenario Park in north Quito. Hostal Primavera cost $18 for a great room for 2 people with private bathroom and wifi on the top floor with an awesome view out to the road and hills. There are plenty of eating options along the road outside especially in the mornings around 10am when the students eat on the street. The hostal is not too far from the airport, about halfway between the airport and the city center. Recommended.

Hostal Escocie, Quito, Ecuador (October 2018 - 1 hour) - Was brought here by a taxi driver who thought it would be a good place to stay or maybe he was getting a cut. Checked in, then was taken to another building where the room was. Shared bathroom but no towels or soap. After an hour I decided I didn't want to be here and checked out. I paid $20 for 2 people and received $15 back. Why stay in a place like this when you can get a room in Quito with a private bathroom for less money, don't bother!

Hostal Las Orquideas, Quito, Ecuador (July 2015 - 3 nights) - Located 8mins walk from Bus Terminal Quitumbe in south Quito, you can see it up on the left from the terminal entrance, the tall red building. $18USD per night and comfortable too. I had a room on the top floor with private bathroom with very hot water, tv and wifi. Handy location if you want to head south of Quito early in the morning or if you arrive at the terminal late at night. I stayed here for 1 night at the beginning of my travels and for 2 more at the end. 45mins by taxi to the airport or 90mins by bus. Recommended.

Hostal Marsella, Quito, Ecuador (July 2011 - 2 nights, July 2012 - 1 night) - Cheap rooms and a great rooftop balcony with hammocks with views over the city. It is located close to the historical part of Quito. It's safe and secure and has a restaurant and free wifi internet. I liked it here enough to return for a night a year later. Recommended.
Ecuador Travel Blog | Photos of Ecuador | Festivals in Ecuador | South America Videos 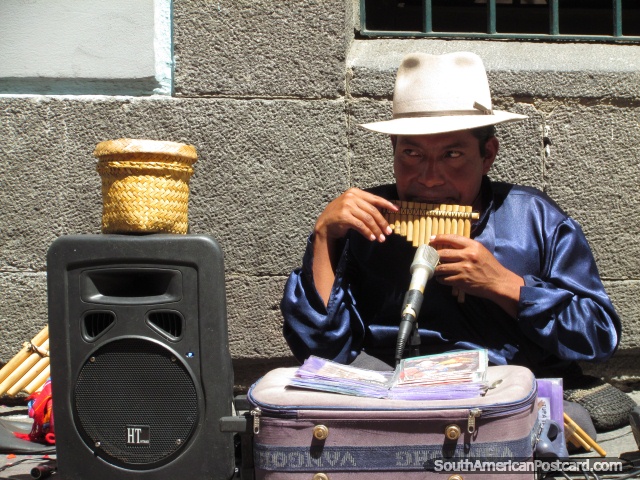