Portoviejo, Ecuador - Best Thing To See Is The Botanical Gardens

Wooden bridge with a thatched roof and a garden of wood, botanical gardens, Portoviejo. 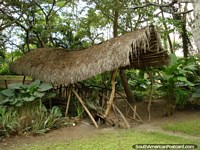 Wooden bridge under a thatched hut at the Botanical Gardens in Portoviejo.

Pink and red flora, the green beauty of the botanical gardens in Portoviejo.

At sometime around midnight I turned up in Portoviejo after traveling all day since the morning from Piura in Peru up the coast through Tumbes and into Ecuador passing through Guayaquil. This was my second time in Ecuador. Portoviejo is not in the Lonely Planet and it is easy to see why. But I have good friends here that I like to visit. My 3rd time in Portoviejo I had been traveling all the way down the coast.

I had no idea where I was going to stay this night. A pair of local women were waiting to be picked up by a brother and offered to give me a ride to find a place to sleep for the night which I gladly accepted. There was very little to choose from in the center of the city. The first hotel I tried wanted to charge me $18USD, so I tried another and there was a room available at about half that price.

After a good nights sleep I awoke to the sound of a busy street outside. From the balcony I could see a lot of powerlines and an unattractive street below. I decided that I wanted to change to another hotel for the next night. I found a cheaper one around the corner, the room was pretty dingy but was only $6USD per night.

Walking in the City

My friend came to greet me and we went out walking around the city. We came to a plaza and church with 2 towers with yellow domes at the top, one is a bell tower. We walked along a busy street toward the stadium that had several statues and monuments in the middle. The center of the city is very busy and very noisy, the sound of vehicles is a constant problem. There are markets, fruit stalls, clothing and people walking around selling lottery tickets and random things like tv remote controls. People ride around on trolley bicycles which can carry goods and produce on them. There are powerlines running in all directions above the streets attached to buildings of various colors.

The next morning I was awoken by the busy streets below from the vehicles and horns and decided to find a place to stay that was not in the center of town, which was not easy. In the end I opted for a room inside a rent by the hour hotel that was very near to my friends house and across the road from the stadium called Estadio Reales Tamarindos and near to one of the universities. This was the best option I could find around the area but it was a clean hotel and the constant stream of guests day and night didn't bother me.

You can't escape the fact that in Portoviejo there is a lot of concrete and it is very noisy. There is not that much to do here but a good place to escape the noise is to visit the Botanical Gardens which has some animals, plantlife, flowers and ponds. As my friend and I walked along the hot and busy street towards the Jardin Botanico we passed a group of youth playing basketball on an outside court. Along a wall on one side of the court was graffiti of the face of Che Guevara. The fence leading up to the gardens has nice flowers of red growing along it. It was great to get away from the road as we entered and walked up the grassy pathway and under an interesting tree that had pear shaped things hanging from it but they were brown in color. We came next to a nice pond area that had trees and ferns growing all around and a wooden bridge and waterfall. Nearby we passed a garden of small plants all perched on logs of wood. A large iguana sat in a tree above us. We then came to a special area for the animals, this area also had amazing fauna and a small pond of turtles sitting on rocks. There was some kind of spider monkey that had a lot of character as well as a very funny bird that was very intent on peaking my camera as a I tried to take photos of it. We also saw a raccoon or badger of some type and a happy pair of green parrots, some ducks and other birds. Later as we sat around the main pond near the bamboo we noticed in the water the nose and eyes of an alligator. Nearby was a group of tiny baby alligators. Around the pond are beautiful fan shaped ferns overhanging the water, palm trees and colorful flowers. There is an open green grassy area near the pond where we saw a pair of very large iguanas moving slowly across the lawn. This day was a great experience. Again in 2018 I visited the Botanical Gardens for some new photos after traveling down the coast.

I spent another 3 days in Portoviejo for a total of about 6 nights experiencing some of the weekend nightlife with a group of friends at a nightclub where we danced and drank shots. Later we were at an outside eating place sitting at bar stools eating rice with chicken when I felt someone flicking their finger in my back pocket. I was enjoying my food and after a few times I realised what was going on and turned around and had a few words with the guy standing behind me. All the people I met through my friend in the city made it a great stay. They took me to their university a couple evenings and I sat in on class for a while on one occasion. After nearly a week in Portoviejo I was ready to leave and go to much greener pastures.

Bus to Banos via Ambato

I wanted to go to Banos. In the evening after eating at a great Chinese restaurant I caught a bus through the night through Ambato where I changed buses somewhere around 5am in the wet and cold bus terminal and travelled to Banos as the sun came up.

After my 3rd time in Portoviejo I took a bus 3hrs via Jipijapa to Montanita Beach.


View all photos in the Portoviejo Photoset

Hostal Don Gregorio, Portoviejo, Ecuador (October 2018 - 2 nights) - $6 per person for a bed in a room with shared bathroom. The hostel is located opposite the cathedral in Portoviejo, a convenient location for food and the market area. I normally like private bathrooms and this was the only place I stayed at on this trip that didn't have one, but it was fine for a couple of nights and cheap too.

Hotel San Marco, Portoviejo, Ecuador (May 2010 - 1 night) - A room on the 2nd floor with small balcony, it had a basic bathroom, the bed was not great. It is on a busy and noisy street in the center of the city.

Hotel Victoria, Portoviejo, Ecuador (May 2010 - 1 night, Jul 2012 - 3 nights) - One of the worst hotels I ever stayed in and so noisy that I needed earplugs. It was very cheap at $5USD per night but was just so bad I had to leave after 1 night. I must be a sucker for punishment because I stayed here again in 2012 for 3 nights, pretty nasty, pretty cheap.

Patricio's Hospedaje, Portoviejo, Ecuador (May 2010 - 4 nights) - Out of the very center of the city beside the soccer stadium, this is the best I could do in Portoviejo, a rent by the hour hotel, although my room was not a room used for those purposes, it was a single bed room. I actually enjoyed my stay here, the place is clean and the staff are friendly. I had my own room with bathroom and tv.
Ecuador Travel Blog | Photos of Ecuador | Festivals in Ecuador | South America Videos 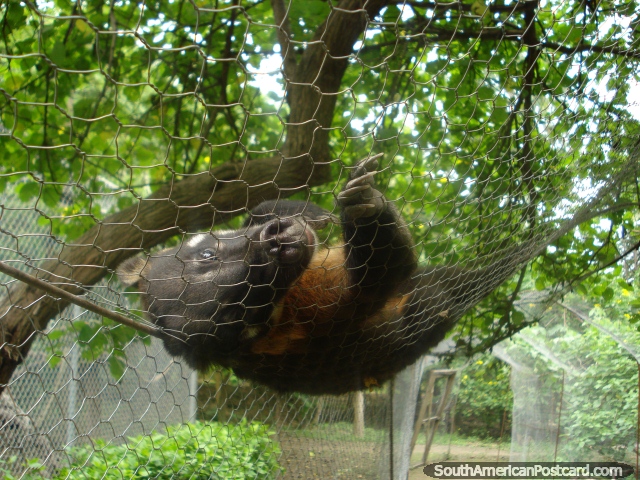