Series of life-size wood carvings outside the cultural center in Ibarra.

Church Iglesia San Agustin in Ibarra was built between 1876 and 1880. 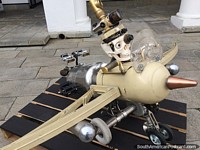 Ibarra is a pleasant city halfway between Quito and the northern border, it's slightly north of Cayambe (45mins) and Otavalo (20mins) and worth a day of sightseeing to enjoy art, culture and museums, the beautiful plazas and parks, a significant number of historic churches and buildings and to see the famous San Antonio wood carvings. Ibarra is known for its colonial white facades (hence called The White City) and was rebuilt in 1872 after a huge earthquake in 1868. Yahuarcocha Lake is 2kms to the east and the city also has a train station. The road west to San Lorenzo on the coast begins from Ibarra.

The heart of the historic center in Ibarra is based around the twin parks of La Merced Park (Parque La Merced) and Pedro Moncayo Park (Parque Pedro Moncayo). These 2 principal parks are separated by just 1 block of buildings that house the cultural center (Centro Cultural El Cuartel) and government offices. This is the best place to start a city tour on foot in Ibarra. In all and various directions you'll find the sights in the city from here!

Ibarra has a fantastic array of historic churches, 10 or 11, of which I've seen at least 8! Capilla San Diego - has a facade made of stone with the main attraction being the main door that dates back more than 150 years as well as paintings by Bernardo de Legarda (c.1700-1773). Iglesia Basilica de La Dolorosa - built in Neo-Romanesque style and was reconstructed after the earthquake of 1987. Consists of a single nave with a coffered ceiling. Capilla Episcopal - built before the cathedral and stands directly beside it. Consists of a single nave in its main altar with an image of Christ crucified from the colonial era. Cathedral - built in Roman style and was reconstructed after the 1868 earthquake. Inside are valuable works of art from Quito School. Iglesia Basilica de La Merced - built at the beginning of the 19th century and is where the survivors of the 1868 earthquake returned. Built in Roman style, it conserves valuable paintings reminding us of the reconstruction of Ibarra. Iglesia San Agustin - built between 1876 and 1880. Depositary of rare specimens and works that existed before the 1868 earthquake in addition to several images from Quito School. Iglesia San Francisco - built in 1948 with a facade made of flagstone. The main altar has an image of the Virgin of Fatima brought from Portugal adorned by 12 stars representing the 12 tribes of Israel. Iglesia Santo Domingo - has a facade with Neo-Gothic / Romantic style and has valuable pictorial displays on exhibition inside. Iglesia del Senor del Amor - built in eclectic style and was reconstructed in 1948 after a fire. Built upon the ruins of a prehispanic temple, the same foundations of the Temple of the Sun where the Incas worshiped. It has artistic works of more than 150 years. Iglesia San Antonio - built in Colonial style, the towers were used by Simon Bolivar's troups to fight Agustin Agualongo in 1823. An image of the Virgin of Las Lajas painted on stone is venerated on the main altar.

San Antonio de Ibarra is just 6kms west of central Ibarra. It's a small village famous for its wood carvings. Wood carving in San Antonio is a tradition that has been preserved for hundreds of years by the local artists. Many wood carving galleries and workshops surround the main plaza. Luis Potosi is the most well-known wood carving shop in San Antonio. Usually in Ibarra itself you will see many of these fine works, life-sized figures depicting the people and culture of the region!

While in Ibarra check out the museum and cultural center - Museo y Centro Cultural Ibarra (Sucre Street). While here I saw a fantastic exhibition of works by the creative industrial artist Ramón Burneo called 'Longing for the future' (Añoranza de futuro). Ramón Burneo creates amazing robots and machines from pieces of industrial equipment - spiders, cars, planes etc. I'm sure there is always something interesting on exhibition here. Other museums in Ibarra include Museo del Banco Central and Museo Nicolas Herrera.

Trains Are Not Cheap

Ibarra has a train station. Around the station is an active market area where you'll often see goats for sale beside the train tracks. The trains are not for general transport, they are tours. The train from Ibarra goes to Salinas. The journey is 30kms, the day trip takes 10hrs, departure is at 10:30am Friday, Saturday and Sunday and costs a whopping $196USD. There are also train tours that last for 2 days and cost around $600USD, yikes! And I thought the Devils Nose train ride in Alausi was expensive at $30USD, what did I know!?

From Ibarra I headed west to the coast to San Lorenzo, a bus ride that takes 4hrs including a 30 minute stop for food.

Ramon Burneo has an exhibition of his machines of the future on at the moment in Ibarra Ecuador. See his planes & robots at the Cultural House (Casa de la Cultura)! #Ecuador #museum #Travel https://t.co/jcPK7K0Sef pic.twitter.com/wdF2UCCpx6


View all photos in the Ibarra Photoset

Hostal Salas Sevilla, Ibarra, Ecuador (September 2018 - 1 night) - Hostal Salas Sevilla is located a few minutes walk from the bus terminal in Ibarra. $15 for a room for 2 people with a private bathroom. The hostel has a large garage available also. It's just a few minutes walk along the train tracks and market area to reach the center of town and makes a convenient location to take a bus to your next destination.
Ecuador Travel Blog | Photos of Ecuador | Festivals in Ecuador | South America Videos 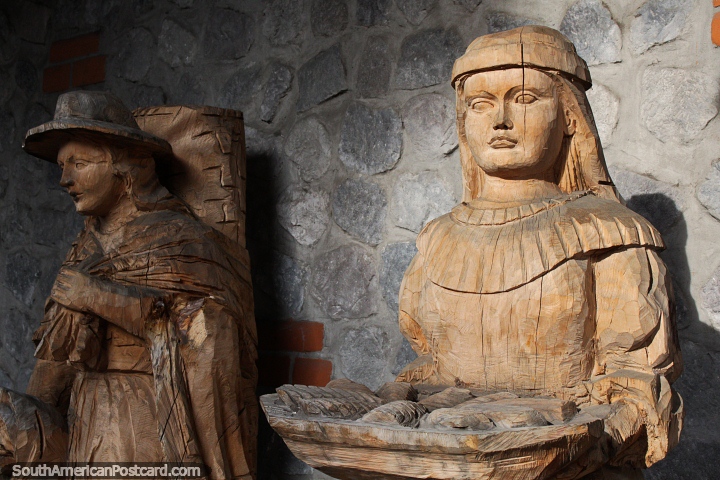