Macas to Zamora, Ecuador - I Love Bus Travel In Ecuador, The Windows Open

Gold village and religious stained glass windows in the church in Macas.

Red and yellow tiled artwork of the sun with a face in Macas.

Twice now in Macas, traveling the Oriente road in Ecuador's jungle. The first time coming from Puyo in the north, the second time from Limon further south. Macas is a fairly small place and not overly attractive apart from the Upano river and jungles surrounding it. Macas is known as a place to come to experience living with an indigenous family or community for a few days and a place to do jungle trips. There are 3 volcanoes nearby in Sangay National Park, they are active and it's possible to view them as well as some of the wildlife here. Rafting on the Upano river is another activity offered in the city of Macas. I didn't plan on doing any of these things, I just wanted to have a quick look around the city and move on this time.

I took a walk to the park and cathedral called Santuario Catedral 'Purisima de Macas' and payed a coin to go up the stairs to the belltower and balcony at the top. There are some pretty good views of the whole Macas area from up here - the city, mountains, jungle and river. Up the road from the cathedral there's another lookout point where you can see birds amongst the trees plus more views of the river.

I was ready to go to the bus terminal. I wanted to get south to Zamora. But first I had to get to Gualaquiza which is 6hrs 30mins away and then to Zamora from there. The bus ticket from Macas to Gualaquiza cost $8USD, it's around 190kms in distance. It is a great journey through small towns and villages built amongst the jungle. The bus passes through a bunch of places including El Paraiso, Arapicos, Metsankim, Santa Marianita and stopped briefly in Sucua at the bus terminal.

We continued on through Huambi and stopped in Mendez for 30mins for a lunch break. I visited the central plaza and park and took a few photos while in Mendez. There are monuments to Eugenio Espejo (1747-1795), a writer and laywer and to Eudofilo Alvarez (1876-1940), the founder of Mendez. Mendez is near the river and there are a few hostels in town, the people seem friendly. A group of guys wanted me to take their photo while I was in the park.

Just over an hour later we pass through the town of Limon, a small place in the jungle hills with the river running through the middle of it. A short time later we came to Indanza.

There are a few things to do in Indanza including riding the cable-car across the river and seeing some petroglyphs which are rock engravings at Petroglifos El Catasho. As you leave Indanza you will see a big mountain or volcano in the distance.

The next place you come to is San Juan Bosco, shortly after passing through the big mountain is directly on the left. It was starting to get dark when we passed through a village with a small orange church 50mins later, the road now was unsealed and bumpy.

In the early evening I arrived in Gualaquiza and learned that it was another 3-4hrs to Zamora so I decided to sleep the night and continue south at first light. Gualaquiza is a lovely little place with steep roads in the center, it was easy to find a cheap but good bed 5mins from the bus terminal. I rose at 4:30am and cooked eggs on my hot-plate in my room and took a 6am bus to Zamora.

The journey takes just under 4hrs but we did stop at various bus terminals along the way. I really enjoyed this leg of the trip, all of the little towns and villages and lots of little jungle churches, at least 15-20. From Gualaquiza to Zamora is 117kms and to Loja is 177kms. To Cuenca is 157kms, Sigsig 97kms, Yantzaza 72kms, Los Encuentros 53kms, Chiguinda 52kms and El Pangui 35kms.

You pass through amazing cloud forests and cross bridges over the river running beside the road many times. We got to Yantaza and stopped here for at least 20mins. There is a monument outside the bus terminal of a military man with a gun. Across the road is a hillside full of skinny trees. From here it is 9kms to Zumbi, 40kms to Zamora and Loja is 97kms.

Stopping next in Zumbi which is a nice place with its park, church and a few monuments. It's across the bridge on the other side of the river from the main road. A colorful monument of 3 men from different local cultures stands at the junction - a native Indian with a spear, another with a knife and a man reads from a book.

15mins later we arrived at the bridge in La Saguea, in fact there are 2 bridges. The road winds gently through the most beautiful moist green terrain, its paved and in good condition and we go over more bridges. By 10am I had arrived in Zamora where I planned to spend a few days.


View all photos in the Macas to Zamora Photoset


My Hostel & Hotel Reviews for Macas to Zamora, Ecuador:

Hostal Los Canelos, Macas, Ecuador (October 2018 - 2 nights) - The location is great being in the center of Macas on a street with many options in accommodation! $20 for a large room for 2 people with private bathroom. The problem was that the room had only one window that opened and ended up being far too hot being on the sunny corner of the building. With no fan or air conditioner, the room didn't cool down until the middle of the night. Just be aware of that, apart from that it is a good budget hostel.

Residencial Mayflower, Macas, Ecuador (July 2011 - 1 night) - A basic and cheap room in the center of Macas with a tv, bathroom is shared. Not flash bad not horrible.
Ecuador Travel Blog | Photos of Ecuador | Festivals in Ecuador | South America Videos 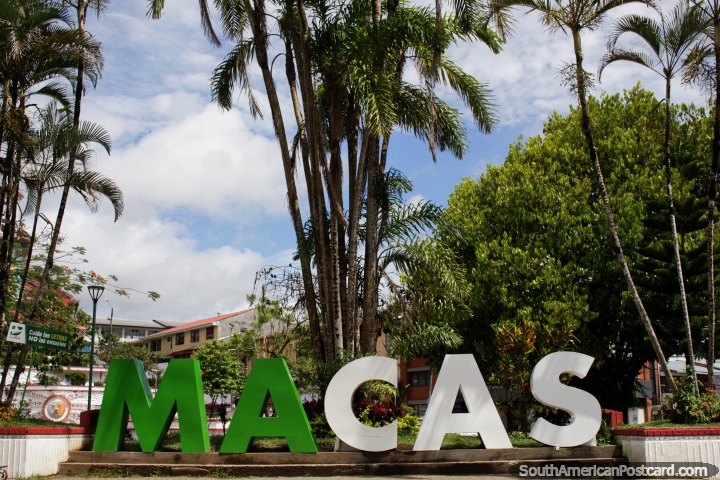