Manta - Tarqui Beach, Ecuador - They Catch The Fish We Eat The Fish 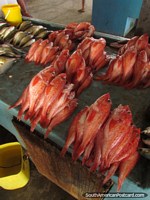 Orange fish at the market behind Tarqui Beach in Manta. 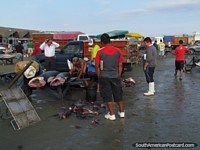 Chopping up some big fish at the beach in Manta. 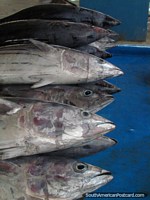 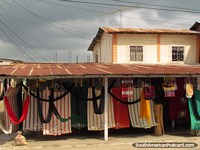 It was a 3 and a half hour trip north-west from Guayaquil up to Manta through the small towns of Lomas de Sargentillo, Pedro Carbo, Pajan, Jipijapa and Montecristi. I wouldn't describe the scenery as mind-blowing but I did see some cool monuments, the most memorable being the giant sweetcorn between Jipijapa and Montecristi. I should have stopped off in Montecristi for a quick look, there are some historic buildings and also this is the place where the famous Panama Hat is manufactured.

From the bus terminal in Manta I took a taxi to Tarqui Beach and found a budget hotel, there are a few hostels and hotels across the road from the beach. On the beach the locals were playing soccer and volleyball while pelicans scanned the water for fish as the sun went down over the city and port in the distance. That evening I used a local internet cafe and had some food and a beer at a little restaurant on the street. The main reason I came to Manta was to see Tarqui Beach in the morning as the fishermen brought their catches ashore.

The next morning I was at the beach by 7:45AM with my camera, there was a lot of action going on, a lot of shouting, many busy fishermen and restaurant owners. There was a lot of tuna and sharks, well, shark finning actually. This is very controversial of course and it was quite a gruesome sight seeing dozens of dead finned sharks laying all over the place, see video. Fish were being cut up and processed on the beach and loaded into the back of small trucks full of ice.

Behind the beach is the fish market - I made a video while I walked around. Beside this are the restaurants where I sat down for breakfast - meals included eggs and fish, shrimps and rice with fried banana, fish soup, fried fish and calamari. The meals cost between $4-$6USD.

Last but not least at Tarqui Beach beside the fishermens area are the boat builders, see video. A row of boat skeletons being formed into full bodied hulls by men with helmets, each helmet a different color - easy for identification around the site perhaps. It's interesting to watch for a while.

By 11AM I had made my way to the bus terminal where I took a 40min bus ride to Portoviejo.


View all photos in the Manta - Tarqui Beach Photoset

Hotel Vista al Mar, Manta, Ecuador (June 2012 - 1 night) - Small private room near Tarqui beach, the wifi wasn't working when I was there. Cheaper than some of the places around the area.
Ecuador Travel Blog | Photos of Ecuador | Festivals in Ecuador | South America Videos 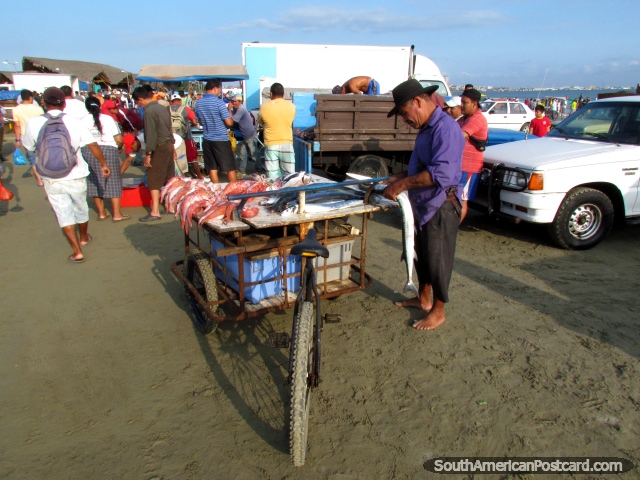