Preparation of the bizcocho mixture at San Pedro Bizcochos in Cayambe. 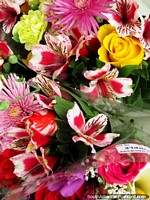 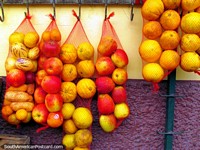 Apples, oranges and Andes fruit for sale in Cayambe. 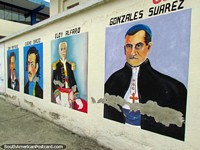 I visited Cayambe during my 3rd and 6th trips to Ecuador. The first time I left Tulcan by bus in the morning, passed through Ibarra and Otavalo and arrived in Cayambe about 4 and a half hours later. The second time from Quito Airport to Cayambe is just 45mins. I had read that Cayambe is famous for its flowers, biscuits called Bizcochos and there are pyramids here. From where the bus from Tulcan dropped me off I took a local bus into the center of town. I asked several locals about the pyramids but none had ever heard of them.

First thing to do was to try some Bizcochos. I visited the shop of 'Bizcochos Katherine', by the door is a huge pizza-type oven with Bizcochos baking. At the back of the shop the owners were happy to let me take photos of them working. I bought a few Bizcochos and took them away to munch on, they were very nice, crunchy and cheesy.

Nearby was a monument to David Elias Manangon Cartagena (1904-1979), a local professor, author and music writer. I also found a monument to Sergio Mejia Aguirre (1895-1972), a poet and professor of music.

I walked a couple of blocks to the central park - Parque Central 23 de Julio. It is a nice place with trees, flower gardens and a blue and white church Iglesia Matriz de Cayambe on one side, there are many indigenous people around. On the opposite side of the park is the museum and several colorful murals of important people to Cayambe, Dolores Cacuango (1881-1971) was involved in the indigenous rights movement. Another is of Luis Humberto Salgado (1903-1977), a famous composer and director of the National Music Conservatory. Others include Ruben Rodriguez (1904-1973), Transito Amaguana (1909-2009), an Ecuadorian indigenous leader and Eloy Alfaro (1842-1912), twice President of Ecuador. To the left of these murals is the museum and downstairs is the tourist office, ask about the pyramids here - Piramide de Puntiatsil.

I took a walk through the historical streets of Cayambe, there are many colorful houses, shops and balconies. There are more murals of famous Ecuadorians scattered around town, author Juan Montalvo (1832-1889), scientist and writer Eugenio Espejo (1747-1795), Eloy Alfaro and Gonzalez Suarez (1844-1917), a priest and historian. Cayambe has a few more churches and several parks and plazas - Parque Yaznan, Parque Ruben Rodriguez, Parque Nasacota Puento, Parque a La Madre and Plaza de Toros. The main festivals are the Equinox around the 21st of March and in the 2nd half of June the celebrations of San Pedro and Inti Raymi.

The area of Cayambe is known for growing beautiful flowers. They were selling them on the streets, roses of orange, yellow, pink, red and white.

In the area and towns surrounding Cayambe there are a few archaeology sites including some more pyramids called Piramides de Cochasqui.

Cayambe is a nice place to stop for an afternoon and spend a few hours exploring the city. There is a hostel close to the central park area if you wish to stay the night.

From Cayambe it is 28kms north to Otavalo, 18kms to Puembo, 70kms to Quito and 36kms to Oyacachi.

At the end of the afternoon I took a bus 25kms south / west (30mins) to Guayllabamba where I slept the night and visited the fantastic Quito Zoo on the next day.


View all photos in the Cayambe Photoset

Hostal Imperial, Cayambe, Ecuador (September 2018 - 1 night) - A hotel is only as good as the bed and unfortunately Hostal Imperial in Cayambe bit the dust on that account with a bottom sheet that just wouldn't stay in position. The room wasn't that bad but for $18 for 2 people I'd like a decent and comfortable bed thanks. Located a block or so from the main plaza. Disappointing.
Ecuador Travel Blog | Photos of Ecuador | Festivals in Ecuador | South America Videos 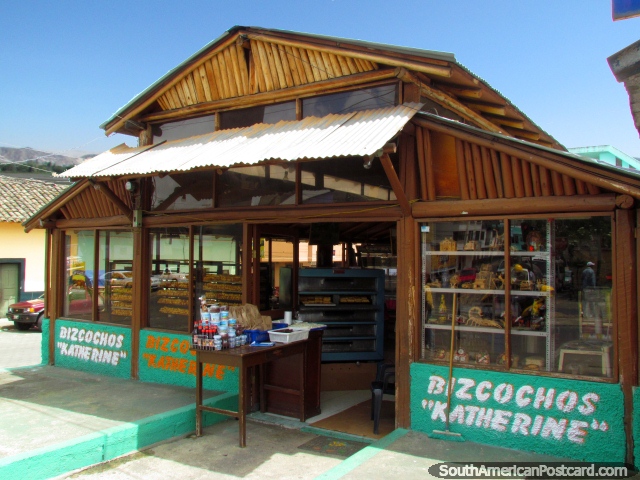