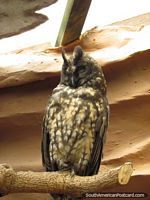 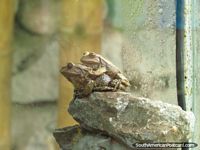 See frogs (ranas) at the frog sanctuary at Quito Zoo. 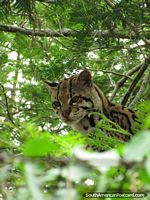 Ocelot cat known as Tigrillo sits in a tree at Quito Zoo. 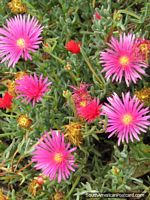 I travelled 30mins further south to Guayllabamba from Cayambe, it's 40 minutes north of Quito, the reason was to visit Quito Zoo, it's not located in Quito itself but here in Guayllabamba. I had heard it was worth visiting and I was glad I did, it was possibly the best zoo I have ever been to!

The animals are all well taken care of, many have been rescued from abandonment or illegal animal trafficking. Their habitats are made to be similar to their natural habitats in the wild. The zoo has several programs to educate locals and school groups on how to conserve the biodiversity of Ecuador. The zoo has beautiful gardens, trees and flowers with walking paths amongst the fauna.

How To Get There

The zoo is not on the main road in Guayllabamba, take a bus or taxi to the sign on the main road that says 3km to Quito Zoo and wait for a white and green taxi that runs back and forth from the road to the zoo. Opening hours during the week (Tue-Fri) are 8:30am - 5pm and on the weekends 9am - 5pm.

The Barizo monkeys were the first animals I saw. With their long tails and grey / yellow fur, they come from the Amazon jungle.

The huge Galapagos Tortoises are a playful bunch crawling around their enclosure especially considering their age and weight. They can live to be 250yrs old and weigh 300 kilos, they travel 300 meters per hour.

The Amazon Tapir is a large animal and looked to me like a cross between an elephant and a bear. It is known to be a fast runner and an excellent swimmer - helpful for surviving in the jungle.

An interesting bird especially with the textures and colors of its head and beak called the Gallinazo Rey was not visible to me but I have seen one before in Venezuela.

Able to dive at a speed of up to 200 km/h is the Black Breasted Eagle mainly gray in color and quite handsome, he is an excelent hunter and able to devour a mouse whole.

A group of wild bristly pigs called Pecari de Collar or in English Collared Peccaries have razor-sharp tusks and live in groups of up to 15 members. They can be found in Central and South America.

The zoo has 2 types of Cuchuchos / Coatis which are raccoon like animals, coastal and jungle. They live in trees and also on the ground. I was once attacked by a group of these guys at Iguazu Falls in Argentina, they wanted the food I was carrying.

The 2 black bears called Oso de Anteojos come from the mountains of the Andes from Venezuela down to Bolivia. They are in great danger from trafficking and exploitation. There are only 2000 left, their name comes from the fact that each bear has a unique design around its eyes.

I walked through the frog sanctuary - Ranas in Spanish, then to see some more tortoises, smaller than the ones earlier.

A small group of White-tailed Deer hung out in their pen. They have great hearing ability due to their large ears and are elegant runners.

The Ocelot cat known as Tigrillo comes from the Leopard family and is an extraordinary climber and likes to spend much of its time in trees. They are light enough to be able to climb along the branches.

A Tucan with blue eyes and a yellow beak comes from the Amazon jungle and coastal areas of northern South America. Tucans eat fruit, eggs and young of other birds.

From the snowy mountains of Ecuador all the way down to the south of Argentina comes the Paramo Wolf or Lobo. He produces a strong odor to mark territory. In his natural habitat he hunts at night for rats and rabbits.

The Jaguar was happily sleeping in a hammock in its den. A very handsome animal with its orange fur and black spots, a natural swimmer and very skilled at hunting for fish and caiman.

Not native to South America are 2 African lions, a male and a female each eating a piece of meat while laying on the grass. They come from the Amazon jungle and also from the jungles and coast of northern Colombia.

Macaws of blue, green, yellow and scarlet red, they love to eat seeds, sprouts and fruit.

There are Spider Monkeys, White Monkeys and the Woolly Monkey putting on a great show swinging around the bars and trees. The Woolly Monkeys tail is like a 5th hand.

With a wingspan of 3 meters is the Condor native to the Andes mountains, they are in danger with possibly only 50 remaining.

The big Monera Eagle views the jungle from the very tops of trees and has the ability to capture large monkeys.

I now arrived at the house of nocturnal animals - Casa de Animales Nocturnos. Only a few people are allowed in at a time, a guide takes you through. There are beautiful Owls that stare at you from above with one eye open. There is also a very cute and cuddly Sloth and a not so cuddly sleeping porcupine.

One of the other few non South American animals at the zoo are the Australian Kangaroos. There is also a kids area that has Llamas, Donkeys, Guinea Pigs and Turkeys.

All the animals at the zoo are wonderful, but what makes the other half of this journey spectacular are the pathways through the flora and fauna of the Andes jungle! Bosque Andino, flowers, pods, cactus, ferns and trees. Amazing shapes, colors and textures, great to photograph.

The Town and Plaza

After this fantastic experience at Quito Zoo I headed back into central Guayllabamba where I had slept the previous night a couple of blocks from the main plaza. The plaza was the place on the 5th / 6th July 1823 where the liberator Simon Bolivar organized an army to beat the 1500 insurgent troops of Colombian Agustin Agualongo (1780-1824) who had taken the city of Ibarra in the north. There is a tan colored church and a few shops and restaurants around the plaza.

Bus to Quito and Mindo

I collected my things from the hostel and caught a bus down to Quito and connected on another bus to get 2hrs west to Mindo, Ecuadors home of bird-watching.


View all photos in the Quito Zoo in Guayllabamba Photoset


My Hostel & Hotel Reviews for Quito Zoo in Guayllabamba, Ecuador:

Hostal C. Tipica, Guayllabamba, Ecuador (July 2011 - 1 night) - About the only hostal/hotel in town, a family run hostal with nice rooms and a big garden out the back, it cost $15USD for a room for 2 with tv and bathroom. It's a block from the central park in Guayllabamba.
Ecuador Travel Blog | Photos of Ecuador | Festivals in Ecuador | South America Videos 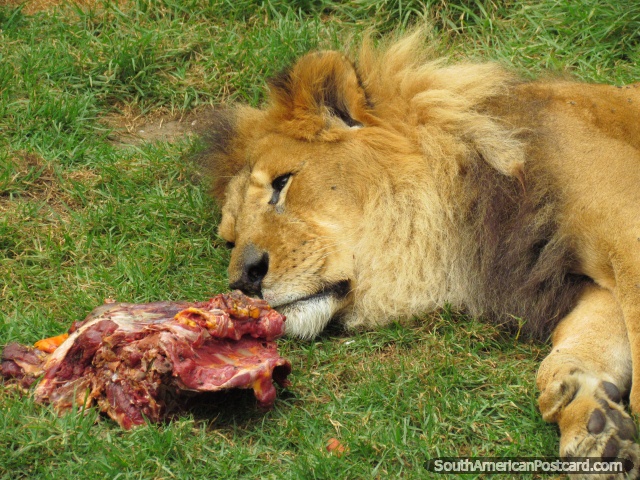