Fantastic religious mural inside the church in Yantzaza, service in progress.

Beautiful mural with waterfall beside at the malecon in Yantzaza at night. 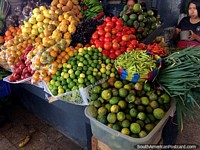 Lemons, tomatoes, beans, avocados and other fruit and veg at the Gualaquiza Sunday market.

Have you ever thought of traveling the Oriente Road by river? In theory you could ride the Zamora River all the way from Yantzaza south to Zamora then continue westward to Loja. I wonder if it is possible? My 2nd time traveling the Oriente Road, this time from south to north (Zamora to Puyo) but stopping at a few places in between (Yantzaza, Gualaquiza, Limon and Macas). Yantzaza is a jungle town that sits beside the Zamora River. A place to explore nature, see waterfalls in the area and go to the river beach. Yantzaza is also known for its interesting and typical cuisine from the Mestiza, Shuar and Saraguro cultures. Yantzaza is 41kms north of Zamora, a bus takes around 90mins but I decided to come here by taxi (30mins for less than $15USD).

Finding a hotel in Yantzaza is not difficult as there are many along the main road and around the central park. The main visual attractions in town are of course the central park and church but now there is also a new malecon (2014-2019) in Yantzaza - a public area with a water feature (river waterfall) and huge murals. The Mirador Park known as Parque Mirador has fantastic views of the great Zamora River from above and also a special cultural bronze sculpture of an indigenous man in a river canoe. He is Martin Ayuy, an indigenous leader who helped the socialization of the Spanish settlers with the indigenous people.

The biggest attraction in Yantzaza itself is definitely the Zamora River. It's beautiful down by the river with all the green hills, large trees and palms around. Take a walk along the road to the bridge and cross to the other side where Rica Beach (Playa Rica) greets you. It's a tiny beach but it does have sand and a nice setting. This part of the Zamora River is very calm, still and peaceful.

Some of the cuisine and culinary delights typical in Yantzaza are quite different from the culinary delights in other parts of Ecuador. For example I know Cuy (barbecued guinea pigs). I've seen Cuy in various places such as Banos, Saquisili, Otavalo and Cuenca. I didn't see Cuy in Yantzaza though. What they do eat here is a little different, for example, of the Mestiza culture - fried maggots (Tilapia frita), frogs legs (Ancas de rana), chicken soup (caldo de gallina). Of the Kichwa Saraguro culture - pinchi micuna (Community meal), tortillas de maiz (Corn tortillas), miel con quesillo (Honey with cheese), chicha de jora (Corn beer). Of the Shuar culture - ayampacos (fish, corn and vegetables), chica de chonta (fruit from the peach palm), chontacuros (barbecued maggots on a skewer).

Tourist Circuits With Many Waterfalls

The area around Yantzaza has many natural sights and things to do and see. The Guayacanes Circuit is around 35 minutes in a car from central Yantzaza. Here there are various attractions including the Moon Waterfall (Cascada la Luna) 20 meters, natural pools, Guayacanes Caves (Cueva Guayacanes) 20 meters under the ground, Corazonada Waterfall (Cascada la Corazonada) 20 meters and Tobogan Waterfall (Cascada El Tobogan) 15 meters. The El Oso Route has a cave and waterfall to see! El Oso Cave (Cueva El Oso) is around 50 meters deep and is a place you can observe reptiles and other animals of the forest while El Oso Waterfall has a drop of 35 meters. The Cave Circuit has a couple of caves to see! El Masharo Cave is 40mins from Yantzaza and is 65 meters deep. The other cave El Laberinto is nearby. The La Misteriosa Route has 3 waterfalls to see! La Misteriosa o Grunona Waterfall has warm waters with a drop of 30 meters and is where the Shuar people performed religious ceremonies and is a good place to take a refreshing swim. Bano de Hombre Shuar Waterfall is 21kms from Yantzaza where you must walk along a bush track for 1hr to reach the waterfall. The 3rd fall, Bano El Escondite Waterfall is located between the 2 previously mentioned waterfalls. The Duende Circuit has 6 waterfalls (La Pileta, El Reflejo, La Visera, El Arcoiris, Las Escalinatas and El Bloque) and a natural jacuzzi to enjoy, it's located 40mins from Yantzaza! The Don Viche Circuit has another 4 waterfalls. They are La Maravilla Waterfall with a drop of 30 meters, El Descanso Waterfall has a 20 meter drop and warm waters for swimming, Feliz Aventura Waterfall has a drop of 20 meters but has 2 levels, Las Bromelias Waterfall has a 5 meter drop and is a place with an abundance of flora and fauna.

From Yantzaza I continued traveling up the Oriente Road. Firstly to Gualaquiza (1hr 40mins) for just a few hours where I saw some of the activity surrounding the Sunday market in the center of town and then I continued north to Limon after hitching a ride in a truck (1hr 45mins).

Yantzaza in the jungles of Ecuador with the Zamora River & Rica Beach. Footbridge over the river to the beach from the town. Yantzaza is 90mins bus north of Zamora & is one of the small towns on the Oriente Road north to Puyo! #Travel #Ecuador #river https://t.co/jcPK7K0Sef pic.twitter.com/4NeILM9Hs8


View all photos in the Yantzaza Photoset

Hotel Paraiso, Yantzaza, Ecuador (October 2018 - 1 night) - Located on the corner of the plaza in Yantzaza. $18 for a small room for 2 people with private bathroom. The building has a strange design making the rooms slightly un-private, the window in the room opens out to a common patio and so does the room opposite making it kind of strange to see reflections of people in your window, weird!
Ecuador Travel Blog | Photos of Ecuador | Festivals in Ecuador | South America Videos 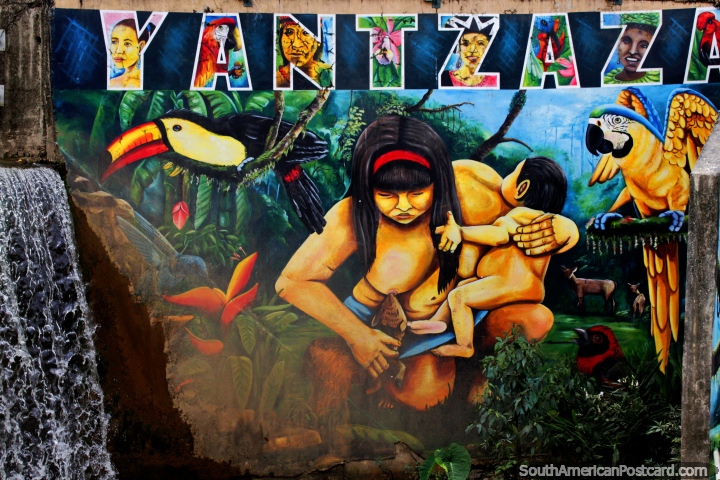