Tulcan, Ecuador - Have Been Here A Few Times For Border Crossings 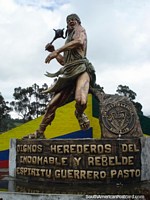 Man with club monument in Tulcan. 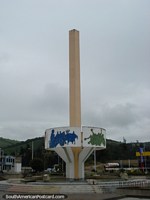 Monument a few kms before Tulcan. 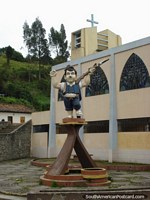 Little man with a gun monument beside church in Tulcan.

Man with hat leans against a post on a Tulcan street.
Map location: Tulcan, Ecuador

I arrived in Tulcan in the late afternoon from Ibarra where I had spent part of that day. I found a cheap hotel across the road from the bus terminal for about $8USD. I noticed pretty early that the tv plug in the wall had exposed wires and I should be really careful when plugging my camara charger in right beside it. I needed a shower after such a long day and after I ventured out as it became dark to find some food, I settled on some freshly spit roasted chicken. It came with rice, a potato, salad and chicken foot soup. I went back to the hotel to sleep for the night. I wanted to have a quick look around Tulcan in the morning before going to the border of Colombia.

Early in the morning I caught a bus 4 or 5kms back out of Tulcan, hopped off and then proceded to walk back into town while taking a few photos of some of the things I had seen when I arrived on the bus the evening before. Some of the monuments and things that I like. The first thing I found was this round and colored thing that had pictures on 5 different colored faces and has a tower thing in the middle. On the left side of the road as I walked is a church. To the side is a monument of a funny little man with a hat and mustache holding a gun up in the air. The church has large stained glass windows on the sides and a smaller round one at the front along with a big arched doorway. A horse and cart went by. I stopped for a drink then came to a huge picture of a military scene outside the army headquarters. I wandered in. I wanted to take some photos of a statue that I saw inside. I did but then an army guy told me I wasn't allowed in there and I left. Outside is a huge bronze warman figure with a club, underneath it says Dignos Herederos del Indomable y Rebelde Espiritu Guerrero Pasto which roughly translates to Untamed and Worthy Heirs of Rebel Spirit. I walked on for a while and when I got very close into the center I came to a big traffic roundabout that has 3 male figures spaced out around the perimeter. One is of a man in red shirt and yellow boots holding a big plow tool, another is a man dressed in blue and green with a spade and cement and the other is man with an orange wheelbarrow. I passed another church and came to another smaller roundabout with monument in the center very close to the bus terminal of a man and woman holding up a torch. It is to pay homage to the people, men and women of Tulcan who faught for democracy on the 26th of May 1971.

Just a short distance away near my hotel I sat down at a restaurant and had breakfast which was the standard meal you get in Ecuador at any time of day - meat, rice, potato, salad with a fried egg on top along with a bread roll, coffee and juice. It was a good filling meal before I collected my backpack and things from my room and took the short 6km ride to the Colombian border of Rumichaca and up to Ipiales. The border controls for both Ecuador and then Colombia are very straight forward and Ipiales is only 3kms away. Continue reading about crossing the border to Ipiales.


View all photos in the Tulcan Photoset

Hotel Eva, Tulcan, Ecuador (July 2012 - 1 night) - Small basic room with bathroom and tv at a good price. Located up behind the bus terminal and cheaper than the others. Recommended.

Hotel Las Acacias, Tulcan, Ecuador (May 2010 - 1 night, July 2011 - 1 night) - A small room with bathroom for $8USD, it had a tv but the plug into the wall was dangerous with wires exposed. It's right across the road from the bus terminal and next to a bunch of restaurants, fine for a one night stopover.
Ecuador Travel Blog | Photos of Ecuador | Festivals in Ecuador | South America Videos 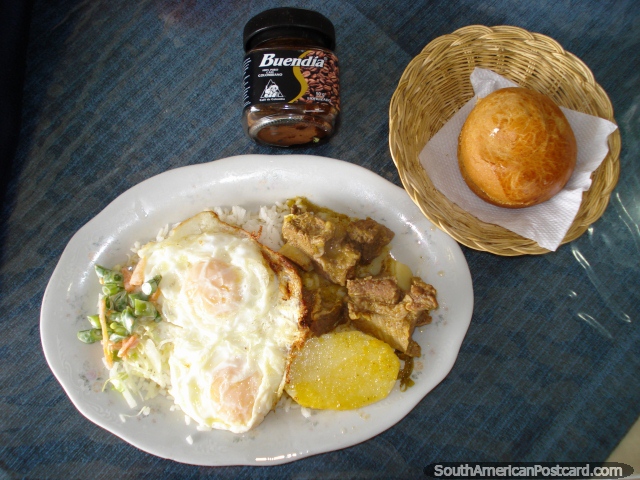