Cuenca, Ecuador - Pristine Colonial City (UNESCO) With Many Things To Do

A pair of church towers, a typical sight in Cuenca - Iglesia de Cenaculo.

The walls, dome and ceiling of San Blas Church in Cuenca.

Your eyes will be open wide with amazement when you see the colonial center of Cuenca, that's why it is listed as a UNESCO World Heritage Trust site! The city is clean and tidy with cobblestone streets, many historical buildings and churches, fabulous plazas and open spaces, cool graffiti art and is a photographers paradise to say the least. The airport is right in the center of town because there are no high-rise buildings to be found anywhere in the city - that makes for one nice uncluttered cityscape to enjoy!

I arrived in Cuenca by bus from Alausi - 3hrs 40mins through typically green and beautiful Ecuadorian countryside. This was my 2nd time in Cuenca. I had spent a night and had seen some of the city a few years earlier after arriving from Puerto Lopez on the coast, this time I was really going to explore.

On foot is the best way to explore a city of course but you can also take a bus tour with Van Service to get an idea of the city's layout beforehand. The bus circles Parque Abdon Calderon (the central park beside the cathedral) every hour throughout the day.

The best way for me to describe Cuenca is in terms of shapes, forms and textures, so here we go. Beautiful facades with arched windows, tiled roofs and wrought iron balconies with bright colored flowers, cobblestone plazas surrounded by and streets lined with these buildings, streetlamps that compliment the surroundings in a beautiful way, doors and windows with interesting designs, stone and brick walls, steeples and domes lining the skyline, fences and gates that add to the facades, great stone staircases leading from the city down to stone bridges to cross the river, tree-filled parks, clean air and open spaces...

Cuenca is a lively place with its student population, it is known as the city of universities because there are at least 4 here. It's busy at McDonalds beside Parque de la Madre where the students all hang out. I believe the nightlife and entertainment is pretty good too!

Food in the City

The central city has many restaurants and cafes to eat at, upmarket, mid-priced and cheap. At night they cook guinea pig in some plazas as a fastfood meal, but I've never had the enthusiasm to try it!

The City is the Monument

What makes Cuenca very different from other cities is the lack of statues, busts and monuments everywhere which makes a nice change. They don't need them, the city itself is the monument. If you have ever been to, for example Buenos Aires in Argentina, you will know that there are way too many statues and busts everywhere = bronze overkill.

For panoramic views of Cuenca, take a walk up to the Santa Ana Terrace on the roof of the cathedral, the stairs are inside the cathedral. You can also see much wider views of the city from Turi which is the hill that Van Service take you up during the city tour. Take your pick, they are both worth a look!

I set out to photograph Cuenca in a way that would be different. Different for me and different from other people. I spent 3 days walking around looking for as many sights and nooks and crannies as I could find and I got to know the city pretty well in this time, that's for sure. If you are a lover of fine colonial cities with amazing and well-kept architecture, then Cuenca would have to be at the top of the list if you are visiting Ecuador. Cuenca is a fraction of the size and hassle of Quito and is also much safer, you can't go wrong! Enjoy your visit or maybe you will be one of the many foreigners who come to live and retire here!

From Cuenca I flew up to Quito (45mins) and headed 2hrs south to Latacunga and Pujili by bus. The first time I was in Cuenca I headed south by bus through Loja to Macara.


View all photos in the Cuenca Photoset

Hotel Norte, Cuenca, Ecuador (July 2015 - 4 nights) - This hotel is like a big crash house full of rooms. They are not fancy but have a tv, bathroom with good hot water, wifi and it's close to the historical center. You can pretty much do what you want here, ie. smoke. The bed was not overly comfortable but I stuck it out for 4 nights without wanting to leave. $10USD is a good price for central Cuenca. Recommended if you are on a tight budget. Take it or leave it, it's up to you! 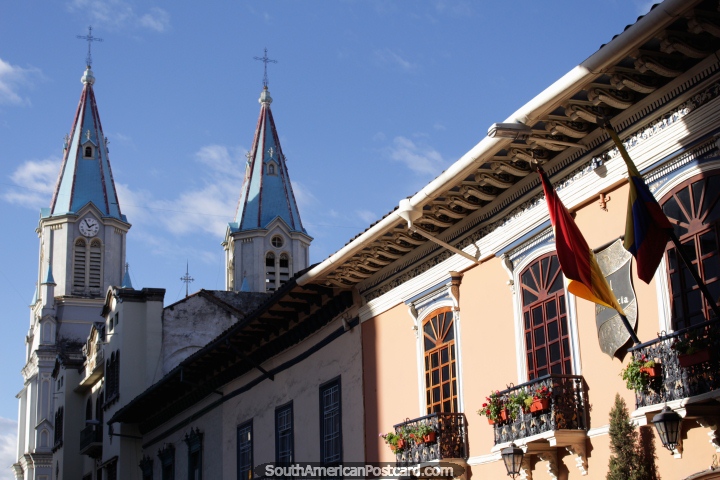