Riobamba, Ecuador - Best City In The Mountains Between Quito & Cuenca

Beside Plaza Roja de la Concepcion in Riobamba, where they sell cloths.

Man on a bicycle rides past a blue and white wall in Riobamba.

An angel baby, part of the Neptune Fountain at Plaza Sucre in Riobamba.

Riobamba, just under 4hrs south of Quito or 1hr 20mins south of Ambato by bus, is a city worth spending a day or 2 in to enjoy the sights and also the views of the mountains around it.

The city has plenty of colonial architecture, nice plazas, a bunch of museums and fascinating markets. Riobamba is the best big city in the mountains to visit between Quito and Cuenca! From the bus terminal I walked a good 20mins towards the center of town and checked into a hotel directly opposite the train station. They do have taxis in Riobamba, it's just that I like walking! From here I was close enough to explore the whole city and also near to 2-3 Chinese restaurants.

Plaza Sucre is the main and most central plaza in the city, this is the best place to start getting to know Riobamba and work your way out from there. Plaza Sucre is dominated on one side by the monumental green building with magnificent architecture, the national college - Colegio Nacional Maldonado, built from 1921 and inaugurated in 1927. The plaza has beautiful gardens, the Neptune fountain and other well-kept historic buildings all around.

2 blocks away is park Parque Maldonado, another equally handsome part of the central city. This is where the stone cathedral is found.

The cathedral is constructed from the rocks of the original that was destroyed in the 1797 earthquake.

3 blocks from the cathedral is Parque La Libertad (Liberty Park) which has an impressive domed church on one side (Basilica del Sagrado Corazon de Jesus).

From Liberty Park I walked to (market) Mercado San Alfonso which has a nice old church opposite, there are churches everywhere in Riobamba. At Plaza Roja nearby are the art markets which also has cloths, hats and shawls for the cold climate at night.

I explored while I made my way to the train station to enquire about trains, particularly the Devil's Nose Ride from Alausi. Did you know that the train system runs from Quito all the way south until around Alausi, then turns west to Guayaquil? There are trains in the north around Otavalo and Ibarra also. There are around 8 excursions you can take including trains to lakes, volcanoes, ice, ancestors, devils nose, inca and the 'sweet train' (sugar-cane and cocoa plantations and rice paddies). The Tren Ecuador website has all the information and on Facebook too!

Outside the train station is Plaza Alfaro where the tracks run straight through the middle of it. In the late afternoon not far from the train station I walked up the small hill beside church San Antonio to the park Parque 21 de Abril. This park is at the top of a staircase that has a grand tiled mural at the top featuring Liberator Simon Bolivar (1783-1830). Late afternoon is a great time to get views and photos of the city and mountains around the city apart from the prize jewel Chimborazo Volcano which is north-west of Riobamba and this is where the sun sets. I came back before 8am the next morning and got a fantastic view of Chimborazo on a clear sunny day! I spent the rest of this day exploring places not so central in the city, walking of course, kms and kms. The Plaza de Toros (bullfighting), street art and murals, statues and busts, cultural bits and pieces, Plaza Guayaquil, historic facades, people... There are views from many parts of the city of a snow-capped mountain in the background.

I enjoyed Riobamba a lot from a photographic perspective and also as a nice place to just hang out and enjoy. Early the next morning I took a taxi to the bus terminal (I was tired of walking) and headed south 35mins to Colta to see the lagoon for an hour then continued another 1hr 25mins further south by bus to Alausi.


View all photos in the Riobamba Photoset

Hotel El Libertador, Riobamba, Ecuador (July 2015 - 2 nights) - Heated rooms and very hot water, that's the ticket. $20USD per night. Located directly across the road from the train station and near to all the historical sights in the city. Tv, wifi and friendly staff. I was comfortable and happy here during my stay. Recommended.

Hotel Imperial, Riobamba, Ecuador (Jun 2009 - 1 night) - Not a very nice room, had 2 broken windows and the owner barged into my room and asked for payment, not recommended.
Ecuador Travel Blog | Photos of Ecuador | Festivals in Ecuador | South America Videos 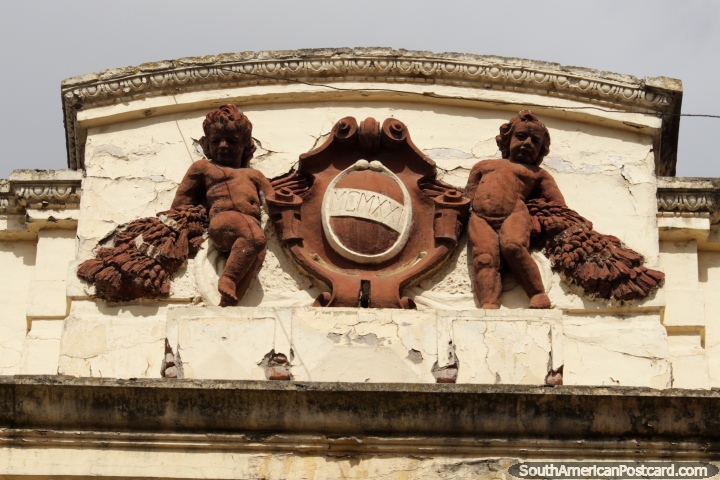