Latacunga, Ecuador - A Mini-Quito With Many Historic Buildings 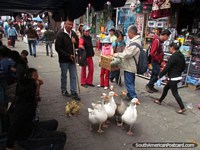 Geese and chicks walk along the footpaths in Latacunga. 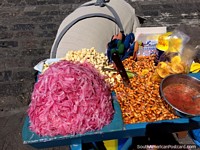 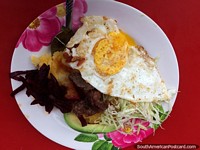 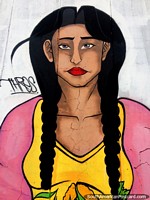 Street art in Latacunga in the park below the bridge, woman in yellow and pink with long hair.
Map location: Latacunga, Ecuador

Latacunga has a gem of an historic center that most backpackers miss because it is on the other side of the bridge from the bus terminal. I had missed it on my 1st 2 visits to Latacunga when I stayed across the road from the terminal before and after visiting Quilotoa Laguna in 2009. In 2012, 2015 and 2018 I returned and stayed each time a couple of nights to explore the city, there is a lot to see and Latacunga is kind of like a mini-Quito. It had been a long 9hrs by bus from Portoviejo to get to Latacunga this time - through the towns of Chone, El Carmen, Santo Domingo and Machachi.

If you are on a budget the best bet for cheap hotels is around the bus terminal, it's a 5min walk across the bridge to the historic center, but the prices of hotels are a lot higher.

The main square called Parque Vicente Leon is right in the heart of the historic center. It's a big octagonal shape with palm trees and flower gardens and is dominated by the huge monument in the middle of (you guessed it) Vicente Leon (1773-1839), a local philanthropist. On one side of the park is the great white cathedral, it has been rebuilt several times along with the city after earthquakes in 1742, 1768 and 1877. Just 2 blocks south from here is church Iglesia San Agustin, the Plaza of Culture (Plazoleta de la Cultura) and the historical Hermanas Paez Hospital - a nice area to explore. A couple of blocks east I found another interesting building - the Army Polytechnic School (Escuela Politecnica del Ejercito) with courtyard, gardens, fountain and bronze head of ex-President General Alberto Enriquez Gallo (1895-1962).

Walking south-east towards park Parque Nautico la Laguna, I came to a monument of the main character from the famous Mama Negra Festival (a man dressed as a woman on a horse). The festival is held in Latacunga twice a year. As I got to the lagoon there was another monument of a character from Mama Negra, also on horseback. The lagoon is quite big, you can hire a dinghy and paddle around. The tourist office is located across an arched bridge in the middle of the lagoon, there is also a small kiosk that has maps of the city. Near the park are some markets and a pink church with a big belltower and a shrine "Jesus del Gran Poder" at the bottom. To the west is a monument of Atahualpa (1497-1533) - the last emperor of the Incan Empire.

At this point a street celebration erupted with a marching band, costumes, colorful dress and religious symbols. I followed the procession for a while taking photos along the way.

Park Parque la Filantropia, a nice place with trees, palms and flower gardens. The central two-sided monument pays homage to Senora Dona Maria Elvira Campi de Yoder - a local who founded the Red Cross and Rafael Cajiao Enriquez - 5 times Mayor of Latacunga. As I walked back towards the bridge I saw a typical monument of Ecuador in a small park - an indigenous woman sitting down with vegetables to sell. You see these characters everywhere around the country, I love them!

Right where the bridge is you will see Church El Salto, there is a lot of activity around here with markets, street vendors, shops and traffic. I could see in the distance a monument and further up the street another, this is Av. Amazonas. I decided to investigate. The first is a soldier with red hat, blue shirt and white pants holding a flag, next is the angel of the stars on a white horse, thirdly is the captain in a yellow suit and mohawk hat holding a sword, these are all characters from the Mama Negra Festival. At the Cotopaxi Air Base, there is a fighter plane monument and a statue in respect of the pilots.

The huge white church Iglesia de Santo Domingo - domes, towers, columns. The grey stone brick church Iglesia San Francisco and Plazoleta Simon Bolivar featuring Bolivar on his black horse. Across the road is the shady park Parque San Francisco. Along the cobblestone streets with their colorful buildings is the interesting looking white church Iglesia de la Merced with its intricate designs and shell-like arched doorway. San Sebastian is the next church I found. That's why I say Latacunga is like a mini-Quito, because of all these churches. A walk over the bridge across the Cutuchi River opens up views in the distance of the Cotapaxi Volcano covered in snow.

I headed 2hrs north to Quito for the night from here (89kms).


View all photos in the Latacunga Photoset

Hostal Plaza Real, Latacunga, Ecuador (July 2015 - 1 night, October 2018 - 1 night) - Cheap and nasty dive near the bridge on the city side. A rent by the hour type of place so people were ringing the bell all through the night. Wifi worked in my room because it was right next to reception but for that I had lots of noise. The rooms upstairs have no wifi signal. Cheap at $8USD but I could never recommend this place for any reason. The bed was uncomfortable and the bathroom sink leaked water on the floor. Spend a few more dollars and sleep somewhere better! I came back and stayed here in 2018 and found it a lot better, must have been the room, this time it was quite a large room on the top floor, the wifi did work and there were no problems with noise, the hostal is located on the street beside the market building and commercial center in Latacunga. I paid $15USD for 2 people.

Hotel Cotopaxi, Latacunga, Ecuador (July 2012 - 2 nights) - This is a nice hotel overlooking the main plaza in Latacunga. I got a great price, something like $20USD per night, all the mod cons are here. It's located in the historical center.

Hostal Pillarenita, Latacunga, Ecuador (Jun 2009 - 2 nights) - Nice little rooms with tv on 2nd or 3rd level with street views, shared bathroom, it's opposite the bus terminal for buses for the Quilotoa loop, I stayed here before and after Quilotoa.
Ecuador Travel Blog | Photos of Ecuador | Festivals in Ecuador | South America Videos 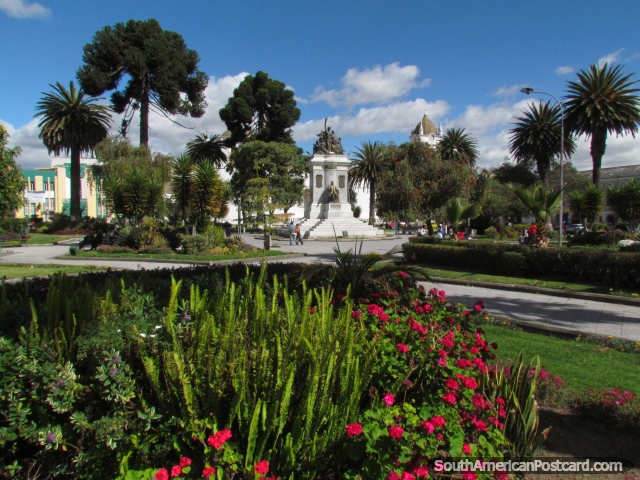