Huaquillas, Ecuador - This Border Crossing Is A Big Hassle

Crossing the border from Aguas Verdes north of Tumbes (Peru) to Huaquillas was my first experience in Ecuador. I immediately encountered a busy main street with all kinds of things for sale including apparel, fruit and drinks. I headed to Machala for the night.

The second time I crossed from Tumbes to Huaquillas nearly a year after the first was very hectic indeed. After making my own way to border control a few minutes before the actual border, I was taken by a mototaxi to the border but down a side lane to the right of the main street. 2 men then told me they would be my security guards through the crowded and dangerous markets between here and the bus. Along the way we stopped at a fake policeman who looked through my passport but I gave him no money. We continued through the busy markets to the right of the main street, it certainly would have been very dangerous by myself. When I got to the bus the 2 young men wanted payment for their service. I told them I had little money but gave them a few dollars. But do not fall for this trick, get out of your mototaxi before it veers right at the border gate. This time I took a bus to Guayaquil bus terminal and then another throughout half the night up to Portoviejo.

The third time I crossed this border was in 2012. This time I had big hassles with being allowed an entry stamp because the year before I had exited Ecuador at La Balza with my old passport which was not with me, that wasn't the main problem though. The problem was that La Balza is not in the system so there was no record of me exiting Ecuador the year before. I had no option but to spend half the night in Huaquillas trying to sort it out which never happened. I was in Ecuador illegally. At around 3am I took a bus north for 4hrs 30mins to Guayaquil and went straight to the immigration office opposite the bus terminal. This office is amazing, full of young happy police and immigration officers, so unlike the grumpy old men at the Huaquillas office. After comparisons between my new passport and my girlfriends, as well as various comparisons in the system, it was deemed that I did actually exit Ecuador at La Balza on the specific date the year before. I was now granted a visa and my La Balza exit was added to the system! I spent the night in Guayaquil.

In 2012 the border control office in Huaquillas was moved to another location and you must now take a taxi for about 5-10mins to get an entry stamp, then you must get a taxi back to town for buses to other cities. What a big hassle and drama they have turned this into. I dislike this border crossing very much! 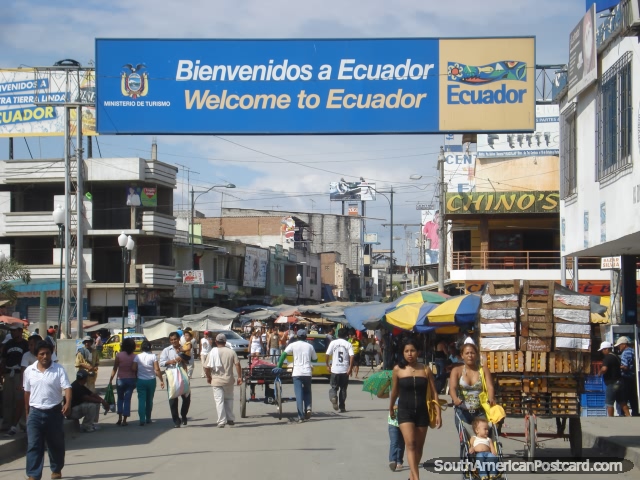