Loja, Ecuador - Things To Do & See In Ecuadors Music Capital

Symmetrical windows and the colored balcony of the government building in Loja.

The tower at the city gates in Loja, built by the order of King Felipe II of Spain.
Map location: Loja, Ecuador

Loja has a long history and because of this there are many things to do and see in the city. I've stayed in Loja 2 times now. The first time I had traveled down the Oriente road through the jungle regions of Ecuador and Loja was the first big city I had visited since Quito a week earlier. The 2nd time, I arrived from Zaruma towards the west, 5hrs 45mins by bus. Loja has some nice parks, plazas, historical areas, galleries, museums and monuments. It is known as Ecuadors music capital. I've spent several days exploring the cities sights.

Jipiro Recreational Park is full of life-size replicas of famous buildings from around the world including Asian arquitecture with dragons, an Indian temple Templo Indomalaico, the Cathedral de San Basilio Moscu of Russia, the Eiffel Tower of France and on the island in the lagoon Big Ben Tower of London. A range of bird species can be spotted in the park including Golondrinas, Carpinteros, Tordos, Atrapamoscas, Sucaca, Mar Arita, Garza Gris and Suipe. Other recreational activities at Park Jipiro include horse riding, a skateboard bowl, pedal boats and tennis. A plane and train are on display also. Jipiro Park is quite near to the Loja bus terminal where also there is a monument of Isidro Ayora Cueva (1879-1978) - a former president, the awesome musical bridge and a gold military monument.

Near the river is the city gate, a big castle and bridge. There is an art gallery here that displays some fantastic wooden sculptures. Across the road from the castle and city gates are 2 huge murals, one is of Antonio Jose de Sucre (1795-1830), he was a Venezuelan independence leader and good friend of Simon Bolivar for whom the other mural is of.

Plaza Bolivar is a good place to sit down and have some lunch. The monument to Bolivar is quite spectacular with its 6 white columns and surrounding palm trees. Plaza de la Independencia also known as San Sebastian Square is dominated by a 32m high clock tower and church Ministerio Parroquial de San Sebastian. Down the road a little is a small park that has several flower sellers and a monument of Dr. Lautaro Loriza. Nearby is an orange church and monument to Mercedes de Jesus Molina y Ayala (1828-1883). Nearby again is Plaza de la Confederacion Santo Domingo with its beautiful church constructed in 1600 and a monument of Manuel Carrion Pinzano, a promoter of culture and education. The museum of art Museo de Arte Laitinoamericano is a cool and colorful building with some very cool and colorful paintings inside!

The Cathedral and Park

The Cathedral of Loja was built in 1890. It has an eclectic style and neoclassical elements and has a German organ brought the same year of its construction. The cathedral stands on one side of a lovely park where people relax beside the trees and gardens, a monument to Bernardo Valdivieso (1745-1805) stands in the middle. Ecuadors oldest college founded in 1856 and located in Loja is named after him.

Museums of Music and Photos

The cultural museum Museo y Centro Cultural is basically a lot of black and white photos showing the history of Loja. Since Loja is Ecuadors music capital I was looking forward to visiting the cities music museum Museo de Musica when it opened up again after lunch. Its a very interesting place with many photos from the 1800s-1960s of local groups and orchestras. The violins and bows of Maestros Manuel de Jesus Lozano and Daniel Armijos Carrasco are on display here. Loja also has a museum of religious art Museo Arte Religioso. Church Iglesia de San Francisco is the next sight in Loja that I saw, it's an impressive structure with its tower, dome and round and arched windows. The monument of a man on horseback is Alonso de Mercadillo, the founder of Loja, Zaruma and Zamora. As I walked back to my hostel at the days end I passed the great white palace of justice Palacio de Justicia, quite something indeed.

I can very much recommend taking a visit to Loja to spend a day or 2 enjoying the history and beauty of the city. My next destination was Vilcabamba, 1hr south by bus.

2009: After 2 hours of walking around Cuenca city it was time to get my backpack from the hotel and take the 5 and a half hour bus journey to Loja where I wanted to get another bus for 6 hours to Macara on the border with Peru by that night. The scenery to Loja was very beautiful with hills and fields, farm houses and small communities and villages such as Al Canton. The bus stopped often to drop off or collect locals. The countryside as usual in Ecuador was an amazing sight to see with all manner of life going on as we passed through. It was a great treat with mountains, country houses, monuments, shrines, crops growing in the fields, locals tending to their animals and produce and lots of open green spaces with trees. Arriving at Loja at around 4pm.

I booked a bus for 5pm to Macara. I had a brief walk out and took some photos of the musical bridge and a few monuments. I had some food and got to my next bus to Macara which would take 6 hours to travel a mere 200kms! The bus south to Macara was a very drawn out process, stopping many times for passengers to get on and off.

But late that night at about 11pm we arrived in Macara where I got some soup, fed a street dog the bones, found a budget hotel and went to sleep. I wanted to be ready to cross the border back into Peru in the morning for another full days travel on my 4 day mission to Lima from Puerto Lopez to get back home to NZ. The border bridge to Peru is only a short taxi ride away from the center of Macara and you can do the border control formalities there rather than go on a wild goose chase in town trying to find the passport stampers. There is not an official money changer on either side of the bridge but I changed some $USD for Soles with the Peruvian border policeman. After crossing the bridge I got a co-op taxi to Sullana.


View all photos in the Loja Photoset

Hostal Gaviota Azul, Loja, Ecuador (October 2018 - 1 night) - Hostal Gaviota Azul is located across the road from Loja bus terminal on the lower corner. A room for 2 people cost $20 and with a private bathroom had the best hot shower out of all 22 hotels I stayed at in Ecuador on this trip! The room had a small balcony overlooking the busy road and crazy traffic roundabout which is quite entertaining. The city center is a couple of kms from here. Recommended. 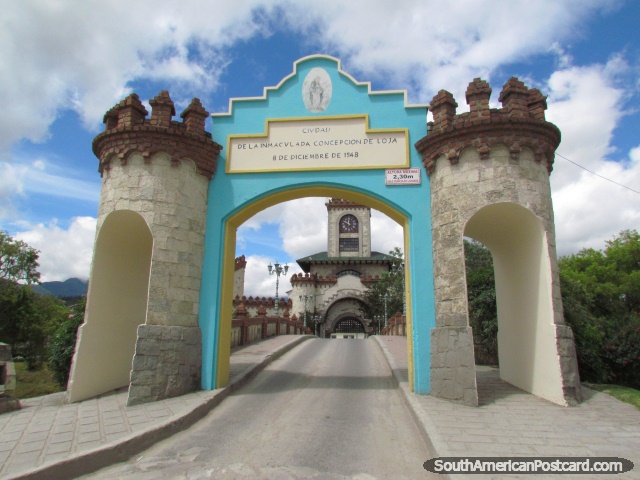