Puerto Lopez, Ecuador - Things To Do Include Whale Watching & The Beach 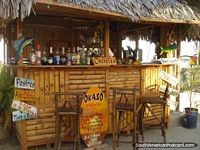 Puerto Lopez has cabanas all along the beach that sell food and drinks. 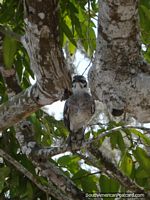 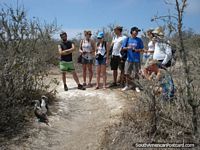 It's possible to get closeup to the birds on Isla de la Plata. 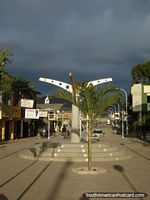 Monument in the square at the south end of Puerto Lopez.
Map location: Puerto Lopez, Ecuador

The overnight bus from Quito to Puerto Lopez left at 7pm and should have taken 11hrs but due to the driver being in rally mode, it took only 9hrs. We arrived at 4am. There were other travelers on the bus and we all sat out on the road for a while waiting for the bread shop to open and to find a place to stay but without arriving too early, so that we wouldn't be charged for the current night. I found a nice hostel by about 5:30am, the cost for a room was $5USD with a shared bathroom or $7USD with a private one.

After a few hours sleep I explored the beachfront street area where there are many cabanas on the beach selling nice food and drinks. They have hammocks and seats under umbrellas in the sand and palm trees. There also are restaurants on the street.

For the next day I planned to go whale watching at Isla de la Plata in Parque Nacional Machalilla. As well as snorkeling and a walk around the island to see the birds and views. I booked a tour with 'Machalilla Tours' on the main street, it cost $30USD plus $15USD for the park entrance fee.

In Puerto Lopez I ate some great sandwiches for breakfast and lunch at the Blue Dolphin cabana beside the beach. I also put an order in for hot garlic prawns for dinner for the following night after the tour.

Boat Tour to the National Park

The next morning, everybody on the days tour met at the office of 'Machalilla Tours' and we all walked down to the boat in the fishermans area and village at the southern end of the beach where pelicans feed on fish and sit on the boats. There was about 14 people in the group and a guide. There was also a guides helper and the boat driver. Unfortunately there was a problem with the English speaking guide so we had a Spanish speaking one. Luckily there was a few multi-linguists in the group to translate. It took about 90 minutes to get out to the Isla de la Plata from the mainland and it was a glorious hot sunny day. We had all age groups in the group, so we split into 2 groups at the island - those who wanted to walk a lot and those who didn't. We were shown a map of the nearly 3hr walk we were about to embark on around the island in which we would see birds such as Albatros, Blue Footed Boobys and Fragata.

Walk Around the Island

The dirt track we walked along and surrounding bush and plantlife was very dry. We started to see Blue Footed Boobys nesting, sitting on eggs or with young chicks and we were able to get very close to them to observe and take photos. During the walk we enjoyed the views of the rocks by the sea, it was so hot but we were able to have a shady rest every 20 minutes in the shelters along the way. Walking was really fun but hard work, we saw many nesting birds and took a lot of photos.

We were now ready for lunch on the boat by the time we got back. We ate some huge tuna sandwiches and biscuits that the tour supplied while we travelled around the island to the area where we would go snorkeling. We snorkled for about 45 minutes in the cool water and saw many colorful fish, sea snakes and other fish. After everyone had dried off, it was time to head back to the mainland while looking out for whales!

The whales are not in full activity in June but we and some other tour boats located a couple swimming along and we were able to get some good views of them appearing, then disappearing, then re-appearing in the water for about 40 minutes or so. We were able to climb up onto the roof of the boat to get a better view and everyone was taking many photos trying to get the whales tail. It was amazing how big they are and we all enjoyed it a lot. It was a great way to end the day before the 1hr+ boat ride back to the fishing village and beach at Puerto Lopez.

Back at Puerto Lopez it was time for hot showers, a cocktail on the beach and to watch the sunset and to look forward to the BBQ garlic prawns for dinner at the Blue Dolphin! I enjoyed the meal a lot and was ready for a night of fun sitting by a fire on the beach drinking cocktails with a small group of people from my hostel and tour. The night lasted to the small hours, cocktails cost about $3.50USD each at the beach bars, but there was so many to try! I tried some juggling on the street with some of the local boys and had a good laugh. By about 3am it was time to go back to the hostel for some well earned sleep.

The next day while the others went to the beach in Parque Nacional Machalilla I wandered down to the fishing village and took some photos of the fishing boats. The fishermen were untangling their nets while pelicans and vultures were eating any spare fish. I spent the rest of the day just relaxing in a hammock, eating sandwiches and using the internet. Later I enjoyed exchanging some photos that I had taken that day with a few people in the hostel and I had a nice dinner and a couple of drinks with my new friends.

It was my last night in Puerto Lopez as I had to head south to get back to Lima in Peru for a plane home 5 days later. I travelled via Cuenca, Loja and Macara.

Bus to Cuenca and Beyond

I wanted to travel to Cuenca via Guayaquil during the day from Puerto Lopez so that I could enjoy the scenery from the bus and stay a night there and have a look at the city. The bus in the morning was to take about 4+ hours to Guayaquil. The bus headed north for a while past the fish markets in Puerto Lopez, then past an early morning soccer game, up the coast and through small towns such as Pedro Carbo. People came onboard the bus with food for sale along the way and people at intersections had things for sale such as kites, drinks and fruit. In Guayaquil I took another bus to Cuenca which lasted about 5 hours. We entered Parque Nacional Cajas and ascended into the cloud forest where the surrounding houses and scenery became harder to see through the white mist. We came out of the cloud forest into an amazing mountainous lake scene while continuing to travel just beneath the clouds for a while, but with the sun in some areas of view. Then finally coming out into green valleys and farming areas and arriving in Cuenca. Coming into the bus terminal in Cuenca I noticed some hotels nearby and walked across the road after arriving and found a nice room with bathroom for $7USD. After nearly 10 hours bus travel that day I was ready for a quick feed next door and some sleep. In the morning I got up early for a walk around the city center. I took many photos of buildings, statues, churches and cathedrals, the clock tower, streets, plazas, the flower market and the delicious sweet breakfast food available at stalls while I walked around the cobblestone streets. Cuenca is a very beautiful city with a lot of tiled buildings and is clean and tidy. It is a modern city and Ecuador's third largest, it has a sizable student base and a happening nightlife. It is surrounded by lovely green hills. From Cuenca I bused south through Loja on my way down to the border of Peru.


View all photos in the Puerto Lopez Photoset

Hostal Fragata, Puerto Lopez, Ecuador (Jun 2009 - 4 nights) - I loved this place, great for beach life, rooms with or without a bathroom, close to the beach, cheap and run by a nice family.
Ecuador Travel Blog | Photos of Ecuador | Festivals in Ecuador | South America Videos 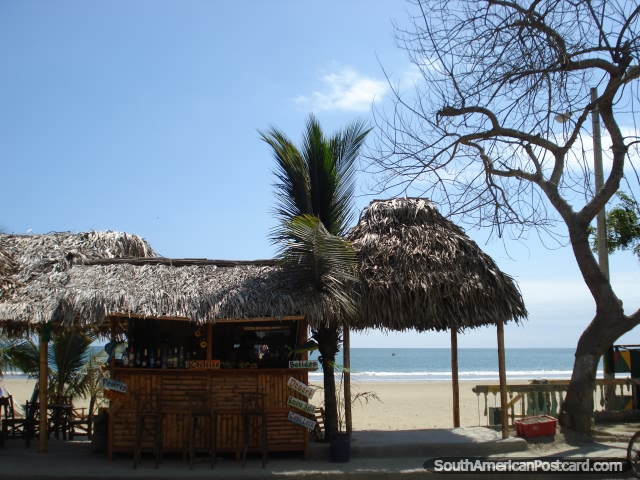