Vilcabamba to Zumba, Ecuador - The Most Remote Border Crossing To Peru 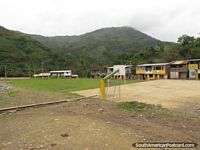 Houses and soccer field in a town north of Zumba. 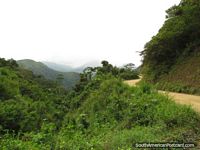 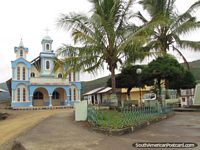 Blue and white church in a park between Zumba and Pucapamba. 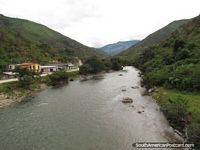 To get to Peru from Vilcabamba there is a border crossing south of Zumba, the bus from Vilcabamba to Zumba takes 5hrs 30mins and then it is 1hr south again to Pucapamba where you cross the bridge to La Balza at the Peruvian border and continue on to San Ignacio. The journey is a pretty rough and wild one but great fun.

Yangana was the first place south of Vilcabamba we passed through, it's around 15kms. From there it is 170kms to Zumba, 65kms to Palanda and 47kms to Valladolid. There are some interesting and tall rock forms on the left side 15mins before coming into Yangana. The town has a nice yellow dual-tower church, also on the left. 30mins out of Yangana the road gets a little rough with some landslip problems, then we climb up to the cloud forest. 40mins later we desend to Valladolid valley.

Valladolid has a big soccer field, some colorful houses and a white and green church. The town sits beside the river just below the cloud forest. We continue on the mud road along the ridges of the jungles hills and valleys. I see a big group of tall and slim palm trees on the left, we cross a bridge over the river and arrive in Palanda 30mins later.

This was an opportunity to get some food to eat, we were here for 20mins. The town has some really nice gardens in the park with bright colored flowers, palm trees and exotic plants. The church is up the stairs behind. In Palanda you can do and see things like visit Park Podocarpus, see waterfalls and caverns and explore some arqueology.

From Palanda to Zumba was the real hard slog of the journey which took 2hrs. A mud road, road problems and men working on the road, the real heart of jungle mountain territory. We did pass through a little village, I think called Chinchipe, it has a cute little yellow and blue church. 20mins later after passing through a military checkpoint we arrived in Zumba.

At the terminal in Zumba there are a couple of restaurants where you can get soup and chicken rice meals. The next bus to the border was 2-3hrs away, my friend and I along with another couple who were also waiting for a bus to the border decided to share a taxi instead, it was $20USD ($5 each).

It took 45mins by taxi to get to Pucapamba where there is another military checkpoint, it's an unpaved dirt road but it wasn't muddy like it had been earlier in the day. There is a little town along the way with a blue church. From the checkpoint it's another 15mins to passport control and the bridge across the river to La Balza.

In La Balza (or Balsa)

We had to go to the policemans house in La Balza to get passport stamps because he was having lunch, then we had to go to another place down the road to get the backpacks checked. We spent 1hr here sorting that out before all sharing a taxi 1hr 20mins to San Ignacio.

Please note: La Balza is not in the immigration offices system, which means if you enter Ecuador again in the future you will have problems if you do not carry the passport with the La Balza stamp with you. This happened to me when I re-entered Ecuador at Huaquillas nearly 1yr after exiting at La Balza. I got it sorted out but only after a lot of hassle. If you enter Ecuador at La Balza, I would go to an immigration office in a city as soon as possible and get it put into the system.


View all photos in the Vilcabamba to Zumba Photoset 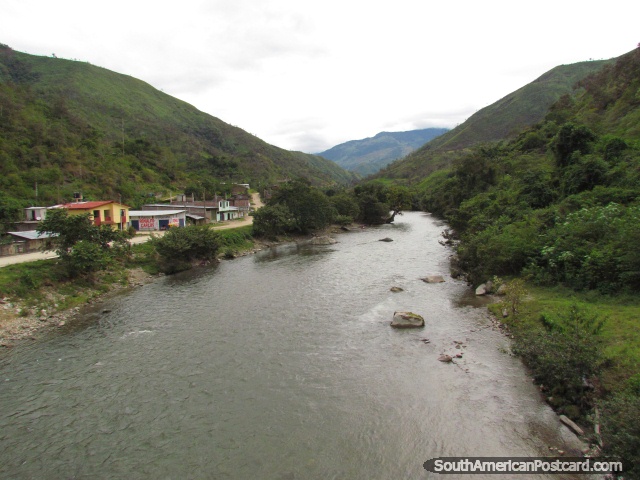