5 figures of children, part of a monument near Fort Zeelandia in Paramaribo, Suriname.

A group dressed in army design clothing at the Avondvierdaagse parade in Paramaribo, Suriname.

Of the 3 capital cities in the 3 Guianas - Paramaribo, Cayenne and Georgetown, Paramaribo is definitely my favorite! Why? For many reasons including the historic center, the friendly people, the interesting things to see and because I just happened to be there during the 4 day annual parades in April called Avondvierdaagse. I was also extremely lucky to get into the tv crew and photographers area on the street between the crowds to take some exciting photos of all the action that went down!

I arrived in Paramaribo from the eastern border town of Albina, a 2hr ride in a shared taxi-van costing $20euros.

It was mid-afternoon and I headed out to have a look around this former Dutch colonial town built in the 17th and 18th centuries. My guesthouse was not far from the historic center. Around the St. Peter and Paul Cathedral is a good place to start. They say the cathedral is the biggest wooden structure in the Western Hemisphere. Outside is an artwork called 'Vrede en alle goeds', (Peace and all good). Nearby is the hospital St. Vincentius Ziekenhuis, a building with many arches, columns and 4 statues at the front of the facade. Around the corner is St. Elisabeth School and the Osterreichisches Konsulat, big wooden buildings. Paramaribo is full of old large wooden buildings.

I Need Permission to Make Photos?

I came to a statue of Julius Caesar de Miranda (1906-1956), a local lawyer and politician. As I was taking a photo of it a man came up to me and said that here I needed to ask before taking photos. I told him that I had asked the statue if it was ok to take a photo and that he had replied yes. The man said ok and walked away!

I now came to a park called Palmentuin (Palm Tree Garden), this is a place with 1000 very tall palm trees all close to each other. Palmentuin is the only public park in the city and has quite a history attached to it including being a spiritual place for shamans to address their forefathers. Nearby are busts of Meester George Henry Barnet-Lyon (1849-1918), a Dutch lawyer and Mr. Lachmipersad Frederik Ramdat Misier (1926-2004) - 3rd President of Suriname. This whole area is the oldest and most historical part of Paramaribo.

Well Blow Me Down!

Suddenly the day changed! I just happened to be right where the parade of 100 groups started streaming along the streets near Onafhankelijkheidsplein (Independence Square). I swear I knew nothing about it. I asked someone and learnt that it was day 3 of Avondvierdaagse and that the next / last day would be even bigger! The last time this happened to me was in Huamachuco - Peru in 2011. The next couple of hours I enjoyed a lot. I discovered how beautiful the people of Suriname are, their chocolate colored skin, their bright colored costumes and cloths - the women, the men, the kids, everybody. They were a great bunch of people and I felt very welcome with many of the performers smiling for my camera. What a fantastic afternoon it was and right out of the blue! I got even luckier the next day - I'll get to that.

Next morning I went out to really walk around the city and see all I could before the last night of parades started in the late afternoon. I enjoyed the architecture, the long streets of wooden structures, all the sights around Independence Square which included the clock tower, the prominent statue of Johan Adolf Pengel (1916-1970) (4th Prime Minister of Suriname) and Jagernath Lachmon (1916-2001) (a Surinamese politician of Indian origen). The buildings around the square include the impressive Presidential Palace. Near the square towards the water is Fort Zeelandia with a few ruins, nice plaza, lots of statues and monuments, nice wooden buildings and views of the bridge from beside the river. There is a special monument of Baba and Mai which celebrates the Indian laborers and immigrants who helped develope Suriname. Another monument pays homage to the Surinamese veterans of the Korean War.

From here I walked in the direction of the port, markets and rougher city streets. Images of Bob Marley I saw a lot around Paramaribo. The rougher parts of town always draw me. I find all kinds of interesting things in these places, street art and interesting people too.

Afterwards back in the center I saw the large fountain with a monument of bronze people within it. Up the road I visited the well-known sight of the Neve Shalom Synagogue right beside the Keizerstraat Mosque, both are stunning looking buildings. From here I explored various streets and found many statues and old houses. Back in the center near the fountain I saw the Centrumkerk, an octagonal white church built in 1833 with a bust of Simon Bolivar beside.

I walked in the direction of where I believed the parades would be starting. I could see groups of people and families walking with purpose in a particular direction. Again I took photos from the side of the road with the crowds of people for a while until I got a glimpse of other photographers and tv cameras on the road up beside the main stage. I asked a security guy if I could be up there with them, he took me to another security guy and asked him and they said yes I could go! It was a great experience to be in this position as a backpacker and avid photographer. I really felt like I was with the band, you know? The Suriname people really know how to put on a fun parade full of action, hot ladies (and guys), colorful costumes, excitement and happiness! I even got a photo of the President and First Lady at the end of the show.

I Need Some Maccas

At the end of the night I headed for McDonalds for the 4th time in 2 days and ate 2 more burgers. In 2 days in total I ate 7 McDonalds burgers. I was fine up until those last 2 but later that night I paid the price. It felt like a rock in my stomach and I didn't feel at all well, it took some hours for me to feel better, don't do it!

The next day I decided to take a taxi to the Neotropical Butterfly Park on the city outskirts. I payed the driver $110 Suriname dollars ($33USD) to take me there and back including waiting for me. The entrance fee was $35 Suriname dollars ($10USD). I thought it was ok but it wasn't anywhere near as good as the Mariposario Butterfly Garden in Mindo - Ecuador.

On the way back into town the taxi stopped for a view of the biggest Hindu temple in Suriname - Arya Dewaker. Then I ate yummy Chinese food for lunch!

I loved my time in Paramaribo and look forward to my next visit soon. Next morning from Paramaribo I took a shared taxi-van 4hrs 30mins west to Nickerie near the border of Guyana and stayed the night there.


View all photos in the Paramaribo, Of Dutch History & Language - Suriname Photoset

Greenheart Hotel, Paramaribo, Suriname (April 2015 - 3 nights) - The Greenheart Hotel is a fantastic place to stay in Paramaribo at around $49 euros per night for a private room with a couple of fans, wifi and bathroom. The hotel has a swimming pool, a bar and a restaurant. The staff were more than friendly, they were like friends and very helpful indeed! It's a very social place also. The price includes the most awesome breakfast you could ever wish for! Coffee, fruit juice, bread rolls, toast, boiled eggs, ham, chicken, salami, cheese, fruit and cereal. What more could you want to begin your day, utterly fantastic! Run by nice Dutch people and located near the central historical area. Double recommended.
3guianas Travel Blog | Photos of 3guianas | Festivals in 3guianas | South America Videos 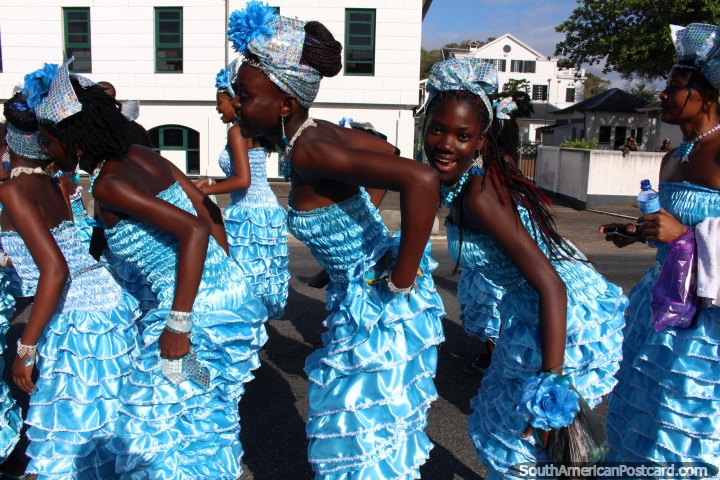