Posadas, Argentina - Points Of Interest & The Bridge To Paraguay

Fantastic pink, blue, purple and red lighting of the government building in the main plaza of Posadas at night.

Plaza down by the river in Posadas with a monument of the pope (John Paul II).

2016: This was my 3rd time in Posadas. I arrived at 5am after 8hrs on a bus from Concordia southward on the border of Uruguay. I spent the night and had a decent look around town. It's a pleasant city but there is not that much to see, it's a good place for shopping and eating in my opinion.

Plaza 9 de Julio has the best sights surrounding it - cathedral, fountain, historic buildings, various artworks and the government house. The other main plaza is Plaza San Martin featuring a statue of San Martin on his horse. You have to really wander around the streets in the center to find the other occasional things of interest. I only found a few historic buildings, wall art and statues and monuments.

Waterfront and Bridge to Paraguay

Apart from a few things around the center of Posadas the real main attraction is the waterfront and the bridge to Encarnacion - Paraguay. Walking along the waterfront is nice, there are restaurants and bars, a train station with trains running between Posadas and Encarnacion, an open air theatre, a giant monument and of course beautiful views.

One night in Posadas was perfect and from here I bused 5hrs and 10mins west to Resistencia.

2012: I passed through Posadas again in 2012, 4yrs after the first time. I had spent all night traveling up from Tacuarembo in northern Uruguay, through the corner of Brazil and up to Posadas. I didn't stay in Posadas this time, I caught a bus straight across the bridge to Encarnacion for my second time in Paraguay.

My First Time in Posadas

2008: I came to Posadas from the border town with Brazil called Paso de los Libres and spent a few nights here. It was during easter weekend and things were a bit quiet around town. There are lots of shops and nice restaurants, bakeries, ice-cream parlours, lots of families out and about, jugglers, clowns, buskers and jewelry salesmen in and about the plaza. It's a pleasant place to walk around in. I took a stroll down to the Rio Parana and had a look across to Paraguay, it is extremely hot here in the month of March. Trucks, cars and vans were going back and forth across the bridge carrying goods. Posadas is a nice place to stay in on the way to or from Iguazu Falls which was where I was going. There are a couple of museums in town also. Apart from Encarnacion, buses go north to Iguazu which takes 5 - 6hrs, west to Corrientes and Salta and south to Buenos Aires.


View all photos in the Posadas Photoset

City Hotel, Posadas, Argentina (April 2016 - 1 night) - Located beside the main plaza in the city but expensive at $30USD considering there is not much to see in Posadas. But cheaper than some other nearby hotels. I had a room with 2 single beds and private bathroom, a double bed would have been nice at that price. 9th floor view of the city and better places across the river in Paraguay (Encarnacion).

Residencial Misiones, Posadas, Argentina (Mar 2008 - 3 nights) - Run by helpful older and younger people, 3 minutes walk to the center, has a sunny courtyard, a lounge and tv area with couches, a big kitchen at the back, a wind up clothes line. The rooms are fairly average but adequate and have bathrooms. I found a small snake about 1 foot long crawling in the shower one night and had to ask the doorman to remove it.
Argentina Travel Blog | Photos of Argentina | Festivals in Argentina | South America Videos 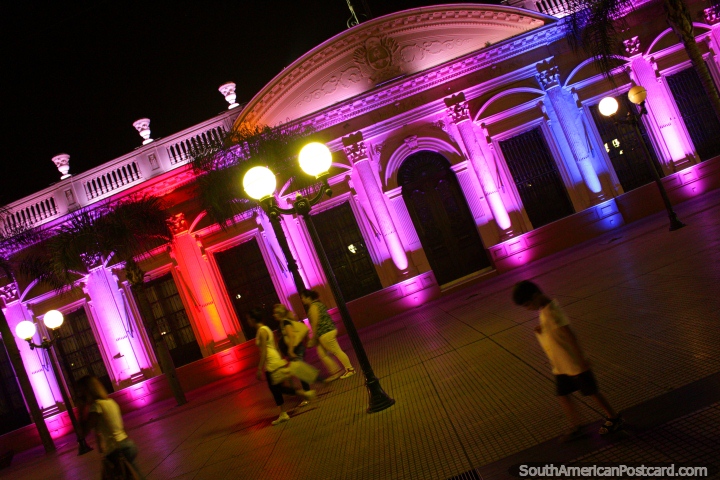