Rivera, Uruguay - Free Shops Galore On The Border Of Brazil

I came to Rivera from Montevideo which takes 6hrs by bus. The reason I came here is because I drew a straight line from Montevideo to Puerto Iguazu in Argentina during my very first trip to South America and decided to go for this direct route approach. I arrived here at about midnight, got in a taxi and asked the man to take me to Hotel el Cheapo (a budget hotel) where I had a shower and some slumber.

Rivera is a combined border town with Brazil's Santana do Livramento. The residents can flow freely across the border between the 2 cities. That's not a bad deal because Rivera is full of duty free shops. I was well off the beaten track and I was the only gringo in town (seriously). I didn't do a lot in Rivera apart from eat breakfast, get a haircut for 35 cents and see a statue of Artigas (the National Hero) in the plaza while walking around the streets. The surrounding region is known for its cattle ranches and the growing of crops such as corn, rice, fruit and potatoes.

I walked up the road towards Brazil where on the border there are 2 big flags, one for each country. I did the obligational jump from one country to the other and then stood on the line, which must have been the country of Braziluguay. There's no customs, no border control, no fence, no police, no nothing, just hotdog stands, street vendors and markets. I didn't get a stamp on my passport and had some explaining to do when I tried to cross from Brazil back into Argentina a few days later. I had to bring out my map and show them where I had crossed into Brazil. The Argentinian border police also wanted to know and I also showed my map to them. Apparently I was supposed to go and find the passport stampers in their office in Rivera! I didn't know about this at the time, it was my first trip to South America. 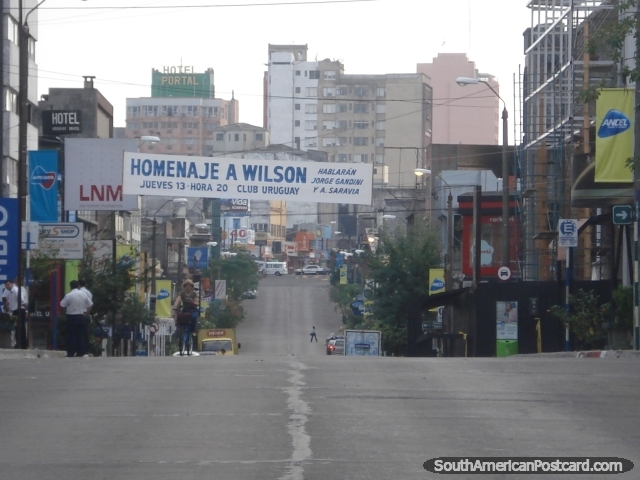