Ushuaia, Argentina - Southernmost City At The End Of The World

Seals have a great time sleeping and playing on the rock islands of the Beagle Channel, Ushuaia.

Navy ships at the port in Ushuaia, a spectacular sight indeed.

Mural of an action scene, local history of the Tierra del Fuego in Ushuaia.

The end of the world is closer than you think. Not that this is a bad thing because the world's southernmost city Ushuaia is a beautiful place! With the Martial snow-capped mountain ranges on one side and the waters of the Beagle Channel on the other, it's not as cold as you would expect. Argentina's northernmost city La Quiaca on the Bolivian border is a whopping 4987kms away!

My journey through the Tierra del Fuego from Punta Arenas in Chile by bus to Ushuaia took 11hrs. We crossed the border at San Sebastian, travelled down through Rio Grande and Tolhuin and arrived in Ushuaia by dusk. Much of the terrain between the border and Ushuaia is bleak and barren but there is also open farmland and green rolling hills with small communities and large wooden houses scattered around in parts.

They say Machu Picchu has a stunning setting but I think Ushuaia has one to rival it! Come down to the water's edge around 6am to see the early morning sun light up the bay with golden light with an amazing glow reflecting from the water and buildings that spreads out around the bay in a halfmoon. The waterfront offers a very pleasant place to walk and relax. The city and streets have nice buildings and shops with character, quirky things and street art.

Excursions by sea and land are the big drawcard at the port, which by the way, is quite spectacular! Actually while I was in town, so were the navy and they opened their huge ships up to the public, quite a sight indeed! The 3 main excursions by sea and land are firstly to the 'End of the World Lighthouse'. This is the excursion I went on and includes 'Birds Island' and 'Seals Island'. It is truely a fantastic trip and well-priced at around $80USD (cheap for Ushuaia). There are daily departures at 9:30am and 3:30pm. Please note the lighthouse (Faro Les Eclaireurs) is not the real 'lighthouse at the end of the world', that is hundreds of kilometers further south! This excursion is entirely by sea. The second excursion is to 'Penguin Island' with daily departures leaving at 3:30pm. This excursion covers more distance, therefore is longer in duration and has a higher price. The third main excursion is to 'Harberton Ranch' which leaves port at 9am on Tuesdays, Thursdays, Saturdays and Sundays. There are also daily tours to the Tierra del Fuego National Park, Escondido and Fagnano Lakes, Esmeralda Lagoon and Turqoise Lagoon. The 'End of the World Train' is another option but isn't cheap at around $100USD for a 4hr trip. You can see that Ushuaia is not only the end of the world for its location, but also for what it does to your bank account! The Martial Glacier takes a couple of hours to hike up to or you can take a tour.

Museums in Ushuaia include the Maritime Museum, the military prison (Presidio), the Museum of the End of the World and the Yamana World Museum about the history of the Yamana Indians.

Tierra del Fuego National Park is of course another big drawcard in Ushuaia. It's 12kms west of the city and has well-marked trails for hiking to see flora and fauna. Trails of 4-8kms for moderate to advanced hikers include the Pampa Alta Trail, the Cerro Guanaco Trail, the Hito XXIV Trail and the Costera Trail. Other easier trails run from 0.5-2kms and include the Paseo de la Isla Trail, the Mirador Lapataia Trail, the Castorera Trail, Pipo River Waterfalls, Laguna Negra Trail and Del Turbal Trail. Buses and shuttles to the park leave almost every hour and there's an entrance fee once you arrive. A map of the trails is available to pickup when you enter. Going to the park without a guide is recommended if you like to do things in your own time, however tours are also available. Camping in the park is also an option! Lake Roca has a paid camping site with facilities and also there are free camping sites without facilities. For more information about Tierra del Fuego National Park, please visit: WelcomePatagonia, PiranCafe, BlogPatagonia and DayTours4u.

From Ushuaia it's a 1hr flight north to El Calafate, but I didn't stay long (6hrs). The prices of tours in El Calafate are astronomical. I took a bus over to Puerto Natales to see Torres del Paine in Chile instead (5hrs).

I enjoy city photography and street art. A pair of indigenous faces on a wall outside a museum in Ushuaia in Argentina! #streetart #urbanart #Indigenous https://t.co/jcPK7K0Sef pic.twitter.com/gv2caj69gD

The double decker bus that takes you on the circuit of museums in Ushuaia, Argentina. I visited 1 museum but I like the bus better! #bus #museum #Argentina https://t.co/jcPK7K0Sef pic.twitter.com/2Wk0H5j8NX

Ushuaia certainly is the end of the world, not only for its location but also for what it does to your bank account! Everything is overpriced apart from maybe the ferry excursions!

Who said #Ushuaia is cold? It's 19 degrees & sunny! View from my room up the hill close to a glacier. I'm wearing shorts & a t-shirt. #sunny pic.twitter.com/LDDv2SIwi4

Lighthouse in the harbour of Ushuaia, contrary to popular belief it's not the #lighthouse at the end of the world, that's 100s of kms away! pic.twitter.com/vrWBDCbjjJ

Good morning from #Ushuaia, an extremely #picturesque place to say the least! I've 3 days to enjoy being at the end of the world! #Travel pic.twitter.com/y1WdUiKpa7

I'm in Ushuaia! I've paid a little extra to have this room to myself, double bed, heater, bathroom, kitchen, WiFi, $28usd per night. #Travel pic.twitter.com/cMhmYGhxSH

Now at the San Sebastian border crossing from Chile to Argentina on the way to Ushuaia, food stop first. #border #Chile #Argentina pic.twitter.com/cspAXI84fS

On the ferry at Punta Delgada. #ferry #Travel #Chile https://t.co/jwEo8Q7Ghg

Coming up to Punta Delgado for a 20min ferry across the waters in the direction of the border of Argentina! #bus #ferry #Travel pic.twitter.com/iZA5fDsyHz


View all photos in the Ushuaia Photoset

Hospedaje Teresa and Tito, Ushuaia, Argentina (November 2017 - 4 nights) - The hospedaje of Teresa and Tito is very comfortable! It's located up the hill in Ushuaia about 5 blocks. I paid a little extra to have a semi-dorm with double bed to myself, $500 pesos ($28USD). The room had a private bathroom, kitchenette and WIFI. Breakfast was also included. It made a nice change from sharing bathrooms in other places I had stayed. Tito and Teresa invited me into their house for conversation and to eat sea-urchin soaked in lemon juice! The address: Intevu 18 casa 20A, Calles A. Henriquez y Trenque Lauquen. Whatsapp: +54 9 2901612972. Recommended.
Argentina Travel Blog | Photos of Argentina | Festivals in Argentina | South America Videos 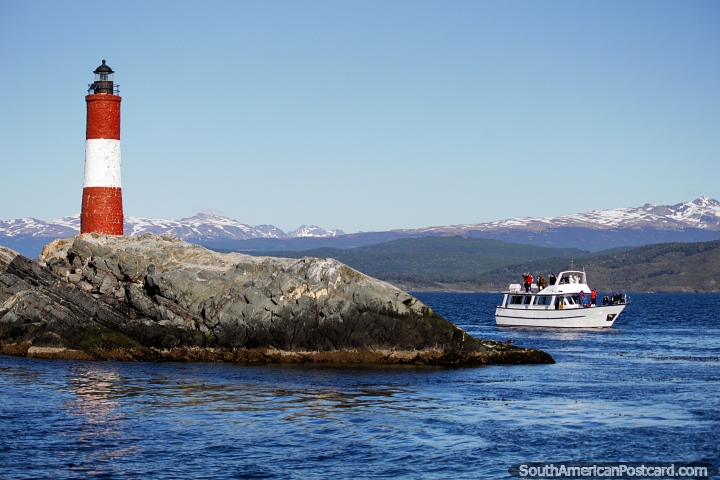