Punta Arenas, Chile - Things To Do & See In & Around

Ducks in the water and the distant port in Punta Arenas.

Modern building with many windows, view through the trees in Punta Arenas.

The Cathedral in Punta Arenas (1901), the original was destroyed in 1892, 4 months after inauguration.
Map location: Punta Arenas, Chile

Punta Arenas presents the perfect place to explore and travel the southernmost regions of both Chile and Argentina from! Especially considering there are direct flights to and from Puerto Montt and Santiago. Of course you can also get to Punta Arenas by land and sea, but for me I was ready to cut to the chase in my travels of the Patagonia after over a month on the road further northward on the Carretera Austral (Route 7). I used Punta Arenas as my start and end point and spent 2 weeks seeing Punta Arenas, Tierra del Fuego, Ushuaia, Puerto Natales and Torres del Paine! Punta Arenas is a 2hr flight from Puerto Montt or 3hrs 30mins from Santiago - see Sky Airlines. From the airport I paid $10000 pesos ($15USD) for a taxi into the city center. I asked the driver if he knew of an economical private room to stay and luckily he did - a private house with rooms for rent out the back, the cost also being $10000 pesos, see review below.

Punta Arenas has a fantastic historic center and is a great city for photography with all its European buildings and the port area! The tourist circuit called 'Circuito Urbano de Punta Arenas' is marked with blue information boards outside the important buildings. Buildings include the Daughters of Maria Auxiliadora College and Chapel (1889), Sara Braun Palace (a national monument), Carcel and Presidio - prison / jail (1898), Montes Pello Palace - neoclassical Italian (1920), the Cathedral (1901), Residence of the Exploiter Tierra del Fuego - an antique wooden house (1918), the Residence of French cattle raiser Alfonso Roux and the huge Maria Auxiliadora Temple and Sanctuary. There is also an 'Antarctic Tourist Circuit' that includes the Blanchard Residence (1907) - home of a prominent whaler and the marking of a great moment - the location where the old post office stood where Captain Robert Falcon Scott, a British Antarctic explorer (1868-1912), sent almost 400 letters announcing that his ship Discovery, which had set sail from England on 6 August 1901 had returned safely from its expedition to the Antarctic.

Around the Waterfront & Port

Walking or renting a bicycle to see the waterfront and port is a great activity in the city of Punta Arenas! There are some interesting sights to be discovered. Plaza Lautaro has an interesting history where the churchyard opened in 1855 and closed in 1894. It has 2 sections for catholics and non-catholics, around 1300 people were buried. Some being the victims of an English warship, where there was an explosion in the bay on April 21 1881. Along the waterfront itself you'll find a shipwreck at the port, the red brick facade and steeple of the Sanctuary of Medalla Milagrosa, the Mezquita Mosque / Hindu Temple and Plaza Hindu with bronzeworks including Mahatma Gandhi and the Municipal Market where people come to eat until their heart's content. The Municipal Market sells ready to eat ceviche - combinations of octopus, salmon, crab, shrimp and hake!

If it seems quiet around the city streets in Punta Arenas and you're wondering where all the people are, you more than likely will find them at the cemetery where the locals spend a lot of time giving respect to their loved ones. The cemetery in Punta Arenas is known as one of the most beautiful in the world and is a national monument and has at least a couple of legends! The legend of Sara Braun where after her death she wished the central door to be closed forever which it has been. The Unknown Indian who died on an island and was buried here, his grave is marked by a prominent statue. The cemetery is a colorful rainbow of flowers and beautifully manicured trees and hedges.

Routes, expeditions and tours from Punta Arenas vary in price so shop around and see where the better deals are! Tours include the Seno Otoway Penguin Colony, Lynch Lagoon, River of the Deer (Rio de los Ciervos), Fuerte Bulnes (fort), penguin colony and sea lions on Marta and Magdalena Islands, Cabo Froward (challenging trek), Humpback whale watching at Carlos III Island, Glaciers of Tierra del Fuego, fly fishing and maritime routes. I chose to do a full day tour in the Tierra del Fuego to see the King Penguins!

After several days in Punta Arenas including a full day tour I took a bus through the Tierra del Fuego across the border to Ushuaia in Argentina which takes 11hrs.


View all photos in the Punta Arenas Photoset

Hospedaje With No Name, Punta Arenas, Chile (November 2017 - 5 nights) - There's no sign and no name that I know of. There are several rooms behind a house, comfortable too! Private room with TV and heater, the WIFI didn't reach though. Shared bathroom and about 5 blocks from the center of town. A good price for Punta Arenas at $10000 pesos ($15USD). I could buy pizza at night and warm it up the very hot gas heater in the morning! Go to Jorge Montt Street 201-299, it's the 3rd house from this sign, see photo. Recommended.
Chile Travel Blog | Photos of Chile | Festivals in Chile | South America Videos 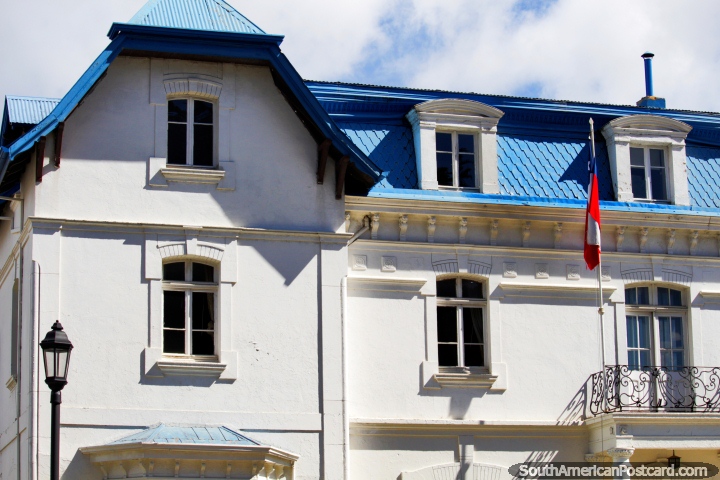