Salta to Paso de Jama, Argentina - 5hrs (443kms) To The Border Of Chile 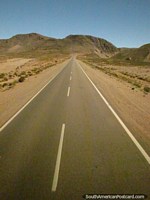 The road is in great condition for the journey in the mountains to Paso de Jama. 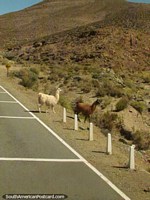 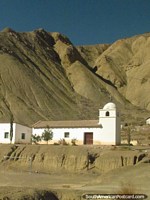 A white church in the mountains on the road to Paso de Jama. 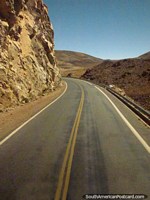 The journey from Salta to the border of Chile which I have now done 3 times takes at least 5 hours (443kms) and passes through some amazing terrain in the north-west of the Jujuy province, make sure you do this journey in the day.

5 Hour Bus from Salta to the Border

The bus leaves Salta and heads north through San Salvador de Jujuy and up to Purmamarca on highway 9. Around Purmamarca is the Mountain of Seven Colors, an amazing rock rainbow of brown, red, green, white, purple and other colors that is hard to describe. Here is good page about the Precordillera (Argentina's North-West). As we passed through this mind-blowing scenery I started to see a desert of cactus and huge faces of jagged rock on the tops of hills, it reminded me a lot of Tupiza in Bolivia.

A while later the landscape changed into the beautiful salt flats called Los Salinas Grandes - polygonal salt sediments on the bottom of an ancient lake, fields of salt for miles with mountains in the horizon. After the salt flats the landscape becomes dry with herbs and grasses growing in clumps and cactus rock hills. Closer towards the border, highway 52 passes more salt flats before ending up at Paso de Jama border control into Chile.

The first time I crossed into Chile at Paso de Jama I visited Calama and Iquique. The 2nd time I travelled straight up to Arica and the 3rd time I stopped in San Pedro. Actually the total time in 2014 of the journey from Salta to San Pedro de Atacama was 11hrs including 90mins at passport control. Now there is a totally new building and there were 3 bus loads of people being processed at once, it's much faster. Photos from between Paso de Jama and San Pedro de Atacama / Calama continue here.


View all photos in the Salta to Paso de Jama Photoset 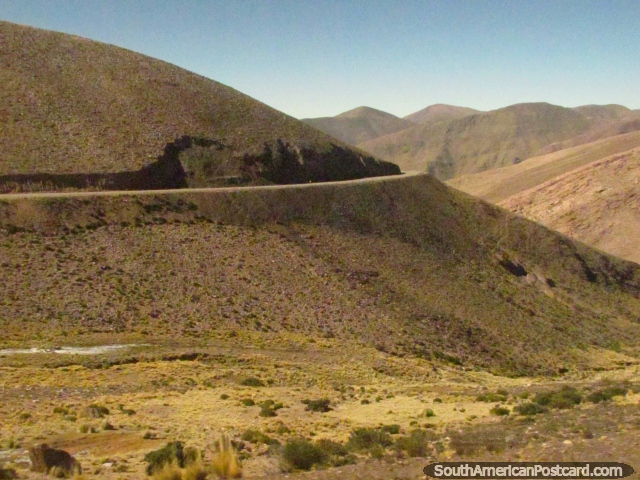