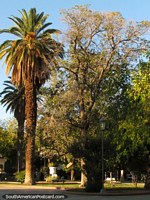 The sun glows on the trees at days end at Plaza 25 de Mayo in San Juan.

Colored stairway leading up to the Spanish plaza in San Juan.

Arriving in San Juan from Mendoza took 2hrs 15mins by bus, it was the morning and I planned to spend the day in the city having a look around and getting to know the place a little.

From the bus terminal it's about a 15min walk into the center of town. During the walk I stopped to take some photos at the national college Pablo Cabrera which is a national monument founded in 1862. A couple of times students stood in my photos, they were a very happy and friendly bunch. Across the road on a sunny street corner I passed church Capilla San Clemente before arriving nearby at Plaza 25 de Mayo, the main square. In general San Juan celebrates the life of this man, Domingo Faustino Sarmiento (1811-1888), he was President of Argentina and was born in the city. There are statues and monuments of him all around the city including Plaza 25 de Mayo.

The plaza has a huge fountain, palm trees, statue of Fray Justo de Santa Maria de Oro and lots of shade. Across the road is the cathedral with its Big Ben clock and a bunch of statues outside, it's not the most eye-catching cathedral I have seen. In the plaza a large group of students chatted with me and asked for a group photograph, like I said, the locals here are friendly. A block or 2 across from the plaza is Avenue San Martin, this takes you down towards the park, there are other sights along the way also. There is some sculptured artworks along the road just before the house where Domingo Sarmiento was born (Casa Natal de Domingo F. Sarmiento). This house is Argentina's first national historical monument. You can go inside the house and view the grounds for 10 pesos. Very near is the Ministry of Tourism and Culture building where there are a couple of dinosaur models outside. Down the road a little more is the theatre but there is nothing to see from the outside at all. Plaza Laprida is where I came to next. It's a nice park with some very tall trees and a statue of Francisco Narciso de Laprida (1786-1829), a politician and lawyer. I continued my walk along the green and leafy San Juan streets passing the Ministry of Education building before arriving at Plaza Espana which has a bunch of war monuments on display - a tank, a gun and a plane. There is also a bust of Lieutenant Oscar Augusto Silva - a fallen Falklands War soldier.

Just beside here is park Parque de Mayo, this is the real park in San Juan. It's green and open with tall trees and palms with a big lagoon in the middle. Joggers run around the park to get fit. Of course being Argentina, there are a ton of statues and busts of important people scattered all around - composer Arturo Beruti (1862-1938), columnist Juan Pablo Echague (1877-1950), author and poet Segundino Navarro (1852-1910), son of the mayor Jesus Dojorti Roco (1906-1955), politician Manuel Lainez (1852-1924), General Jose de San Martin on his horse, Dr. Anacleto Gil (1852-1939), Dr. Federico Cantoni (1890-1956) and Father Juan Luis Fansolato (1905-1994) to name just a few. I stopped and chatted to a policeman for a while and told him how impressed I was with his city, how beautiful and clean it was. I bought an ice-crean and headed back into the center to find food. Off of the main plaza is Peatonal Domingo F. Sarmiento, a walking area around the shops. It was here I ate what I always enjoy eating in Argentina, a superpancho (long hotdog)! I enjoyed the day very much.

If you are in San Juan for more than a day you really should do the tour up to Ischigualasto. This is the place of the origen of dinosaurs, a landscape from another world with red mountains and geological formations. Located 330kms northeast of San Juan, a day tour costs around $100USD. I will get there next time!

I spent the evening waiting around the bus terminal for a late bus to Cordoba which ended up being a 9hr journey.


View all photos in the San Juan Photoset 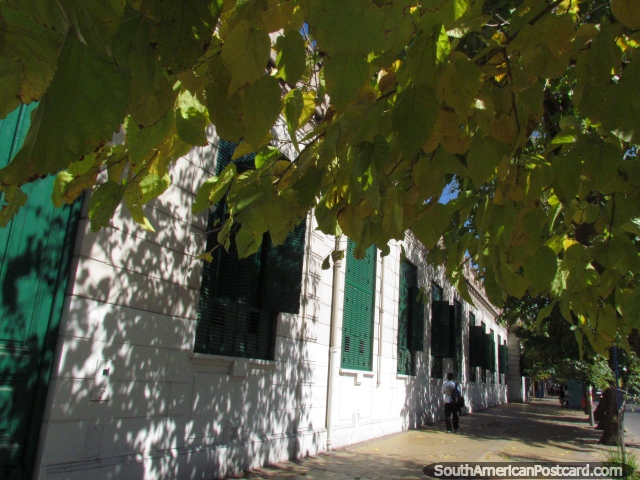