Parana, Argentina - Day Tours Of The River In An Attractive City

Antique facade with wooden window shutters from 1890, features a face at the top, Parana.

Facade of the library in Parana with allegorical figures, built in 1908, architect Rodolfo Fassiolo.

Steeple of the cathedral in Parana with Jesus statue, dome and cross.

I have been to Parana twice now, both times after visiting nearby Santa Fe. Parana is on the eastern side of the Parana River 1hr from Santa Fe. Parana is a place I would recommend visiting if you like attractive cities and peaceful walks along the riverfront. On a weekend there is lots of activity down beside the river, the locals are very lucky.

As with most of my city tours I like to start at the central plaza, in this case Plaza 1 de Mayo (Plaza 1st of May). Like most city plazas, it's Parana's social and cultural meeting point and is surrounded by emblematic buildings. The plazas 2 fountains were built in 1886 and the main monument is of independence leader Jose de San Martin. These emblematic buildings include the stunning cathedral, Palace Episcopal, College del Huerto, Palace Municipal, School Jose M. Torres, the post office and the social club. Even the McDonalds restaurant has it's own historical building on the corner while Parana's theatre Teatro Municipal 3 de Febrero is 2 blocks away. A few blocks from the center is Plaza 'Juan Bautista' Alberdi, he was a political theorist and lived from 1810-1884. The plaza / park is grassy and has a monument to the volunteer firemen of Parana. The city has several museums - Museo Historico Provincial Martiniano Leguizamon, Museo Bellas Artes Pedro E. Martinez and Museo de la Ciudad. Other churches include San Miguel, Nuestra Senora del Carmen, Nuestra Senora de la Piedad, Sagrado Corazon and Nuestra Senora de la Asuncion. Other plazas include Plazas Alvear, Mitre, Saenz Pena and Carbo.

I decided to bypass McDonalds this time in favour of an 'all you can eat' lunch at the big Chinese restaurant on one side of the plaza. It cost $50 pesos ($11USD) for an absolutely great Sunday feast. The 2nd time I was in Parana I enjoyed McDonalds several times during the day because I had been living in Bolivia all year where they don't have McDonalds!

I wanted to get down to the river and take a look, the port is called Puerto Nuevo (New Port). I walked several blocks and arrived at the Navy building Prefectura Naval Argentina which is a brown and white historic building with a monument to Martin Jacobo Thompson (1777-1819), he was the 1st captain of the ports. Another monument to Admiral Guillermo Brown is in the small park across the road. Around this area people enjoy fishing, boats are docked and ferry boats take people on river tours.

As I walked along the riverfront past the police monument, it was clear to see that half of the cityfolk of Parana were down here enjoying themselves - sipping mate tea, eating, playing, walking and relaxing. Sailboats cruised up and down the river and kids rode their bikes along the boulevard of Parque Urquiza (park). A monument to the heroes of the Malvinas (Falklands War) can be seen while walking towards the Puerto Viejo (Old Port). Along a little from the fountain is a pretty beach area with umbrellas and small wooden wharfs. It is a nice place to sit quietly for a while and relax watching the river flow by. Unfortunately the beach is private. I had wondered why no one else was here. The big hill behind the road offers some fantastic views of the area and has an airplane monument at the top. It is an enjoyable afternoon to be beside the Parana River, you can sit and have a beer while watching the sun go down and boats sail into the orange sunset.


View all photos in the Parana Photoset

Hostel Parador, Parana, Argentina (November 2019 - 1 night) - Hostel Parador is a nice little place to stay on the main road near the bus terminal in Parana. $20USD got me a private room with bathroom with tv and wifi. It's around 15 mins walk into the center of the city. The staff are friendly and helpful and brought me a jug of cold water to drink on arrival. Recommended.
Argentina Travel Blog | Photos of Argentina | Festivals in Argentina | South America Videos 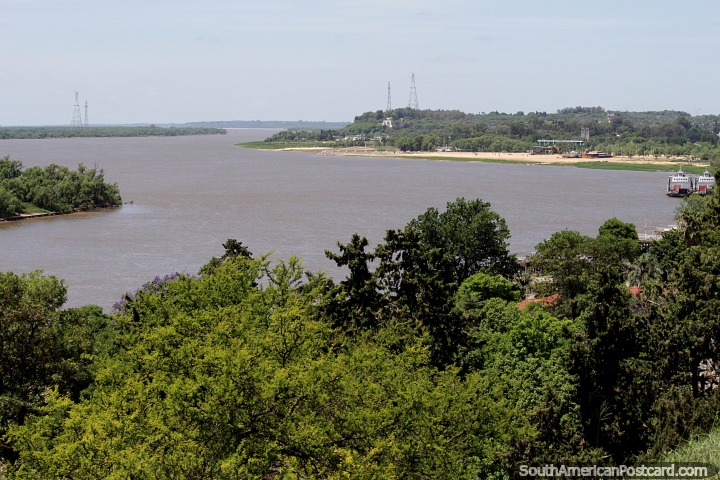