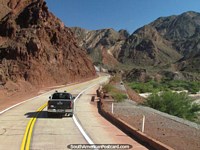 The road around the mountain ridges above the Lerma Valley on the way to Cafayate. 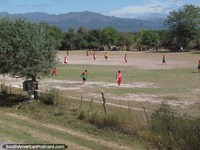 A soccer game on a pitch between Rio Rosario and the 2nd river between La Merced and El Carril. 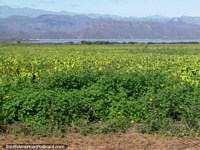 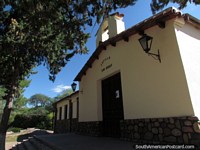 From Salta to Cafayate is 197kms, takes 3 and a half hours by bus and costs around $100 pesos. It's a great journey, especially the last 90 minutes through the Quebrada de las Conchas (ravine).

The Drive from Salta

The trip through the Lerma Valley (Valle de Lerma) south of Salta passes firstly through open green pastures, crop fields and cow grazing land with mountain ranges in the distance around the towns of Cerrillos and La Merced before crossing the Rio Rosario (river). We crossed another river with a train bridge also running over it along beside before passing through El Carril at 1170masl (meters above sea level). Much farmland and overgrown bush up until we passed through the town of Coronel Moldes. Shortly afterwards out on the left I could see the lake - Lago Embalse Cabra Corral before we passed through El Carmen and La Vina at 1190masl.

We now came to Talapampa where the bus stopped for about 20mins for food etc. There were many birds in the pampas waters across the road and nice views of the mountains which were now a little less in the distance. From Talapampa to Cafayate takes 1hr 30mins and in this time the bus travels up to 1660masl. Beside the river the road cuts it's way through the rocky terrain as we slowly ascend. This is the beginning of cactus and ceramics country. The mountains are becoming red and jagged. There is still much greenery down in the valley beside the river. We pass a small vineyard. The mountains in places have many colors, some of the views from the front seat on the top deck of the bus were incredible! The terrain makes you feel as if you are on the moon with it's many shapes and colors in a panoramic view. This is the Quebrada de las Conchas and this is the area where the tour groups bring people to visit the various sights of Cafayate.


View all photos in the Salta to Cafayate Photoset 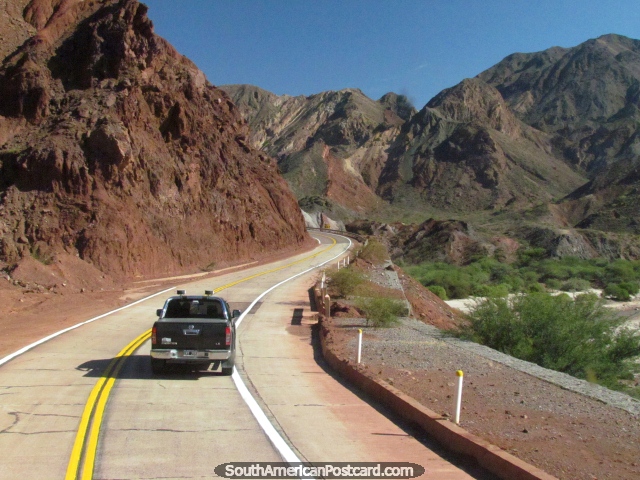