Mendoza From Santiago, Argentina - Border Crossing In A Spectacular Setting 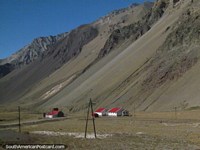 3 red-roofed buildings, the train tracks run between, must be the station, Cristo Redentor. 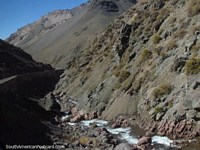 River, road and mountains between Cristo Redenter and the passport office. 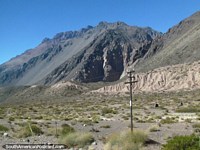 Mountains with different textures and different colors between Cristo Redentor and Mendoza. 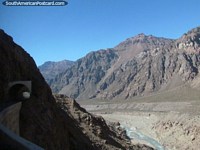 Along a road through a tunell on the mountains edge above the valley between Cristo Redentor and Mendoza.
Map location: Mendoza from Santiago, Argentina

This blog is the 2nd part of the journey between Santiago Chile and Mendoza. From the top of the mounatins at Cristo Redentor all the way down to Mendoza. See Part 1 for info and photos of the ascent up from Santiago.

We crossed from Chile into Argentina, the official border is about 10mins before the passport control building. Processing our bus took 40mins and then we began the spectacular descent down the mountains towards Mendoza. It only took another 2hrs 30mins to reach Mendoza actually. During that time I was really blown away by the scenery and terrain, it is amazing!

We passed through the village of Las Cuevas and travelled down alongside the river and rugged, jagged mountains. The train tracks run along the right side of the road. 5 or so minutes after passing through Las Cuevas you will see them run through a station with bright red roofs, it's quite a sight! The road weaves and cuts back and forth, you may catch a glimpse of a few snowy peaks during this time. This is all in the 10mins before arriving at passport control. We continue. On the left is an orangey / black bus sitting deserted, abandoned and dwarfed by the mountains above it.

The road and train each have a bridge adjacent to each other as we cross the river at the town of Puente del Inca (Inca Bridge). There are restaurants and hostels here. The road travels down the middle of the valley. The river is beside and mountains of colors are all around, it's beautiful. We pass a big hotel called Hotel Ayelen which sits in a very picturesque setting. Just down from there the train tracks pass by a museum called Mundo Perdido (Lost World). We pass by another little community, there is building here with a bright blue roof on a little hill above a small green / yellow farm with horses, it's very pretty.

Some interesting rock formations appear. The road heads up above the valley and curves through tunnels around the mountain edge. Everything starts to flatten out and widen as we come to the end of an amazing run of views.

But wait there's more! The now calm and tranquil river beside us drifts away and the landscape opens up again to bright yellow / green trees, just like on the Santiago side of these mountains. There's a few snowy peaks in the distance out to the right before we pass the big lagoon on the left. When you start seeing vineyards in all directions, you know you are in Mendoza!

Overall this trip from Santiago to Mendoza took 6hrs 15mins including 30mins stopped at road works and 40mins for passport control.


View all photos in the Mendoza From Santiago Photoset 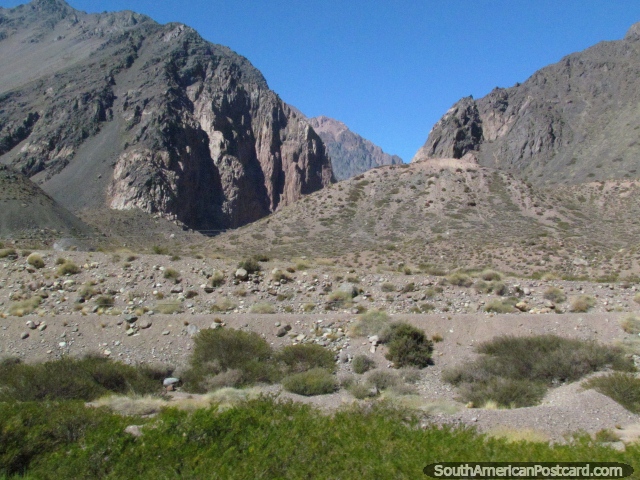