Large cat, woodpeckers and owl, taxidermy at the Municipal Museum in Porvenir.

The Tierra del Fuego (Land of Fire) sits between Punta Arenas in Chile and Ushuaia in Argentina. An archipelago of rugged beauty, harsh climate, shipwrecks, wildlife and with a history of how the native Selk'nam people were wiped-out between 1880-1920 for gold and land. Isla Grande is the main island and is where you can take a tour to see king penguins and is also where you cross the border from Chile to Argentina to get to Ushuaia!

I bought a ticket for an all day tour of the Tierra del Fuego in Punta Arenas for $55,000 pesos ($80USD) and it is another $12,000 pesos for the park entrance on top of that. At 8:30am I was picked up at my hostel and we set out to get down to the port in Punta Arenas before 9am. From the port we headed across the Strait of Magellan by ferry for the 2hr journey to Porvenir, it was a beautiful sunny day on this morning! In Porvenir we made 3 stops. Firstly we made a 10min stop at Plaza Selk'nam where the extinct Selk'nam people are remembered. They came to these lands 11,000 years ago as hunters and in 1881 numbered around 4000. They were tall, good looking, strong and vigorous but yielded and became extinct when the settlers from Europe and Chile arrived. Our next stop for around 30mins was the Municipal Museum (Fernando Cordero Rusque) where you can see the history of the Selk'nam people in photos, sculpture and artifacts as well as taxidermied animals such as crabs, penguins, ducks, flamingos, geese, hawks, heron, ibis, owls and cats. Our last stop in Porvenir was for a hearty lunch, mine being chicken and mashed potato, bread, butter and coca-cola! I had also brought a healthy selection of groceries and water in Punta Arenas for the day so I was never without food throughout the trip.

Porvenir (founded in 1894) has a large proportion of its population who originally came from Chiloe Island and Croatia for sheep farming and the gold rush at the end of the 19th century until early in the 20th century. The architecture and historical character of these times has been preserved. The plaza in Porvenir is considered very beautiful and has some 134 trees of exotic species and the Church of San Francisco de Sales (1903) is also located here. Around Porvenir you can see flora and fauna including guanacos, grey and red foxes, upland geese, ashy-headed geese, ruddy-headed geese, buff-necked ibis and the crested caracaras. The coastal road offers great views of the Strait of Magellan and passes the Plaza de las Banderas (flags), the Croation (Yugoslav) Park and the Remembrance Park which has examples of machinery dating from the early 1900's. The Municipal Cemetery in Porvenir is noted for its beauty and for the mausoleums of the old colonizers. Cerro Mirador lookout hill is located 2kms south of town for seeing panoramic views of the town and bay. The Stone House (Casa de Piedra) is where Croation pioneer Natalio Foretic discovered and began to exploit a lime quarry. Chilota Bay, a fishing cove 5kms from Porvenir where we arrived on the ferry, is the main port for the town. Porvenir has hotels, restaurants and all basic public services and amenities.

From Porvenir it's a 75min drive on the gravel coastal road to see the King Penguins at Parque Pinguino Rey! Look out for vicuna (similar to deer) beside the road. The King Penguin is the second largest of the penguin species in the world. It reaches reproductive age between 3 and 6yrs old, gestation takes 14-15 months and is the longest gestation period of all 18 penguin species. King penguins establish themselves in areas near beaches or grasslands for breeding and lay just one egg. The chicks are covered in brown down (fur). The parents alternate guard and feeding duties. The color intensity of the king penguin depends on its age, when the color is orange and yellow like a sunset, it is an adult. They walk with their wings open to keep balance and feed on fish, squid and crustaceans. The closest you are allowed to get to the penguins at Parque Pinguino Rey is 35 meters! The photos I have from here were taken from this distance with a 250mm zoom lens fully zoomed in. You will need a camera much larger than this for more professional looking pictures! While you are here look around for Caiquen, a pair of birds on the ground - the white is male (Macho) and the brown is female (Hembra). Penguin Park is open Tuesday to Sunday, 11am to 6pm with a $12,000 pesos ($18USD) entrance fee.

From the penguin colony we drove for nearly an hour northward and stopped at Cerro Sombrero, a ghost oil town founded in 1958 as a centre for the Petrol Company (ENAP). Cerro Sombrero certainly does live up to its name as a ghost town with nobody around and has old rundown buildings like the church and cinema. I couldn't even see any shops open. The streets have old wooden pastel colored houses, those of the workers who used to live here in better days.

We now headed northward 20mins from Cerro Sombrero to cross the waters at Bahia Azul (Blue Bay) over to Punta Delgada! There are some beautiful and large murals on the side of Bahia Azul of indigenous people and a long stony beach. It's a quick ride on the ferry over to Punta Delgada where the red and white lighthouse (1898) will catch your eye as you arrive and dock!

Just a short distance west from Punta Delgada on the road back to Punta Arenas is San Gregorio. This is where we stopped to see an amazing shipwreck! That of the Vapor Amadeo (36 meters). The ship lays rusted and wrecked on the beach and is a spectacular sight to see! The Amadeo worked for the Menendez Behety company from 1893-1932. The ship was built in London in 1869 and arrived in Punta Arenas in 1899 where she was destined to be for the next 40yrs. I presume that the Vapor Amadeo was shipwrecked in 1932 because firstly the date until she worked for the company (1932) and secondly the fact she didn't make the 40yrs service in Punta Arenas which would have been up until 1939. The signs didn't say when she sunk. The ship is a national monument and a great sight in the Tierra del Fuego!

Back to Punta Arenas

From San Gregorio back to Punta Arenas takes around 90mins and by the end of the day after 12hrs of driving and sightseeing you will be happy to call it a day, but a damn fine day at that!

The ferry is ready for the 2 hour journey across the water, 8am now, leave at 9am, tour in Punta Arenas Chile. #tour #ferry #Chile pic.twitter.com/OB0zTSRuNB

In a ferry from Punta Arenas heading to Porvenir 2hrs, all day tour to see penguins and much more! #Travel #Chile https://t.co/jcPK7K0Sef pic.twitter.com/UjyjMblnTo

In Porvenir #Chile near the museum is a park in memory to the indigenous people who no longer exist, special people. #indigenous #Porvenir pic.twitter.com/Q0kfKZrRGO

At museum in Porvenir. The natives were killed off 1880-1920 by the Chileans & Europeans for gold and land. #Travel #Chile #museum pic.twitter.com/tPfglYegbk

After the penguins we stopped at Cerro Sombrero a ghost oil town, took another ferry & saw a shipwreck at San Gregorio. #tour #Chile #Travel pic.twitter.com/RXr6hcRYUJ


View all photos in the Tierra del Fuego Photoset 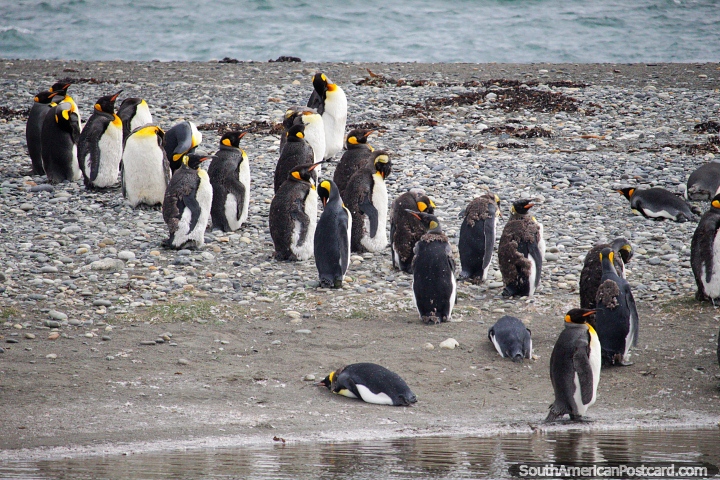