Rosario, Argentina - Che Guevara Was Born In A House At 480 Entre Rios

Military figures of the flag monument and cathedral in Rosario.

Ministry of culture building with a face on the side in Rosario.

Religious figure, monument below the towers of the cathedral in Rosario.
Map location: Rosario, Argentina

Originally I came to Rosario in 2008 for 5 nights but didn't do much outside the city center where I was staying. I visited the bars, clubs and shops mainly. I returned in 2012 to discover much more about Rosario, not all of it appealing. It has been said that Rosario is Argentinas pretty girl capital, this could be true, but I can't say for sure. Anyway, what I can say is that after arriving from Buenos Aires, a 4hr bus ride and catching a taxi into the center which takes around 10mins. I finally found a reasonably priced place to stay for my girlfriend and I.

Looking for a Budget Hotel

A budget hotel was not so easy to find. I had to visit the tourist office first to get directions for a place, the office is on the main street along the riverfront.

Night Photos of the Cathedral

That evening I took my camera out to take a few night photos of Rosarios cathedral and plaza and to enjoy watching the people in the city center.

Next day I started out early in order to see as much as I could around the city. I began down by the river near the colorful boatsheds. I walked in the direction of the white Navy building and tourist office. The first great thing to see is the huge monument called Monumento Historico Nacional a La Bandera - The Gallery Of Honour Of American Flags. For sure it's a group of spectacular monuments all in the same place but really it is just a huge area of concrete and has no soul. The worst thing though is the backdrop of apartment buildings all around it and so close, they should have planned that better I was thinking. I now came to a park with a fountain and a statue of Santa Francisca Javier Cabrini (1850-1917), an Italian nun, a patron of immigrants. On the other side of the road is the building for the river ferry called La Fluvial. An old sailboat called the Zvonimirova Ladja from The Navy of Zvonimir of Croacia stands as a monument in the park as well as a bust (statue of the upper portion of the body) of Admiral Guillermo Brown (1777-1857), a national hero. Some guys were fishing at the rivers-edge and had caught a bunch of small catfish. In the park around the ferry building there are various other monuments to people like Domingo Polichiso who was known as El Islero and lived on the islands in the Parana River and Pablo Sarasate (1844-1908), violin virtuoso from Spain who visited and played in Argentina. There are a couple of small plazas called Plaza Navarra and Plazoleta Abanderado Grandoli and some more bronze guys - Juan B. Alberdi (1810-1884) an influential Argentine liberal and John Baptist Scalabrini (1839-1905) Italian father of the migrants. I walked through another park area with a lookout point that had a view of the road and the backdrop of ugly apartments right behind it. I now went in search of the Che Guevara monument at Plaza Che which was quite a few blocks away.

It was a pretty rough walk getting to Plaza Che, a constant eye was needed on the pavement below to watch out for dog turds, it was bad, they were everywhere.

Finally getting to the Rosario train station where Plaza Ernesto 'Che' Guevara is really just a shabby field next to it with an old nothing special statue of Che at the back. There is nothing else really around here apart from an old church called the Instituto del Buen Pastor founded in 1896, another plaza called Lucio Fontana and some wall graffiti of Che, Simon Bolivar and some other military guys.

While walking to the park I passed church Parroquia San Cayetano before arriving at Plaza General Lopez which was originally a fruit market in 1858, it has many fully established trees. I found myself next on the high street where I passed a shop selling tango, salsa, flamenco and folklore dancing shoes called Bottier, the link goes to their website. A church called Basilica San Jose stands on the street corner nearby, an historic monument.

It was a long walk to get to Rosarios main park Parque Independencia from Plaza Che, at least 10 blocks. The park is large, the first section I walked around is dominated by a monument to Giuseppe Garibaldi (1807-1882) - an Italian general and politician, other monuments include one of composer Manuel de Falla (1876-1946) and ex-president Dr. Carlos Pellegrini (1846-1906) and military leader Manuel Belgrano (1770-1820). Parque Independencia has another area with gardens and a bridge over a small lagoon. It is not that attractive or well organised in my opinion. A sign shows a photo of Che Guevara as a baby with his parents sitting in a seat beside the water in 1928. On the other side of the road is a much bigger lagoon with an island and a place you can rent a small pedalboat and paddle around. In this area is a childrens garden and museum Museo Historico Provincial.

Where Che Guevara Was Born

Now I wanted to go and find the actual house (apartment) where Che Guevara was born. I made my way to the address of Entre Rios 480 by taxi, it's in the middle of town. I took a few photos and made a video.

The last thing I did in Rosario before leaving was to head back to the river and take a walk through the park there. The park was not that great, mainly because all the statues (at least 12) had been stolen and the park was full of empty concrete statue pedestals - not attractive! This is my main gripe with Rosario, it's a city that is disorganised in its placement of things (parks and monuments) and it is not really that attractive either, very overrated.

Bus Terminal and Out

It was time now to get back to the bus terminal called Terminal Mariano Moreno named after the Argentine lawyer (1778-1811). My next destination after Rosario would be Santa Fe, just 2hrs 20mins north.


View all photos in the Rosario Photoset

Emilia Hotel, Rosario, Argentina (December 2021 - 3 nights) - Emilia Hotel in Rosario is a comfortable choice but expensive ($50USD) compared to all other hotels (30) I stayed at in Argentina on this trip. Comfortable room and bed, aircon, tv, wifi, private bathroom and breakfast too. Central Rosario is full of the more expensive hotels, the cheaper hotels are all around the bus terminal a few kms away.

Hotel Britannia, Rosario, Argentina (May 2012 - 1 night) - Cheap accommodation apart from sleeping in a hostel dorm is not easy to find in Rosario. This place is the best of a bad bunch that I could find. Big room but such a rip-off!

Che Pampas Hostel, Rosario, Argentina (Jul 2008 - 2 nights) - A nice hostel with TV room, WIFI and kitchen and very nice staff. A very relaxing place to chill and have fun. There is a supermarket just a few doors away to get supplies. The staff took all the guests out to the nightclubs in the weekend. The room next to the foyer is a little noisy and not so easy to sleep in.
Argentina Travel Blog | Photos of Argentina | Festivals in Argentina | South America Videos 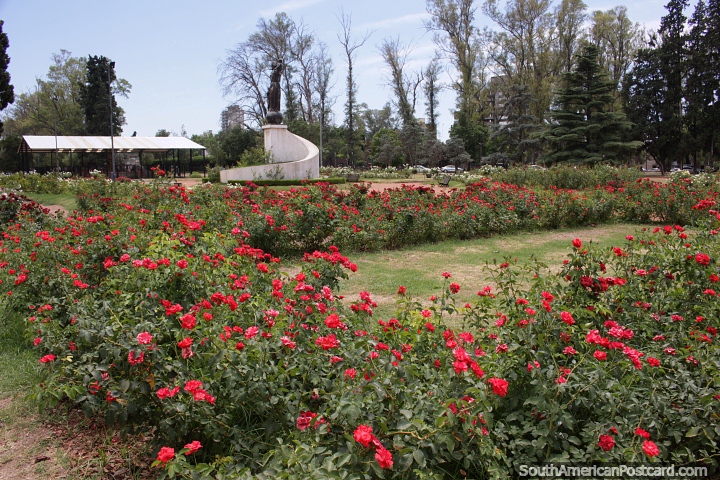