Flora looks beautiful close up, with or without a macro lens, Torres del Paine.

Milodon Caves formed by a glacier pushing into a hill, Torres del Paine.

Talk about lucky! A full day (12hr) tour to Torres del Paine National Park only cost me $30,000 pesos ($45USD)! Normally you need to pay another $20,000 pesos ($30USD) entrance fee but the park staff were on strike on this day. In a medium sized bus with our awesome tour guide we set out from Puerto Natales at 9am towards Torres del Paine while stopping at locations along the way and back including Villa Cerro Castillo, Grey Glacier and the Milodon Caves.

As you come into the area around Villa Cerro Castillo look out for gauchos (Baqueanos) herding their cattle on horseback or training and taming their horses in the green pastures around the hills. This is horse and cattle country, the land of the Baqueanos! Villa Cerro Castillo is noted for its famous horse monument and characterized by its houses with red roofs. There is a cafe here where you can get a bite to eat but the real key is the bring your own food and drink which is what I did. Lots of it!

Lake Sarmiento was the next stop we made so as to enjoy the views of the beautiful blue waters and snow-capped mountains that surround it! Look out for guanacos along the roadside in this area. Guanacos are related to camels just like vicunas, llamas and alpacas are too. These animals are protected by law and live in groups of up to 10 females, their young and 1 male.

We made a stop to see Amarga Lagoon before arriving at the Paine River Waterfall which is a really spectacular sight indeed, this is also where you get the best view of the famous rock towers of Torres del Paine! We traveled along the park road stopping at various lookout points along the way before taking an extended lunch break at Hosteria Pehoe located on a small island accessed by a bridge at Lake Pehoe. It is extremely beautiful here on a sunny day which thankfully we had! Hosteria Pehoe has amazing views of the lake and snow-capped mountains if you climb up the hill at the back. There's a restaurant and accommodation but this place is only for the seriously rich at well over $100USD per night in the low season. I enjoyed eating my own lunch in the gardens here.

Our next stop was at Grey Glacier! Walk across the wooden swing bridge over the Pingo River to the wide open beach to see the huge blue tinted chunks of ice that have broken off this 28km long glacier! It's a whopping 6kms wide with a height of 30 meters before it divides into two at its front end. In 2017 a huge iceberg broke off Grey Glacier, in November actually, the month I visited! I also saw a boat tour cruising around the glacier while I was here. Kayaking around Grey Glacier is also possible as is hiking around the edge. It's quite spectacular to see a glacier for the first time, it was freezing cold!

Our final stop on the Torres del Paine National Park tour was the Milodon Caves (Cueva del Milodon). An absolutely gigantic cave where once lived a giant 2 meter sloth! The huge Milodon Cave was formed by the advance and retreat of glaciers which eroded the slopes of Benitez Hill. Later a lake was formed which helped to further erode the softer layers of the hill and later the lake level dropped to reveal this amazing natural monument! In 1895 the German settler Hermann Eberhard visited the largest cave in the Benitez hill and discovered a thick skin with long brown hair with embedded bones from an unknown animal. Years later the discovery would be identified as a Mylodon. Since then many studies have been undertaken to discover and learn about the caves history. Some of the other extinct animals that used to inhabit these parts of the Patagonia include the extinct horse Hippidion saldiasi, the large herbivore Macrauchenia and the Saber-toothed tiger. In order to really explore these caves and walk around the trails you need to do it in your own time. The tour took us only to the main Mylodon cave (1hr). The Overlook Trail (45mins) will take you from attractive vegetation to the top of the Milodon Cave to enjoy and appreciate the inspiring landscapes around the hill. The Caves and Eaves Trail (3hrs) starts at the Devils Chair - a huge geological rock that has breathtaking views. You can then explore the Small Cave, the Middle Cave, the forests, flora and fauna!

Hike To The Towers

If you want to hike up to the towers at Torres del Paine National Park, you can do that in a day, it takes 8hrs of walking, something like 10kms each way!

What would you do? 2 options. 1. Hike 8hrs up and down to see the rock towers at Torres del Paine, 4hrs each way. 2. Fullday tour in the park seeing lakes, lagoons, mountains, waterfalls, animals, ice & caves. Both options same price.

Around Villa Cerro Castillo between Puerto Natales & Torres del Paine is horse and cattle country. A gaucho waves while rounding up his cattle on horseback while another gaucho is training / taming his horses over wide green pastures! #horses #horse #wildhorses #Chile #Travel pic.twitter.com/Mp3VUXxIqn

Such an amazing national park is Torres del Paine, you will love it! The towers can be seen clearly from various points so no need to hike up unless that's your thing! I have tons of great photos from my camera, here's a few from my iPhone! #Travel #Chile #park pic.twitter.com/7CZcPjbZWP

One of the many places we stopped on the full day tour in Torres del Paine, Chile. There's a big variety of colours in the bodies of water in the park, turquoise, dark blue, greeny blue & many varieties of landscapes! #video #Travel #park https://t.co/jcPK7K0Sef pic.twitter.com/JWrEUmULZ6

We stopped for lunch at the beach, waters & hill around a hotel / restaurant in Torres del Paine National Park Chile, most brought their own food, some ate in the restaurant. We spent an hour here, a nice spot, mountains & a bridge! #video #Travel #park https://t.co/jcPK7K0Sef pic.twitter.com/jjvtG0zQGe

Towards the end of the full day tour to Torres del Paine National Park in southern Chile we visited Grey Lake, the end of the glacier at the beach. It was so cold my nose nearly fell off! Small pieces of ice were coming ashore. #video #glacier #daytour https://t.co/jcPK7K0Sef pic.twitter.com/OCzLiTJ9jV


View all photos in the Torres del Paine Photoset 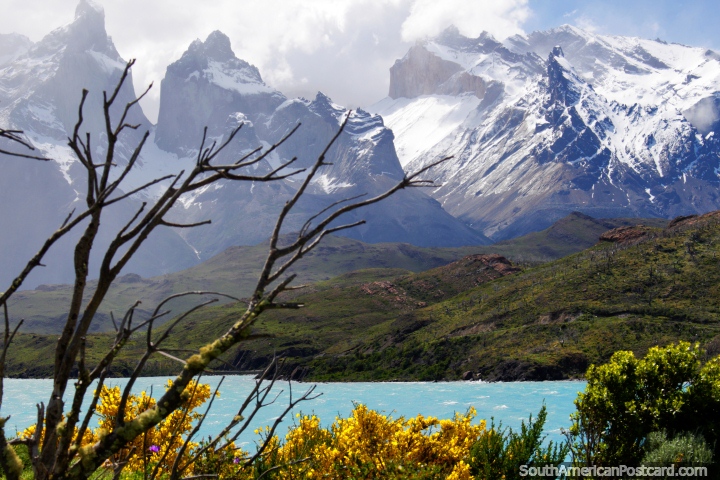