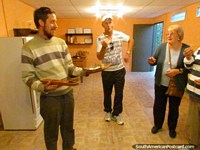 Cheese tasting at Qualtaye cheese factory in Mendoza, can I have some more please?

Walk around the circle of plazas in Mendoza while enjoying the sights in Mendoza.

Walk around the circle of plazas in Mendoza while enjoying the sights in Mendoza.

Mendoza is the center of winemaking and adventure tourism in Argentina, there is so much you can do here - snow sports, mountain climbing, wine tours, hang gliding, parachuting, kitesurfing, rock climbing, trekking, zipline canopy, horseriding, kayaking, longboarding, rafting and biking to name just a few. My main reason for visiting Mendoza was to do a wine tour and see the city. I arrived by bus from Santiago in Chile. The bus terminal is not in the very center of town, it's close at 10mins walk. Across the road from the bus terminal are a few restaurants, these are some of the cheapest in town, make the most of them, in the center everything is more expensive. There is a hostel across the road also but I walked into the center and found a cheap room in a hotel.

In the afternoon after my arrival I booked a tour for the next day for the afternoon, a tour to see some wineries, an olive oil factory and a cheese factory. I spent the morning walking around the city. Firstly I visited Parque San Martin, this is a huge park that covers a seriously large portion of the city. I only skimmed the surface of things to see in the park. I saw the lagoon and a bunch of monuments scattered amongst the trees around the lawns. Parque San Martin also has a zoo garden, theatre, a hill (Cerro de la Gloria) and an indigenous park. I would be careful if you are in this park. I was here 5 days before a botched robbery and murder took place in broad daylight. From here I walked back into the center and visited a bunch of plazas - Plaza Italia, Plaza Independencia, Plaza Espana, (Spain) and Plaza San Martin. There are a ton more plazas in Mendoza, nice shady leafy relaxing places! I had a city map and walked in the direction of some historical sights several blocks out of the center. I came across a little graffiti art, but in the end I gave this a miss and headed back into the center, it didn't seem safe. Actually a couple of times in the central city while I was walking from plaza to plaza locals told me to put my camera away because it was not safe. I visited Paseo Alameda, a 7 block pedestrian walk built in 1808 where there are a lot of colorful flower stands. It also has a museum, restaurants, pubs and cultural area. In the center of the city is Paseo Sarmiento where there are many outdoor restaurants all next to eachother. I enjoyed a meal here one evening but it wasn't so cheap.

The afternoon of my tour arrived and my group of about 9 set out by van to the first winery 'Bodega Domiciano'. We had a quick look around the factory and then got down to business with some wine tasting. Afterwards we had a look at the vineyards and listened to the guide speak about wine etc.

Next we drove to an olive oil plant called 'Pasrai'. We listened to their guide talk about the process of making oil and saw the factory before we had a fantastic taste test. They gave us plates and plates of delicious bread pieces with toppings like dried tomatoes topped with dripping olive oil. It was fantastic and I made the most of it!

Our next destination was to another winery called 'Florio'. We had a very friendly and informative guide who showed us around the plant and again we then got down to business with the winetasting. This time we got quite a lot of wine to drink. I lost count of the glasses and I certainly was not spitting it out.

Lastly on this tour we went to a cheese making place called 'Qualtaye'. We had a quick look around, saw a cheese making room and then tasted a little cheese. Several people in my group bought products at each place we visited but I didn't. It is just not practical carrying glass wine and olive oil bottles around in a backpack. It was a very enjoyable day though and by early evening we had arrived back in central Mendoza.

Early the next morning I took a bus 2hrs 15mins north to San Juan. Distances to some other places in Argentina from Mendoza: Cordoba 622kms, Neuquen 791kms, Buenos Aires 1048kms and Salta 1261kms.


View all photos in the Mendoza Photoset

Wine Aparts, Mendoza, Argentina (December 2021 - 2 nights) - Wine Aparts for the price is very good at $21USD for 1 person. Average sized room with a big bed but small bottom sheet wasn't secure and didn't cover the bed properly. Fridge and kitchen area. Cash only which means you need to add on bank fees when going to the cash machine. Private bathroom, breakfast included and a good location in the central city of Mendoza.

Galicia Hotel, Mendoza, Argentina (April 2014 - 2 nights) - I stayed in the smallest room available, it was half the price of one of the normal rooms. The room fitted a single bed and then had about half a foot of space down the side for my things. It was a tight squeeze, possibly the smallest room I have ever slept in. Fine for a couple of nights and better than sleeping in a dorm. Located in the center of town, the girl at the front desk was very helpful.
Argentina Travel Blog | Photos of Argentina | Festivals in Argentina | South America Videos 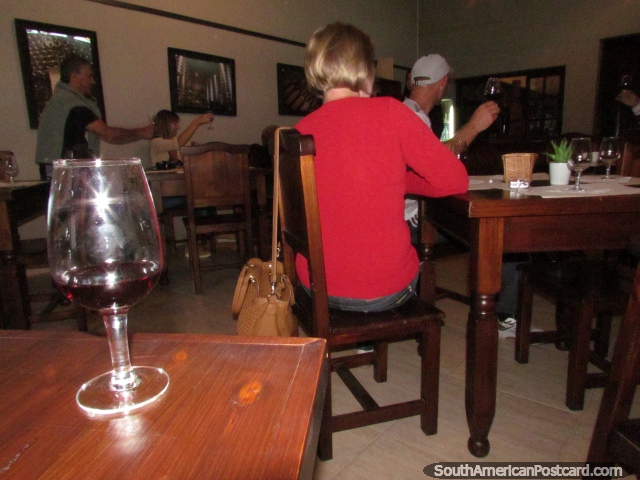