Cordoba, Argentina - Top Must See Is The Gothic Church

Figure of Jesus above the main door at the Church of the Capuchins in Cordoba, tree with purple flowers.

Stonework of 2 men holding up the Church of the Capuchins in Cordoba.
Map location: Cordoba, Argentina

I have visited Cordoba 3 times now, it's very much the same as any other Argentine city in the way it looks. In fact, while here I was thinking to myself that I could be in Buenos Aires, Rosario or Salta. Argentinian cities tend to start looking the same after a while with their abundance of statues, monuments and grid pattern streets. If you have been to or are going to Buenos Aires then a stop in Cordoba may not be necessary, it is kind of a small version of the capital in a way. However, if you enjoy the theatre and arts, Cordoba is known as the cultural capital of the Americas. There is much to see and do around the city and the nearby mountains offer travelers activities such as climbing, trekking and biking. I arrived in Cordoba (the 2nd time I visited) by bus from San Juan (9hrs).

Starting from Cordoba's main square Plaza San Martin and it's statue of Jose San Martin on his horse. The plaza has a fountain and bench seats located under palm trees. The attractive cathedral is on one side as well as other historical buildings. Beside the cathedral is Pasaje Santa Catalina, a lane that serves as a memorial to a bunch of people tortured and murdered in the mid 1970's, there are photos of these people hanging above the lane. Nearby is Plazoleta del Fundador with a statue of Cordoba's founder Jeronimo Luis de Cabrera (1528-1574) and church Monasterio de Santa Catalina de Siena (1814). The pink church Iglesia y Monasterio San Jose Carmelitas Descalzas (1622-1770) is a national historical monument. Next to it is the house where Argentina's first poet Luis Jose de Tejuda was born in 1604. The streets around Plaza San Martin are quite leafy and shady. Away from the center a little I came across church Basilica de la Merced with its murals on the outside walls and monument to San Pedro Nolasco (1189-1256). There are a ton of churches and they all look different from each other. I saw Iglesia San Jorge (1926), the pink and white wooden church Iglesia del Santisimo Sacramento and the stone Capilla Domestica (1644/1688). I walked along the Paseo de las Flores where on each side historic facades face the street. Here I saw the national monument Legislative Palace and art for sale on the sidewalk. Funny, for a place called 'The Flower Walk' (Paseo de las Flores), I didn't see any flowers. I was back at the main plaza where the tourist office is located on one side, there is a small museum / church nearby called 'Museo Eclesiastico Dean Gregorio Funes'. That was day 1 in Cordoba.

On my 2nd day starting early morning from the main plaza I walked about 8 blocks to Cordoba's main park called Parque Sarmiento. I started at Plazoleta Dean Funes near a bunch of bronze busts and monuments and entered the park. Parque Sarmiento is not a bad place, there's a lagoon, bridges to 2 islands and heaps of space. How safe it is I am not sure. I was told by someone to keep my eyes open and also I saw a bunch of homeless people sleeping right in the middle under one of the bridges. The park has an exercise station called 'Estacion Ramon Carrillo' with exercise equipment for locals to use, a family turned up to use it while I was here. There is an outdoor theater called 'Teatro Griego' near the monument of Italian poet Dante Alighieri (c. 1265-1321). Outside Park Sarmiento is Plaza Espana with a bunch of stone sculptures.

6 blocks up the road from Plaza San Martin in the city centeris the most amazing Gothic church called 'Parroquia Sagrado Corazon de Jesus Padres Capuchinos'. You really need to see this church to believe it, talk about fine detail and an intricate facade. I would rate this church as the most mind-blowing sight to see in the whole city bar none, a must see! In the evenings the church is lit-up with lights and looks spectacular. It's a huge tourist attraction indeed! It was designed by architect and painter Augusto Cesar Ferrari, construction started in 1926 and the church was inaugurated in 1933.

On my 3rd visit to Cordoba I decided to go on the city bus tour which leaves from the main plaza - Plaza San Martin. Sitting on the top deck is the best idea. It's a fun drive around the city and you will see many of the sights I have already mentioned plus the new government palace. They take you past the great gothic church but you must go back later on foot to really see it. A bus tour can give you a good idea of how the city is laid out.


View all photos in the Cordoba Photoset

Cordoba Bed & Breakfast Hotel, Cordoba, Argentina (November 2019 - 2 nights) - If you call yourself a bed and breakfast hotel then you should put on a decent breakfast for the people staying there! Bread, butter, jam, coffee and orange juice is not breakfast. No eggs, cereal or fruit? I didn't bother eating breakfast here on both mornings I stayed here. I went into the city instead. The bedroom was fine with a comfortable bed, private bathroom, tv and wifi. I paid $33USD per night to stay at Cordoba Bed and Breakfast Hotel. It's about a 10min walk to the center. If only they had put on a good breakfast I would recommend this hotel but sorry I can't.

Cordoba Backpackers Hostel, Cordoba, Argentina (April 2014 - 1 night) - This hostel is located about 5 blocks from the central plaza in a slightly crazy part of town. I got a private room for $90 pesos - a good price, shared bathroom of course. The hostel has everything you need for cooking, wifi, large outside patio and tv room. There are shops and street markets outside and all around. Seemed like quite a laidback place to me. Recommended.

Residencial Nueva Trinidad, Cordoba, Argentina (April 2014 - 1 night) - A rent by the hour type of hotel located near the bus terminal. I had a room with bathroom and cable tv. I intended to stay 2 nights but they wanted to double the price for the 2nd night because it was a Friday so I left. There are several cheap hotels just around the back of the bus terminal if you arrive late or don't want to go searching around town for something better. Can't really recommend a place like this though. 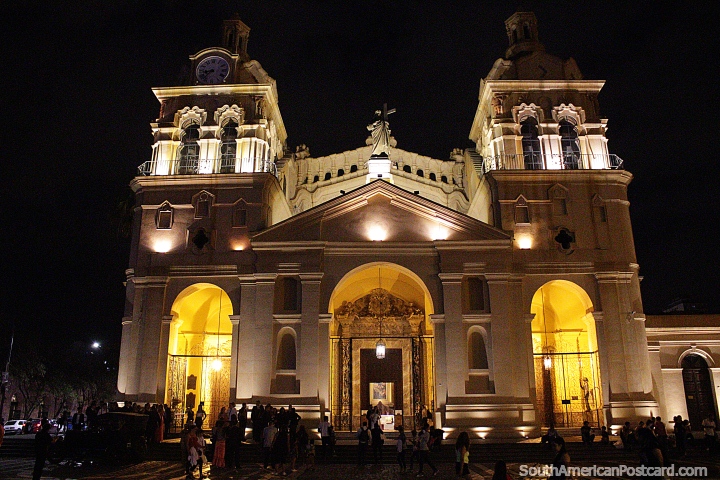