The lake region around Villa La Angostura is a beautiful place to explore.

River and forest area in Villa Traful beside the lake - peace and tranquility.

The Minero River near Lake Traful, a small river and not too rough.

I decided in Bariloche that I would not do a tour but hire a car and do my own daytrip instead! I happened to mention this to my sole dormmate in the hostel I was staying at and he said he would also be keen to come along for the ride and share the cost. I said that I would be happy to pay for the car if he would pay for the gas. Settled! I had planned to drive south to El Bolson but my friend being Argentinian and having more knowledge of the area than I suggested a better idea. Being, that we head north out of Bariloche on Route 237, then at Confluencia turn left onto Route 65 and head west through Villa Traful. Once we reached the end of Route 65, turn right and head north again on Route 40 on the 'Road of 7 Lakes' up to San Martin de los Andes. Then on the way back, head south on Route 40 all the way down to Villa La Angostura and continue back to Bariloche. Sounded like a great plan to me, lets go!

I spent sometime shopping around and enquiring about car rentals in Bariloche. Hertz and Europcar have the best deal. $70USD for 24hrs with free kms, no drop off. Some companies are cheaper but do not have free kms, this is OK if you are going a shortish distance but I was careful to measure out the distance of the trip on a map and there's no way I'd do it without free kms (so that all costs are known upfront). A credit card backing is required for insurance purposes, for me it was $900USD. They do a semi-transaction for this money but it doesn't get taken out of your bank account. They can put it through later if you have an accident etc. Drive carefully! I used the car from 8:30am through to 9pm but returned it at 8:30am the following morning. My 1st rental car and no damage done!

In Confluencia 66km north of Bariloche at the junction of Routes 237 and 65 is where Limay River, Alicura Reservoir and Traful River meet. Route 65 is an unsealed road running through the middle of Nahuel Huapi National Park. The road runs alongside Traful Lake and passes through Villa Traful - a small hamlet (human settlement). Between Confluencia and Villa Traful is the Minero River which made a nice stop. There are horses in paddocks around here with beautiful views of snow-capped peaks surrounding. Soon Traful Lake comes into view and it's a spectacular sight indeed! Traful Lake is quite huge at 38kms in length but is not officially one of the seven lakes on the famous 'Road of 7 Lakes'. Route 40 where we are heading is officialy the 'Road of 7 Lakes'! Villa Traful is a popular place for camping and sport fishing in the summertime, horse riding and trekking are also big drawcards!

The Road of 7 Lakes

Route 40 is the 'Road of 7 Lakes'! The 7 lakes span the distance between Villa La Angostura and San Martin de los Andes which is 108kms. They are located in this order starting in Villa La Angostura (southward) and heading north up to San Martin de los Andes - Lakes Correntoso, Espejo Grande, Escondido, Villarino, Falkner, Machonico and Lacar! As you drive along the road each lake has a lookout point and an information board. I should mention at this point that several of the lookout points are located on dangerous blind corners with little warning beforehand. I was unable to stop at some of them because of this! Lakes we stopped at were Lake Escondido (hidden lake, cant see it), Villarino Lake, Lacar Lake in San Martin de los Andes, Falkner Lake and Nahuel Huapi Lake near Villa La Angostura. Not far south of San Martin de los Andes is Arroyo Partido (The Divided Stream). The waters come from the melting ice and snow of the surrounding mountains. Not far from the bridge is a wedge of rocks, the waters collide with the wedge of rocks forcing them to divide into 2 arms. The right arm feeds Lake Lacar and runs through Valdivia in Chile towards the Pacific Ocean, the left arm feeds Lake Meliquina and runs all the way to the Atlantic Ocean at Viedma! San Martin de los Andes is a beautiful lakeside town known for birdwatching and of course adventure sports and activities and golf. The lakeside beach makes a pretty picture with its surroundings in Lanin National Park! At the other end of the 'Road of 7 Lakes' is Villa La Angostura, a resort town with wooden Alpine-style houses. It's located on the shores of Nahuel Huapi Lake and is also known for sport fishing. The chocolate, beer and arts and crafts also make Villa La Angostura a special place. I had passed through Angostura before when I came over to Argentina from Osorno - Chile. There is plenty of fun to be had in the summertime in this area - think rivers, lakes and mountains! All in all it was a fantastic day touring around this part of Argentina in a rental car!

Occasionally you make a good friend while #traveling, my dorm mate. I hired a car, he payed the gas, #daytrip north of Bariloche! #Travel pic.twitter.com/TCGS5738y4 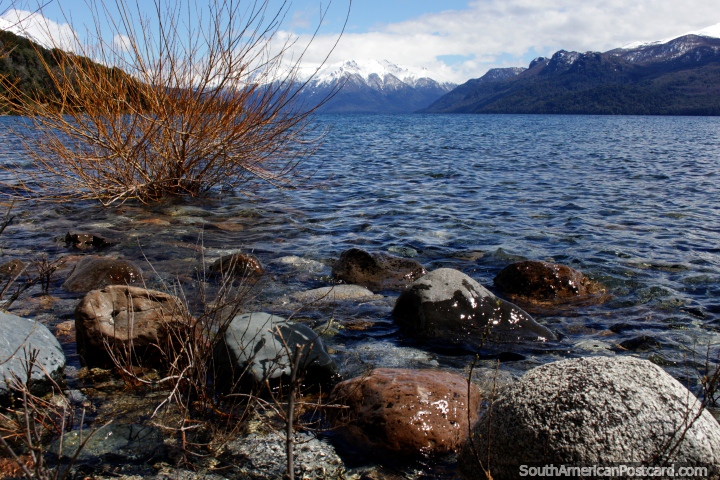